ClaytsFM is a streamer who regularly streams great Football Manger content online, including his latest advetnure with the PES Master League team in FM 20. He wrote about his experience for us.

Three words but so many emotions. The mere mention of them will have any former Pro Evolution Soccer player taking an immediate trip down memory lane, waxing lyrical about a special bond formed between them and the gloriously shit default players assigned to them at the start. 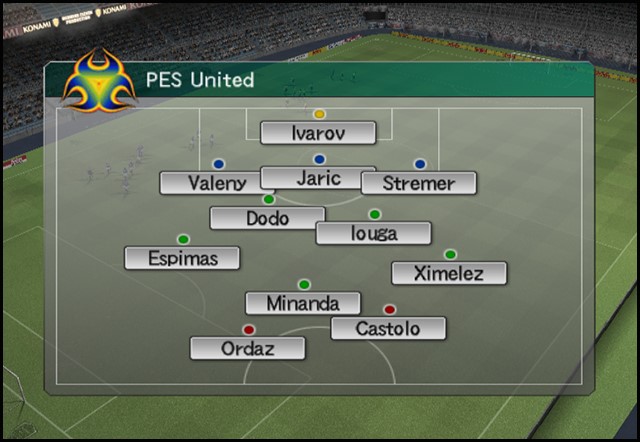 Everybody had their favourite.

“Ximelez was the real star, like Espimas but less flash.”

The truth is that they were all terrible but that did not stop us loving them. Slowly but surely, they would be replaced by “real” players as your Master League team improved, but too late - the Master League default players had secured their place in your heart.

I missed this. And the truth is that Pro Evo isn’t what it used to be. At least not to me. Football games used to be fun and now they seem a bit like hard work. It was this, combined with the rather important fact that we literally have to stay at home, that prompted me into a labour of love. I was going to bring back the original PES Master League Defaults… in Football Manager 2020.

Did it take a long time? Yes. Was it worth it? Yes. 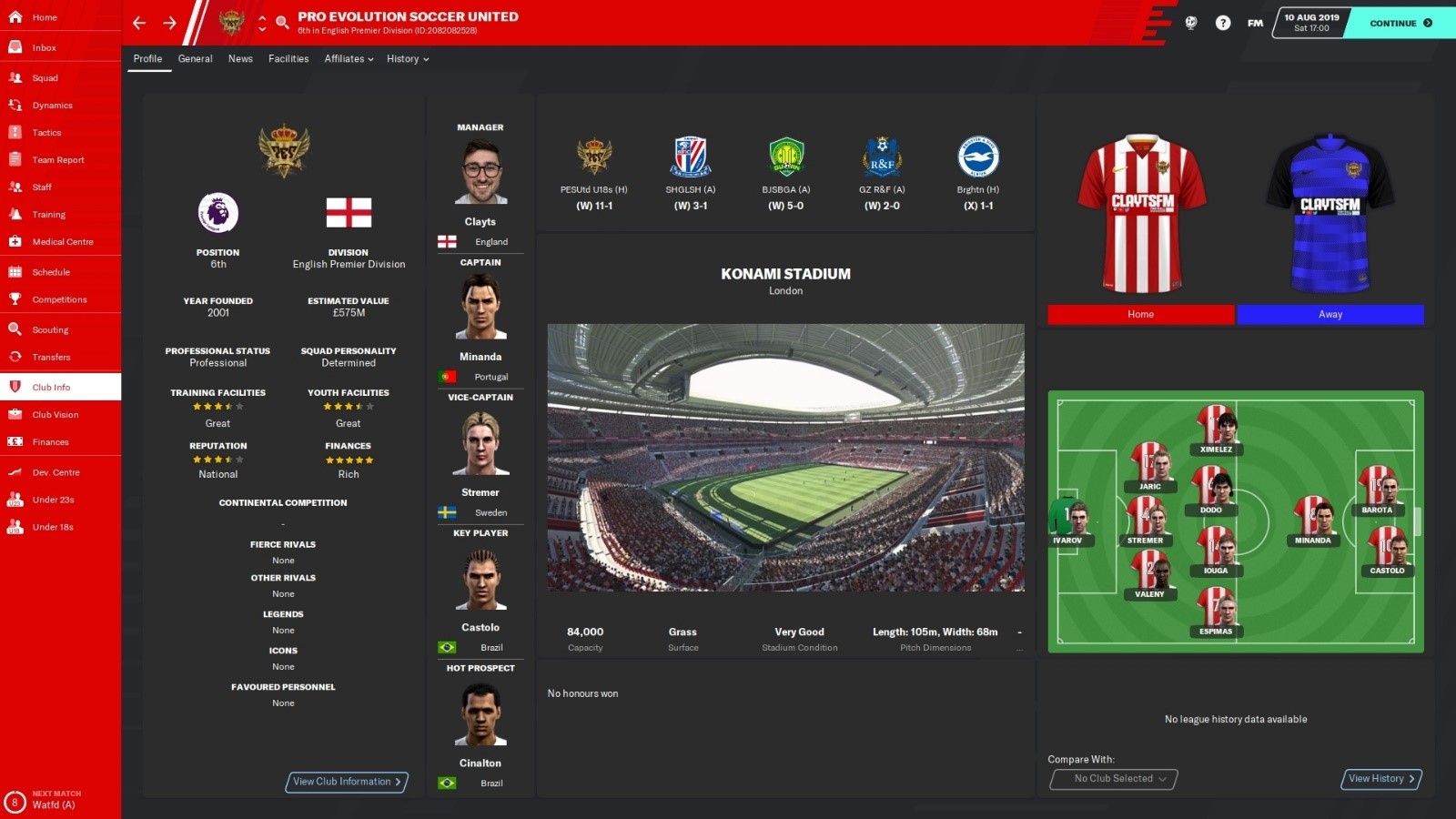 In true Master League style, I didn’t half-arse it. Back in the day it was spending hours trying to make a little Adidas logo in the kit creator and nowadays ... well it was the exact same really. I’ve gone full whack: kits, badges, player facepacks and the Konami Stadium.

PES United in the Premier League

Once everything was created it was time to put PES United in the Premier League and see how they'd fare.

I've decided to give it a season with no signings. I did spot a certain youthful looking at Adriano at Flamengo but maybe that’s one for the future… 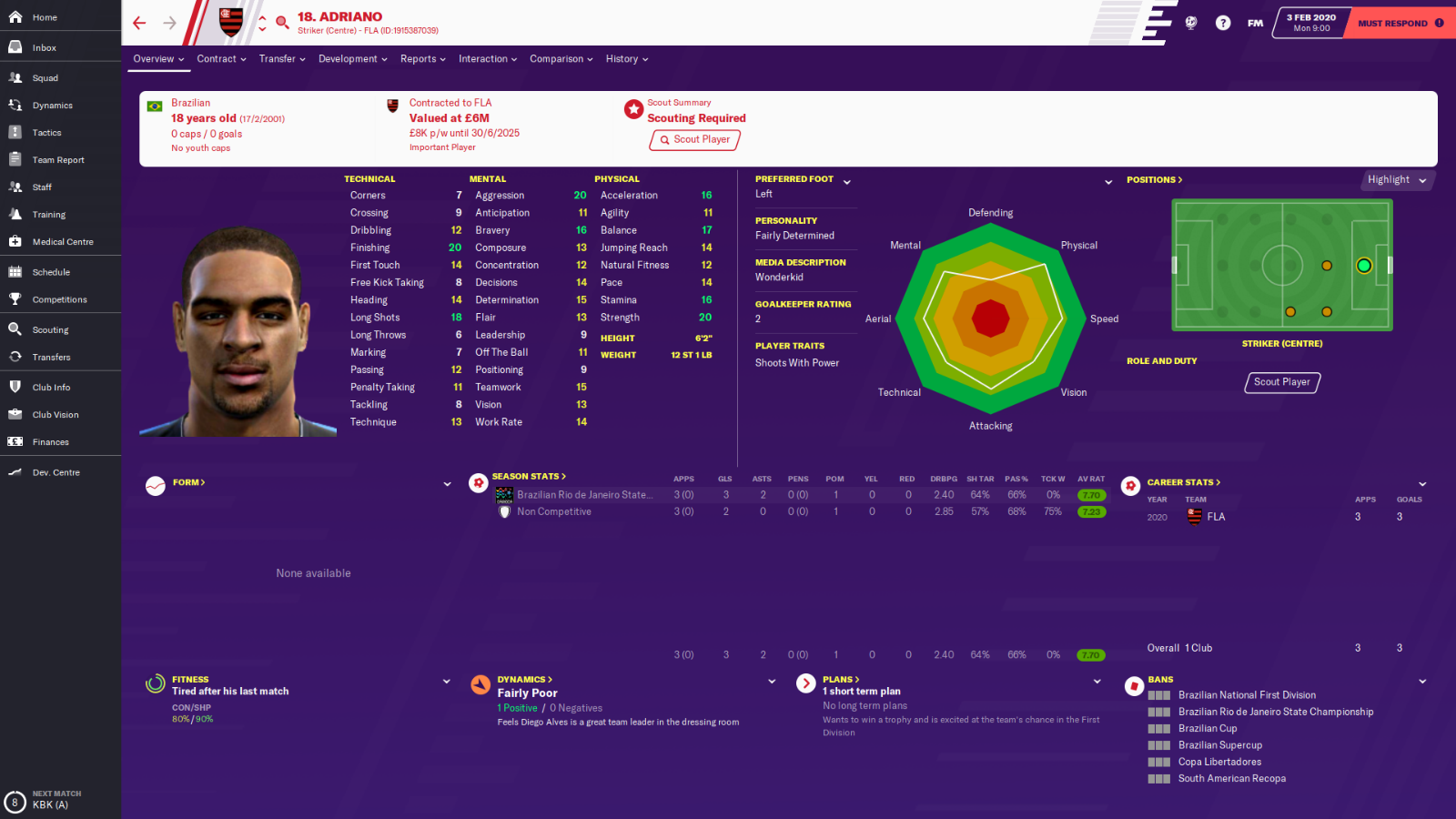 Tactically, it’s a 3-5-2 deal as it always was at the start of a Master League. You were never blessed with good full back options and Gierson and Ruskin look a bit off it here too. I decided to go with this for a first league game up against Brighton and Hove Albion. It did occur to me that they would have been called Seagull White and Blues or something. Or was it East Sussex actually?

Ivarov in goal, Stremer, Valeny and Jaric at the back. The latter mainly included for his 20 attribute for free kicks. A flat midfield four including Ximelez and Espimas out wide with the midfield maniacs; Dodo and Iouga in the middle. The boys will be snapping into tackles and doing the dirty work so that their silky Portuguese teammate in front of them can shine – Minanda plays in the hole behind the strikers. Up front it was a toss-up between Barota and Ordaz, I’ve opted for Barota and he’ll partner the star of the team: the fleet-footed, corn-rowed Castolo. 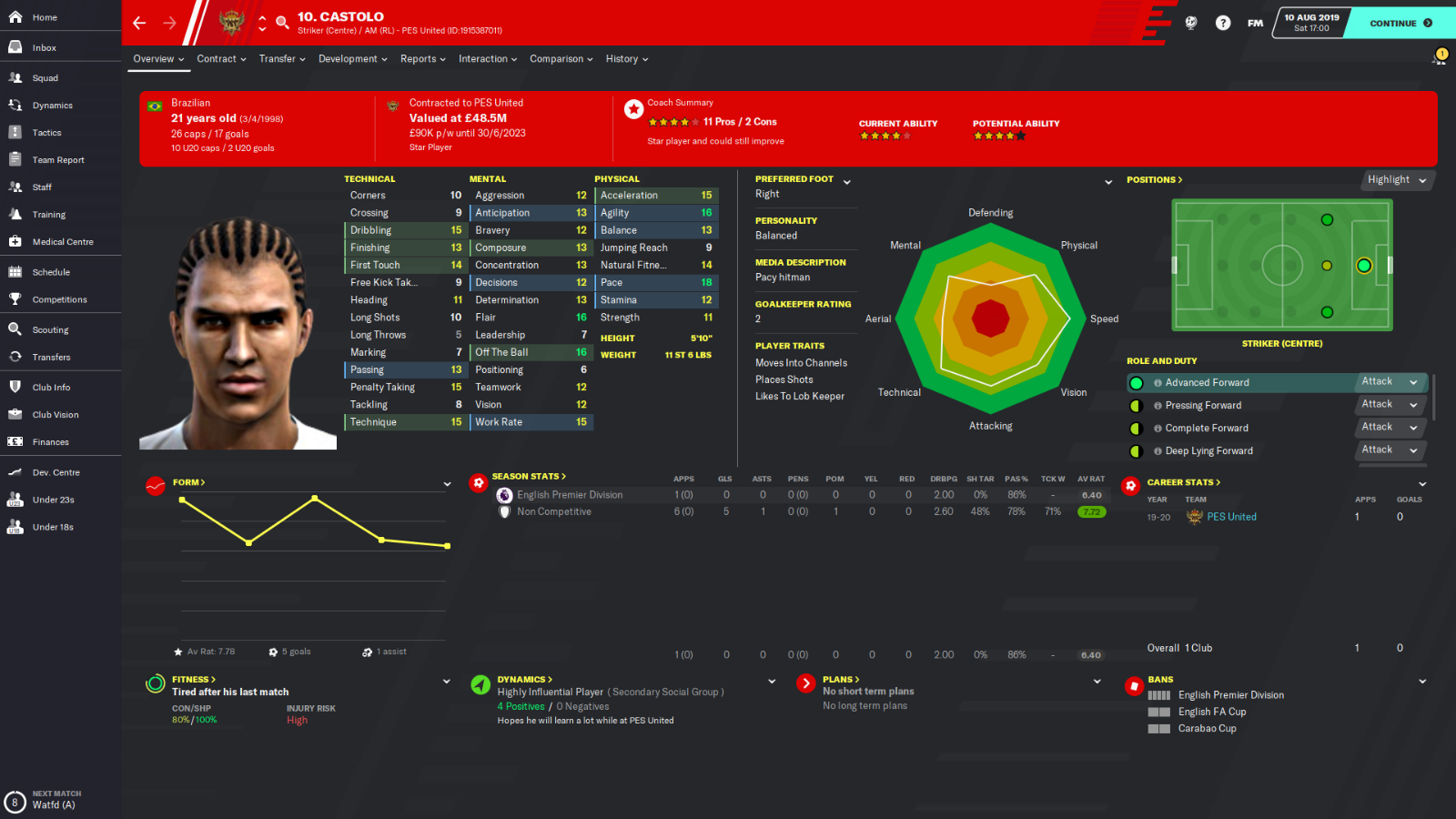 Into the game we go and it’s a quiet start. Then, after surviving a Pascal Groß scare at the other end, Espimas whips in a lovely ball and its headed home by Barota. A bullet header from the edge of the box. 1-0.

That takes us to half-time, and an *assertive* “I expect more from you in the second half” seems to have gone down well. Until the 47th minute. Shane Duffy heads home and it’s 1-1.

And that’s how it finished. A futile attempt to scrape a win by throwing on the youngster Huylens fails and it’s a point a piece. Plenty to build on. 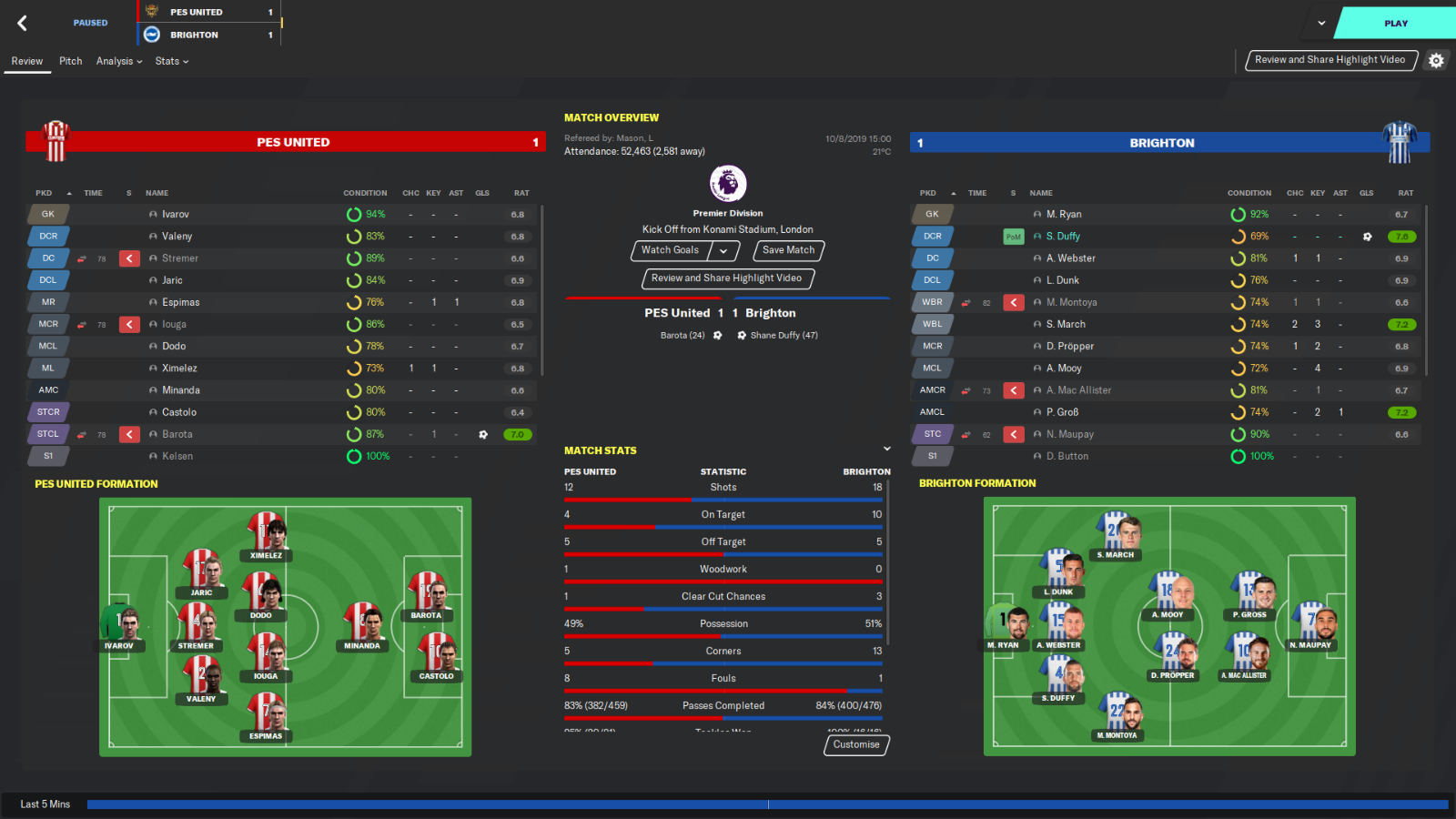 After that game, I decided I was curious. I holidayed until the end of the season to find out how they would get on.

Finished 19th. Got sacked and Steven Gerrard took the job.  And thus, my Master League dream was over. Probably should have bought some “real players”. 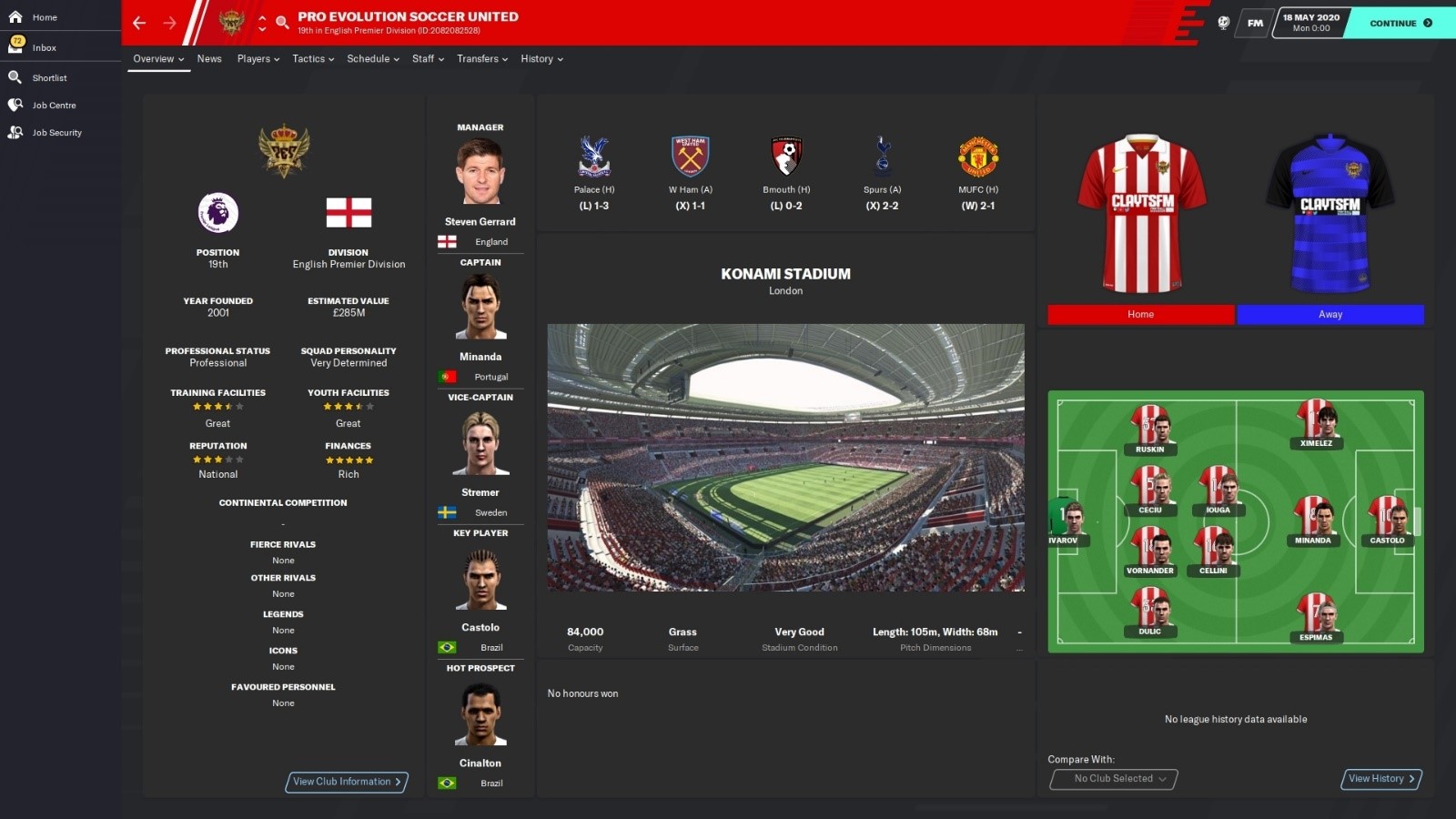 While it may have ended in disappointment for me, it needn't for you.  The database file, as well as all of the resources included (facepacks, kits, stadium photos and badges) are available to download for free.  Find the download links in the YouTube description and also have a watch for a more in-depth analysis of my season.

Find Clayts online in these places:

See Also: The Default Pro Evo Master League Players - Where Are They Now?