Review: Rugby 18 Is A Broken Disgrace Of A Video Game

As some who has played just about every sports video game I possibly could since around 1997, Rugby 18 is the first I have experienced where having a knowledge of the sport in question is a disadvantage.

I didn’t expect this game to be good, in fact, I knew it would be bad, but such is my desire - a desire I know for a fact many Balls.ie readers share - for a Rugby game I can play casually with friends and have a laugh, that I felt compelled to give it a try.

I paid €59.99 from the Xbox Live marketplace, within five minutes, as I started the tutorial upon loading the game up for the first time, I realised I would regret that decision. This game is completely unplayable, broken in the most fundamental of ways, and for it to be released in the state it is screams that this was pushed out to take advantage of the Christmas market and serve no other purpose.

It sounds harsh, but it really is that bad. The game you play when you start a game is just not rugby. Players have no sense of their position, they roam freely around the pitch like they have no clue what is going on. This means you will, at every breakdown, find props on the wing, scrum halves nowhere to be found, and - with infuriating regularity - all of your players standing within five meters of the ruck.

Here's an exmaple; I've picked the ball from the base of the ruck, and all 30 players are within close enough range that they could talk without raising their voices. The opposition looks as if they are about to do a haka. 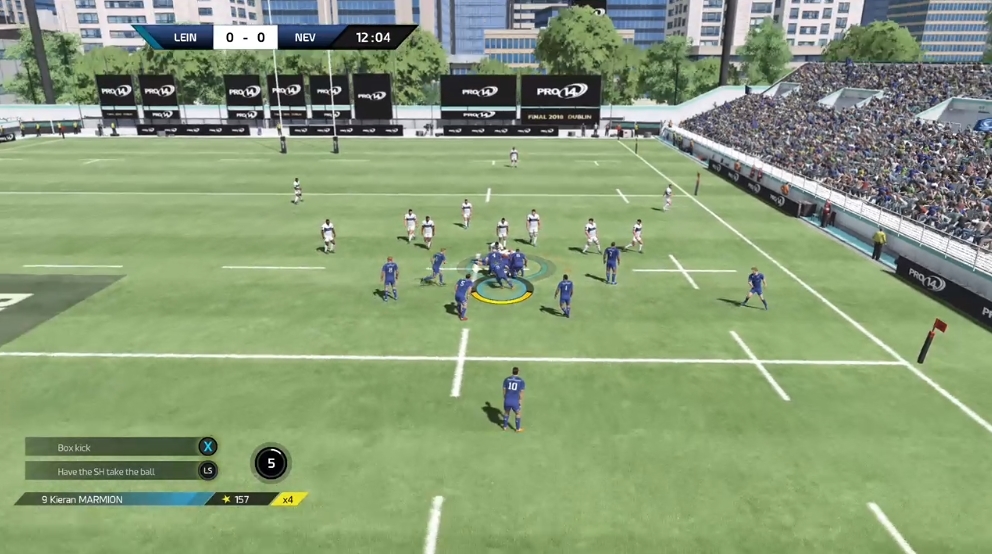 It's not a one-off either, it's at literally every breakdown. 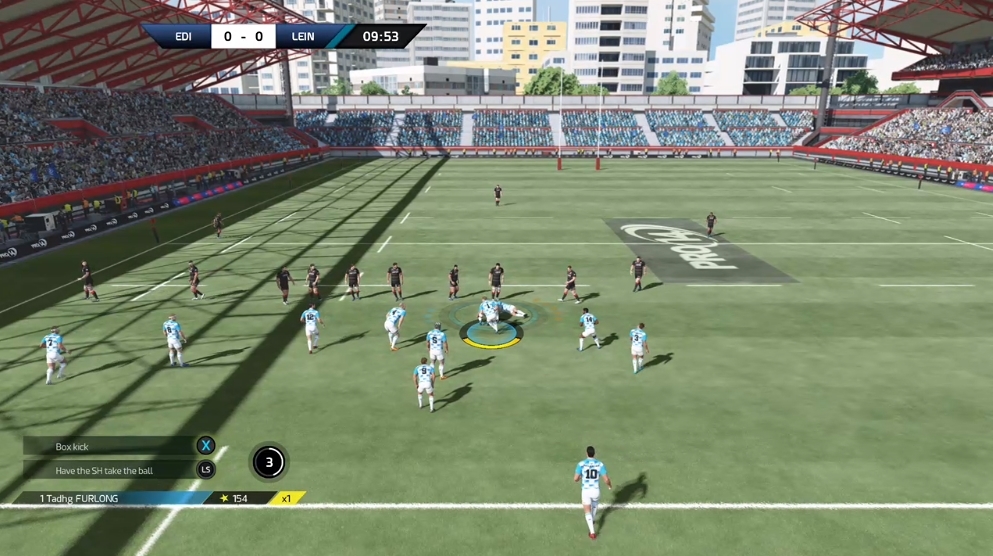 And then there are the rucks themselves. In the real sport, a battle for the ball at the breakdown usually takes no more than five seconds to see the ball offered for a scrum half. Otherwise it is known as ‘slow ball’. Well, in Rugby 18, every single tackle is followed by a rucking mini-game that can take up to 20 seconds to complete. You will spend more than half of your time in a match mindlessly adding players to rucks to win the ball after every tackle.

The passing is absolutely wild and unpredictable, thanks largely to the embarrassing positional play of the players around you. On the rare occasion that you do make more than five yards on a carry, something that seems only possible when a tackle is missed (again, this seems to be totally random) opposition forwards will effortlessly track you down and catch you no matter who they are.

Also, in every game that I have played a game-breaking bug where the opponent just runs through your player as if he were a ghost occurred far too often.

At this point I’m aware it sounds like I have a personal vendetta against the developers and staff behind this game, but the reality is I sympathise them, as they were given an impossible task.

Rugby 18 is built on the same engine that the awful Rugby 15 game utilised, only somehow things are now worse, and further from the sport than ever before. They do not have the budget to rebuild this game from the very bottom up, something that desperately needs to happen before another rugby game is made.

Big Ben Interactive is a small studio that cared enough about the sport to at least attempt to give the fans a game to play, and I respect that, but there is no way this game should have made it past testing. It either should have been scrapped, or shelved until they found a way to make it somewhat playable.

It took me three goes to finish a game without quitting.

There is no fun to be had in Rugby 18. Every single thing you do on the pitch is a chore. There are three difficulty levels which boil down to:

Amateur: Win every ruck, so you never lose the ball.
Semi-Pro: Flip a coin at every ruck.
Pro: Lose every ruck.

There is no sense of achievement in winning, only relief that the game is over.

Visually, this is an early Xbox 360/PlayStation 3 title at best. The players look absolutely nothing like their real-life counterparts, the animations are clunky and awkward, and the cut-scenes - of which there are a baffling amount of in a single match - are robotic and cheesy.

The commentary reminds me of International Superstar Soccer on the Nintendo 64 where the commentator says the team's name clearly differently to the rest of the sentence, such as; 'This is an exhibition match, between... Wales? And... NIGERIA!'

The licensing in terms of teams and leagues are impressive for the European clubs. You'll find the Aviva Premiership, Top 14 and D2, and Pro 14 all fully licenced in terms of kits and player rosters, but that is about it. The game should be called European Club Rugby 18, it would be fairer to the consumer. I can't imagine too many Aussies or Kiwi's are dying to play out a Pro 14 season, which has to be a massive chunk of potential buyers.

There are international teams available, 8 of them to be exact, meaning you can't do a World Cup, and you can't even do a Six Nations campaign because Ireland just aren't there. We don't exist. The 4th ranked international side in the world at time of writing isn't in the game.

The British & Irish Lions are in though, and they are full licenced. It's just a shame there is no tour mode to use them in, so you can only play exhibition games with them. Great.

The player ratings - as we discussed recently - are a total shambles. Owen Farrel and, comically, Finn Russell are 97 overall. Maybe I haven't been paying attention put I'm quite sure Finn Russell is not the best Scottish player who ever lived. Conor Murray, meanwhile, is an 89.

In terms of game modes, an attempt was made to deliver an ‘Ultimate Team’ mode where you play games to earn coins and gradually improve your squad, and then get put into an old school Pro Evo style Master League where you must work your way up the tiers.

It sounds like a good idea, and it is, but once again the execution is lacking. You are giveN so little in terms of budget at the start that you can only afford the absolute worst players in the game, therefore making it nearly impossible to win games and improve your squad. 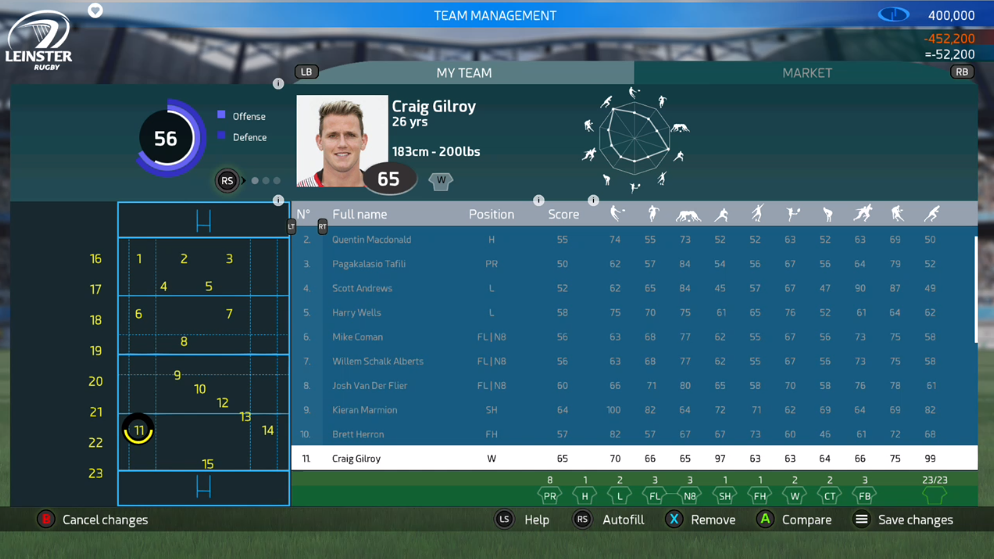 I tried to build the cheapest squad I could, and add in Craig Gilroy - who is a 65 overall rated player inexplicably blessed with 99 pace - so I had one player to try and attack with, but I started the season 50,000 credits over budget. You earn credits from each game, but not enough to pay back the crippling debt of having 23 players.

If you are in the red at the end of the season, your career is over. Fun.

Aside from that you have a Season mode, where you can play a campaign from one of the licenced leagues, and exhibition mode, as well as the ability to play online against a human opponent. There really is nothing to keep you coming back to play more. It's so shallow, which would be forgivable if the gameplay was enjoyable, but alas.

I did manage to find one posisitve about the game. In between loading screens you are presented with a little trivia question that will offer you a small amount of points to use in career mode. This is a lovely use of dead space and absoltuely everybody loves a quiz. 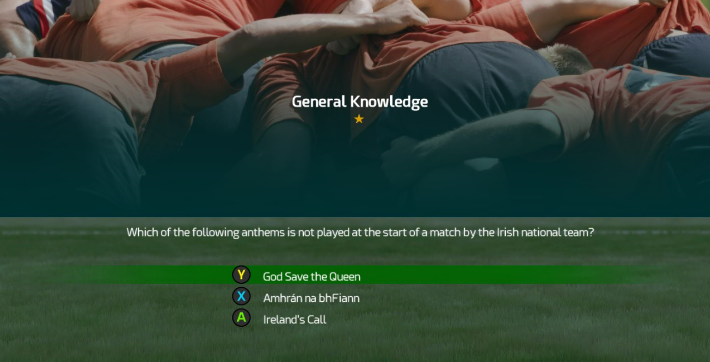 I’ve bought bad games before, I’ve played some truly awful games in my time, but Rugby 18 is right up there (or down there in this case) with the worst of them. The other reviews you'll find online are all negative, and the game's Facebook page features waves of comments angrily demanding that they fix their broken game on every post that is published.

If you have read one of my game reviews on here before, you'll know I am very rarely this negative. I love sports games, I truly do, and I approach every new release with an optimism that this might offer me that moment where you pull something off that is true to life and provides that immensely satisfying feeling. I remain hopeful that the 2019 World Cup will inspire a big studio capable of making a good sports game will take it on board, but I know we'll just get another re-skinned Rugby 08, which is still better than Rugby 18.

This is not a rugby game, it’s a slap in the face to anyone stupid enough to spend their money on it.

It is clear they were very eager to get this game released before Christmas, and unfortunately a lot of parents are going to see a rugby game, buy it for little Johnny's PlayStation and then wonder why their darling son isn't talking to them anymore.

I'm not going to rate 'Rugby 18' out of 10. It's not worth it. I don't understand how it is acceptable to release a game that is so blatantly unfinished. If this was a budget-title, a bargain bin release with an average player's name attached to it - like Jimmy Gopperth's European Rugby Challenge 2018 - then that would be one thing, but to charge €59.99 is nothing short of a disgrace.

Gaming
4 years ago
By Mikey Traynor
Watch: First Gameplay Footage Of Rugby 18 Is Exactly What We Expected
114

Football
4 years ago
By Mikey Traynor
The Irish Player Ratings In Rugby 18 Are Absolutely Wild
Gaming
4 years ago
By Mikey Traynor
Watch: First Gameplay Footage Of Rugby 18 Is Exactly What We Expected
Gaming
4 years ago
By Mikey Traynor
Why We Just Can't Get Excited About The New 'Rugby 18' Game On Xbox One/PS4
Popular on Balls
Football
22 hours ago
By Luke Delaney
Europa League Final: Five Arrests As Frankfurt Supporters Attack Rangers Fans
GAA
1 day ago
By Luke Delaney
Jackie Tyrell Calls For 'Accountability' For Players Who Feign Injury
GAA
23 hours ago
By PJ Browne
'I Had Some Troubles In My Later Teens. GAA Wasn't A Big Thing For Me'
Football
1 day ago
By Colman Stanley
Wagatha Christie Trial Sheds New Light On England's Euro 2016 Disaster