Back when we heard the news that after years of nothingness we were finally going to get a Rugby game in 2015, we didn't know how to feel.

Of course, there was initial excitement, but that soon began to shrink as time went on and we heard feck all about a game that so many Irish rugby fans were desperate for, but only if it was actually worth playing. What we did hear was uninspiring, and when the game was eventually released in late 2014 it went almost totally unnoticed.

In fact, having been denied a review copy (it's easy to see why now), I myself didn't get to play Rugby 15 until around the time of the 2015 Rugby World Cup, and I was extremely underwhelmed even with a few beers on board to lighten the experience.

Last month I was given a lend of Rugby 15 for Xbox One to finally sink my teeth into it, and it's totally unplayable. Aside from being a worse rugby game than EA Sports Rugby which was released on Playstation 2 back in 2001, the attention to detail is is pathetically poor, as you can see by the options I was presented with when I went to pick my first Ireland squad.

If you don't have the licences for real player names, that's fine, but don't take the piss... 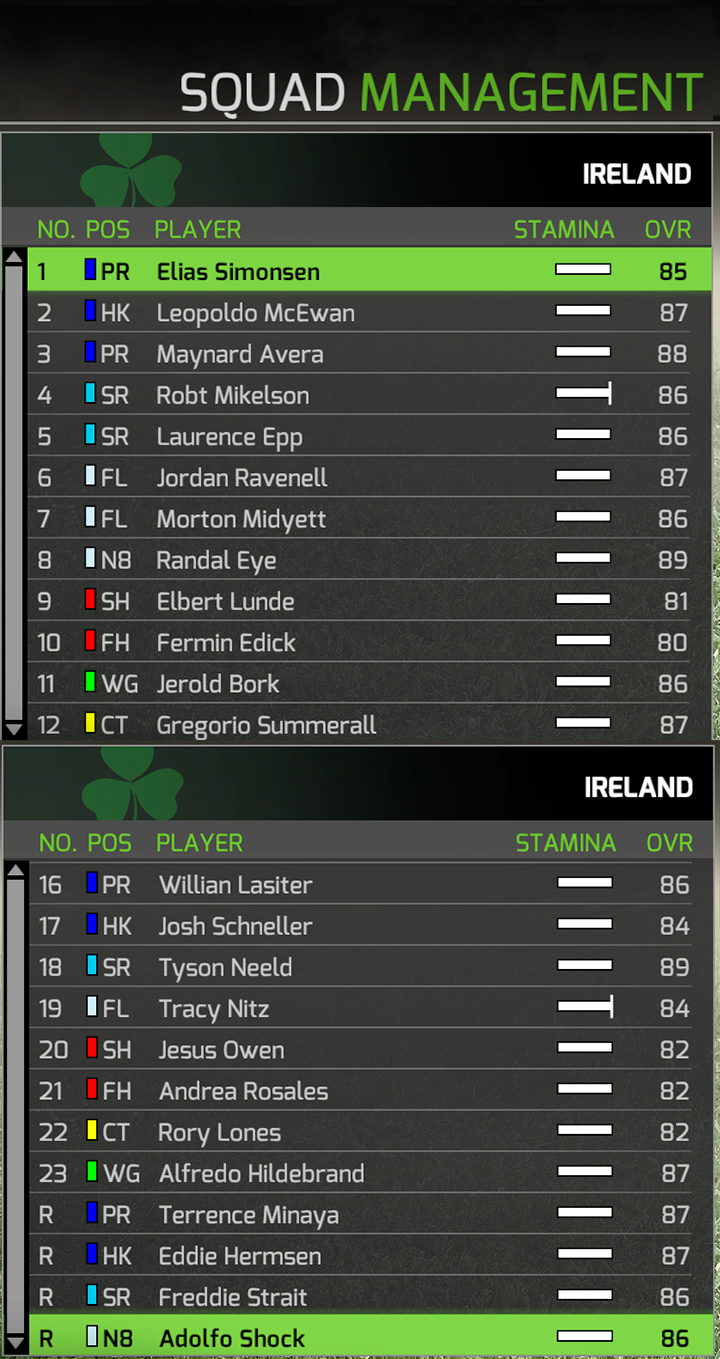 What a joke. Those are randomly generated names, or must be, as if a human chose them then surely they have never so much as even heard of the country of Ireland.

Here are the highlights:

The surname somehow fits, but you don't see too many Leopoldo's trotting around the place. Not only is it not an Irish name, but a quick google shows that the only really well known Leopoldo is a politician from Ecuador.

A Scandanavian professor of psychology has usurped Conor Murray as Ireland's number nine.

I burst out laughing at this, and I'm not sure why. It sounds like a fake name that Homer Simpson would come up with on the spot.

Ah Jesus Owen would you ever pass the ball!? Not content with the simple 'Josh', the extremely religious Mr & Mrs. Owen felt the need to fully commit to Christ with their first born son.

Ah yes, a weatherwoman from a Miami news station will be ready to control the game at out-half if she is called upon from the bench.

The second name of a semi-well-known German goalkeeper with a name that will only be uttered by an Irish person if they have a pal called Fred and are the type of eejit that makes shite nicknames for everyone.

Fair enough, this one is just awesome.

ISS Pro 98 couldn't use the real names, and they absolutely owned it.