Another weekend of football down, another FIFA 20 Team of the Week to contend with.

Although the Premier League has a full set of mid-week fixtures, we need to reflect on the weekend that was to see who's made it into the squad.

The highlight this week is undoubtedly Virgil van Dijk. The big Dutch centre-half may have been pipped in the Ballon D'Or voting by Lionel Messi. At the weekend, van Dijk showed his prowess at the attacking end of the pitch, scoring twice as Liverpool defeated Brighton 2-1 to extend their lead at the top of the Premier League.

Dele Alli's renaissance under Jose Mourinho has been recognised, gaining an upgrade following his performance in Spurs' 3-2 win over Bournemouth. The attacking midfielder produced a man of the match performance, scoring two goals in the process, in Jose Mourinho's first home league match in charge of Spurs.

In Serie A, Ciro Immobile was the pick of the bunch from the weekend's action. The Lazio hitman scored twice in Lazio's 3-0 win at home to Udinese. However, the striker could have had a hat-trick, but chose to give Lazio's second penalty of the day to Luis Alberto, who duly stepped up and scored. 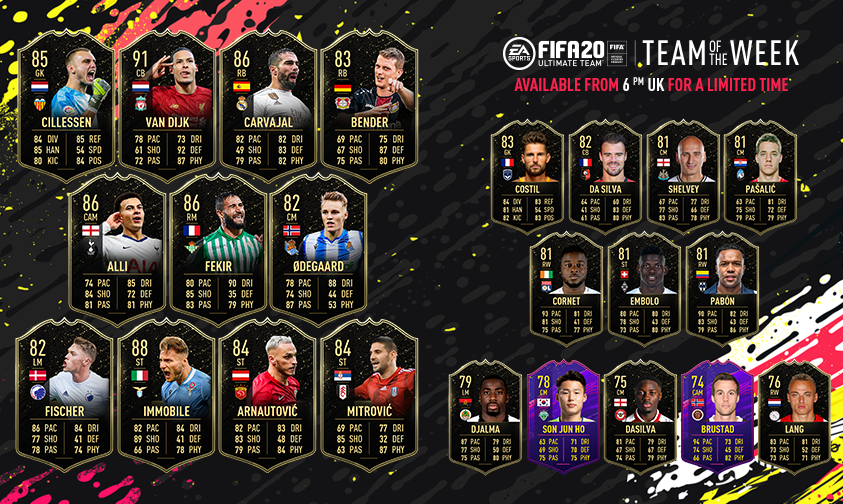 SEE ALSO: We Asked For Your Best Football Manager Stories & They Didn't Disappoint

The Rewind
3 hours ago
By Gary Connaughton
Louis Theroux Has Given His Thoughts On Joe Exotic & 'Tiger King'
GAA
4 hours ago
By PJ Browne
'The Shot Rang Off, One Footballer Looked Up The Road... Aidan Was Dead At That Stage'