The strangely intense Bryson DeChambeau-Brooks Koepka feud flared up against yesterday at the Memorial tournament in Ohio, as DeChambeau had fans ejected from the course for taunting him with pro-Brooks chants.

A number of patrons at the tournament were escorted from the golf course after shouting 'let's go Brooksie' as DeChambeau teed off.

Whoa. Sure seems like someone has, in fact, given the directive to remove anyone from the crowd who yells “Brooksie” in Bryson’s direction.

At least three fans have been removed on the front nine (he started off the back). Security is going into the crowd to have fans removed. pic.twitter.com/eAmLNkEqDC

A spokesperson for the PGA Tour released a statement Friday that DeChambeau had singled them out.

“Bryson had an issue with some spectators and notified security, who dealt with them,” a tour media representative confirmed.

“Oh, they weren’t taunts at all, it was flattering. I think it’s absolutely flattering what they’re doing,” said DeChambeau. “They can keep calling me that all day if they want to, I’ve got no issue with it. Most people think it’s a distraction, but I grew up learning how to deal with that stuff and I honestly thought it was flattering.”

I hear a lot of stuff. I've had people tell me I suck to my face for a long time, so you just kind of zone everything out. But certainly, any bad hole, someone was yelling it and then any good hole people were yelling, 'Go, Bryson' almost louder. It was like a pseudo rivalry and he's [Koepka] not even here.

Koepka - who is not playing the tournament -  is not exactly innocent here. He retweeted content that goaded fans to carry on with the chant. He is also offered his ejected supporters some terrible American lager as compensation via a video on social media.

"Hey guys. It’s Brooksie. Thank you guys for the support. I heard a bunch of you were shouting my name at the golf tournament today,” he said. 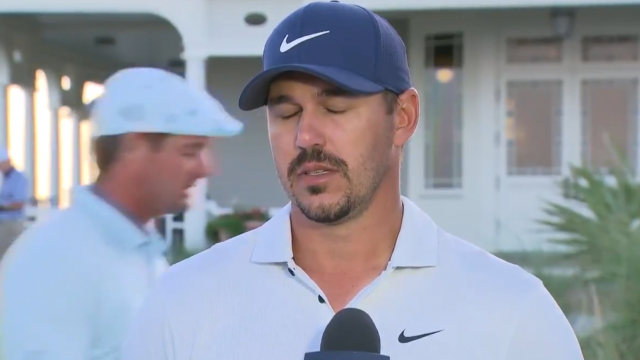