Shane Lowry fired himself into Masters contention on Friday, with a brilliant round putting him into a tie for second place going into the weekend.

Lowry is the frontrunner of the Irish contenders after he shot a stunning 68 in tricky conditions on Friday. He enters the third round tied second on -3, five shots behind leader Scottie Scheffler.

Despite saying that he didn't enjoy playing in those blustery conditions at Augusta, Lowry did suggest that the forecast of more wind over the weekend could play into his hands.

Shane Lowry: Irishman hopeful ahead of Masters third round

Shane Lowry shot one of the standout rounds on day two of the Masters at Augusta, with an amazing 68 propelling him into the chase for the Green Jacket.

Shane Lowry is making moves at The Masters 💪

This incredible chip in on the 10th has him within two shots of the lead 💚 #themasters pic.twitter.com/xIF2Mdjhqi

Speaking at the press conference after his round on Friday, Lowry commented on the tough conditions at the iconic Augusta National.

Strong winds saw many players struggling on Friday, and the wind is expected to hold up over the rest of the weekend. Though he said he had not necessarily had the most fun round of his career on Friday, Lowry is aware that the wind may well play to his strengths.

I didn't enjoy it really much at all. It was so hard out there. Look, it was one of my better rounds of my career, I think. It was quite tricky out there, quite difficult, and I managed to play some good golf and hole some nice putts at the right times.

I'm obviously very happy with my score. I'm in a great position going into the weekend.

It's going to be hard. You're going to need everything to go your way to be standing there getting green on Sunday.

I play well in tough conditions. I much prefer the scoring be like this than 20 under. This is where I think I thrive.

It's supposed to be windy tomorrow and, knowing Augusta, it will probably be easier pins on Sunday. Scoring might get a little better on Sunday, but tomorrow you need to put yourself in a position to give yourself a chance on Sunday.

There's a massive round of golf ahead of Shane Lowry, as he dreams of adding a Masters crown to the Open Championship he won in 2019.

Lowry will tee off in the penultimate group on Saturday evening, with his round getting underway at 7:40pm Irish time alongside Sungjae Im.

The other remaining Irish contenders will tee off earlier in the day. Seamus Power is the first of the Irish to get going on Saturday, teeing off alongside Marc Leishman at 3:40pm. Power sits on +4 in tied 45th. Rory McIlroy enters the weekend in tied 23rd on +2, and will tee off at 5:20pm alongside Sepp Straka.

Padraig Harrington missed out on the cut, finishing his Masters on +5.

Shane Lowry's mega round on Friday, however, has us dreaming of Irish glory. If the blustery conditions hold up over the weekend, who knows where the weekend will take the Offaly man.

SEE ALSO: Tiger Woods Sums Up Just How Much Work Went Into His Masters Return 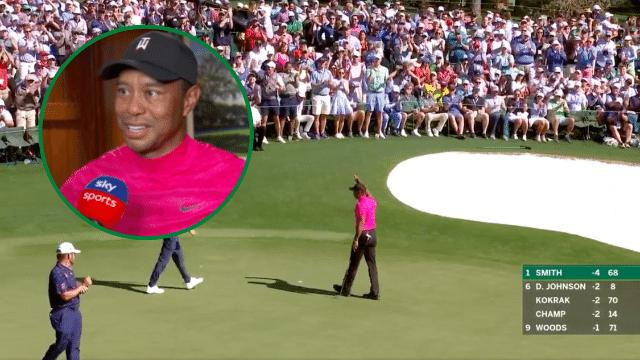