Shane Lowry On Absolute Fire As He Surges Into Masters Contention

There are four Irish golfers at the Masters this week, and we head into the weekend with an Irishman very much in contention for the green jacket. Shane Lowry shot a remarkable round with five birdies today in gusty conditions and is right in the mix.

The course was playing very tough today with the wind gusting. However these are ideal conditions for the Clara man and he played his best ever round at Augusta, finishing with a 68. It was the low round of the day.

He finished tied with Charl Schawrtzel and Sung-jae Im in -3 on second place. Scottie Scheffler leads.

Lowry got off to a poor start with a bogey on the first, but managed to recover with birdies at the par five second and the par four seventh.

Then came the 10th hole, infamous for Rory McIlroy’s spectacular collapse in 2011. If only Rory had had the luck of the Irish that day like Lowry had this evening.

The microphones picked up an audible ‘oh no’ from Lowry after a hooked drive that was heading deep into the trees. However, a lucky bounce left him out on in the rough, albeit out of position.

After laying up roughly 30-40 yards from the hole, Lowry was faced with an extremely difficult up and down to a raised green.

What happened next was less down to luck and more down to superb wedge control from the Clara man.

Sitting on an up slope he hit a high pitch shot in which managed to work its way into a cup which was situated in a tight position.

Shane Lowry is making moves at The Masters 💪

This incredible chip in on the 10th has him within two shots of the lead 💚 #themasters pic.twitter.com/xIF2Mdjhqi

It was a shot that changes rounds and perhaps, although we are probably speaking too soon, career.

It took Lowry to one under and within two shots of the lead.

Although Scheffler managed to reached four under par, Lowry continued to deliver as he birdied the par five 13th, and the par five 15th to leave him a shot off the lead on three under par, while he also has the highest second round score of anyone in the field with four under for the day.

I’m not sure what ‘The Zone’ is, but Shane Lowry is in it!

Beautiful approach to 15th for his fifth birdie of the day.

Hands up if you are one of the 128 players who picked The Irishman for #JKcharity?! pic.twitter.com/jujDFRRUW0

The good news for the Offaly man is that the forecast is for more wind on Saturday.

See Also: Padraig Harrington Nails Monster Putt To Save Par At The Masters 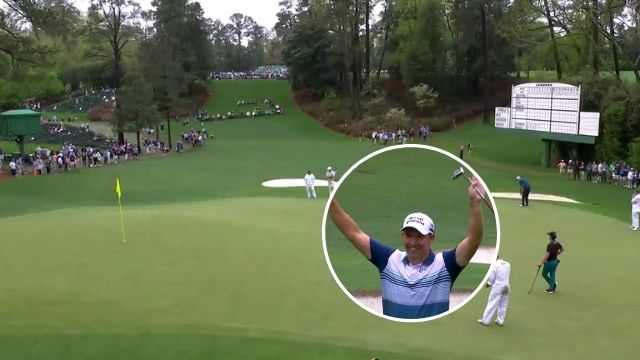