US PGA Tips: Watch Out For The Europeans

The US PGA is upon us once more this week, with the world's best descending on Kiawah Island in South Carolina for the second of the year's four majors.

Rory McIlroy has won this tournament on this course before, in 2012, and his win a fortnight ago at the Wells Fargo Championship, he is comfortably in the mix in what is a stacked field.

With over 20 winners already on this year's PGA Tour, there's no clear cut favourite going into the weekend's golf, making it all the more enticing.

In anticipation of the PGA, we spoke with US Golf reporter Mike Bailey. He gave us his take on some of the leading contenders - as well as all of the Irish in contention. Mike correctly tipped Hideki Matsuyama at the Masters last month, so we were eager to see which tips he had in store for us for the US PGA.

There's plenty of safe and outside bets to mark your card, and we have some of them detailed below. You can watch below, or listen to the podcast here.

The thing I like about Rory - and that I like a lot about the European players in this field is that they're so used to playing links golf. Kiawah's not a true links course, obviously, but it has a lot of links characteristics.

This is a course where you're going to miss a lot of greens. So, if Jordan's hitting the driver pretty good, if he's keeping his play off the tee, I like his chances. He has such great feel and he's so creative around the greens that, you know, you just feel like he can get up and down in the most difficult situations.

I'm told the greens are perfect there this week...I think you can expect everyone to roll the ball pretty well. He can get a lot of hard-earned pars and in a tournament like this those pars are more important than the birdies. Obviously you want to go on birdie runs if you can, but it's not making bogeys and certainly not making doubles or worse that really keeps you in contention on a golf course like this at a major.

They're not making the greens super fast - you can only get them so fast anyway - that favours a player like Spieth. And he has played well enough lately to show signs that he could certainly break through. This would give him the Grand Slam, so there's plenty of motivation. That would be a cool story, and he is one of my picks.

The interesting thing about Dustin Johnson...he hasn't been playing well, but we know how talented he is. We know how long he hits it and long is going to work well on this golf course, if you can control your ball flight - and when he's playing well, he can certainly do that.

He went to coastal Carolina, he's played a ton of golf down there, there's no telling how many times he's played Kiawah. I would say quite a bit, I mean he's from that area, he knows it well. He knows how to play in those conditions, there are other coastal courses down there too.

He probably grew up playing a lot of these types of courses. I know he's pretty jacked to play this, he's pretty excited. So I expect him to give his best effort.

I think another guy we should look at Patrick Reed. The reason is because he is such a consistent ball striker. He flights the ball well in these kinds of conditions. He's a guy who can...you know, he doesn't tend to hit any wild shots.

In some ways, to me, he's almost like a kind of Zach Johnson except with length. I would like Zach Johnson in this as a dark horse if he hit it a little longer, I just think the golf course is a little too long for him.

We know that he [Reed] plays well in majors, we know what he's done. We know he plays well in big tournaments, despite any controversy around him. The guy can play golf and there's not a portion of his game that's really weak, so if he puts it together, he's definitely got a chance!

I think you've got to look at people like Tony Finau as well, he's a very consistent ball striker as well and hits it long. Again, if it's the week that you get hot, a guy like him could certainly contend for this tournament.

Mike Bailey's US PGA Outside Bets:

Another guy we didn't mention who's playing really well this year and is also getting close to 50 and is a very steady, very great ball striker, is Lee Westwood. So, maybe throw him into the mix as well!

If you watched him from tournament to tournament, he looks totally comfortable out there. It seems like he's had four, five, six really good holes in a row and then, you know, he'll get a bogey where he shouldn't have gotten a bogey. Or not convert a birdie opportunity, or hit a par five in a two- or maybe three-putt and be just off the edge and not get it up and down - not that he doesn't have the talent to do that, because he has great hands, as we know.

Great feel, great hands around the greens...I think it's just a matter of these putts dropping for him. As long as he keeps the ball in play there - he very well can and, again, I like the European players here because of the golf course. He's a guy that's excelled in those types of conditions.

I like Henrik Stenson, just purely because of his history. As far as I can tell, he still knows how to hit the ball and this seems like it would be a good set up for him - especially as great of an iron player as he's been over the years. If he catches lightning in a bottle, maybe - it might be worth taking a shot on a guy like that!

The one I love is Padraig Harrington. You know, an Open winner...he kinda revamped his swing in recent years, right?

Would it surprise us? It would surprise us, but it wouldn't be shocking. It would be a great story. 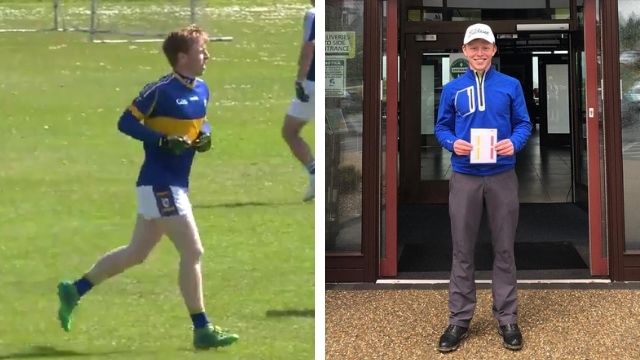 Golf
3 months ago
By Eoin Harrington
US Open Tips: Who Will Survive Torrey Pines?
Popular on Balls
Gaming
49 minutes ago
By Andrew Dempsey
Here Is Ireland's Best Starting XI According To FIFA 22's Player Ratings