With the semifinal of the Heineken Champions Cup kicking off this Saturday, former Ireland back row Stephen Ferris spoke about how he thinks Leinster v Toulouse will play out.

The Top 14 side scraped past Ulster and Munster in their previous rounds of the tournament, but Ferris has described Leinster as "huge favourites" ahead of the game at the Aviva Stadium.

Speaking on The Build-Up in partnership with Ladbrokes, Stephen Ferris said that if Toulouse make the same mistakes as they did in their last outings against Irish opposition, booking a place in the final will be out of reach.

"I think they've got to match Leinster's intensity. If they make the same amount of mistakes against Ulster or against Munster then I think they’re going to get beaten by 10 or 15 points, I really do. "

Toulouse overcame Ulster by a narrow one-point margin in the two legged, last 16 tie before needing penalty kicks to knock Munster out in the quarterfinal.

Ulster looked set to be on course to knock the reigning champions out after a 26-20 win over the French giants in Toulouse, but a late try from Antoine Dupont sealed the win in the dying moments.

Toulouse also had to come behind against Munster in the last round, with Johann Van Graan's team leading 24-14 with just under 15 minutes remaining in the contest.

The no-look pass from Peato Mauvaka. 👀
The step from Matthis Lebel. 🔥

Leinster sealed their place in the semifinal after a 23-14 win over Leicester Tigers at Welford Road. A dominant first half performance which saw Josh Van Der Flier and Robbie Henshaw cross for tries gave Leinster a 20-0 lead at the break.

The Premiership champions did fight back late on with tries from Chris Ashton and Nic Dolly but the deficit proved to big for Leicester to overturn.

Ferris feels Toulouse's luck may be out

"This Leinster side against Leicester, they didn’t play particularly well but it was like they got a few mistakes out of their system and they’ll be ready and raring to go. " 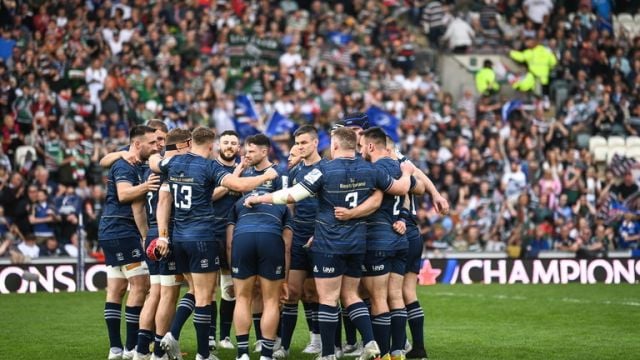