It would be hard to look at the viewership for the dramatic finale to the F1 season on Sunday afternoon and not see some link to the immense popularity of Netflix's series on the sport, Drive to Survive.

As the 2021 season concluded, the effects of DTS on the sport were plain to see, and minds are already looking forward to season four, and the story lines in store for us.

We cast our eye back over what was an unprecedently dramatic season, and picked out some of the story lines that we hope that the Netflix producers find time for in their limited time of just ten episodes.

Drive To Survive Season Four: What we want to see

Okay, there will definitely be time for this one.

In all truth, the title battle between Max Verstappen and Lewis Hamilton could have warranted a season of Drive to Survive on its own merit. Verstappen has already revealed that he refused to be interviewed for the show's fourth season, but the drama of the battle extended far beyond just the two drivers.

If anything, the more bitter side of the rivalry was between team bosses Toto Wolff and Christian Horner. The two sparred in their interviews with the press all season long, with Mercedes boss Wolff calling Horner a "whingebag who likes to be on camera" back in June.

“Christian is a bit of a whingebag”
Toto is not happy 😂😂 #f1 #AzerbaijanGP #RedBull pic.twitter.com/2WAyuvzsUn

The rivalry reached crescendos at Silverstone and at this month's Saudi Arabian and Abu Dhabi Grands Prix. After Verstappen and Hamilton crashed at July's British Grand Prix, Red Bull claimed that the damage costs from the crash were in excess of €1.5million, while the less said about the childish drama over team radio in Saudi and Abu Dhabi, the better.

Wolff and Horner are two of Drive to Survive's biggest stars from its run thus far, and we expect to see even more air time for the pair after a season of sparring.

Another fan favourite of the early seasons of Drive to Survive was Australian Daniel Ricciardo. Season one tracked his departure from Red Bull to Renault and, after a testing 2019, season three found him back on the podium for the first time in two years with the French marque.

He was on the move again for 2021, joining the iconic McLaren team. It wasn't an easy year for the Aussie, as he struggled to adapt to the new car, despite it being one of the strongest on the grid. He fell behind young teammate Lando Norris in the standings and seemed off the pace for much of the season.

That alone will make for fascinating viewing - and we can almost be sure that Netflix's producers will want to see all of that reach the finished product, given how well the Ricciardo content went down in seasons 1-3.

But it was his surprise win at September's Italian Grand Prix that stands out as a "made for Netflix" moment. In a rare reminder this season of just how good Daniel Ricciardo is at his best, he drove an immense race as Hamilton and Verstappen came to blows once more, and claimed a deserved win - his first since 2018, and McLaren's first since 2012.

It's so much fun when @danielricciardo's up there! 😍#ItalianGP 🇮🇹 #F1 pic.twitter.com/jqS8EOP0Ou

The most competitive field in a decade

This was a Formula 1 season like no other, with drama at every race. We're not sure if Netflix can even do justice to just how competitive the field was, but we'd love to see a focus on some of the standout performances from the midfield.

Esteban Ocon's controlled maiden win in a chaotic Hungarian Grand Prix stands out as a potential episode of its own, while there were "nearly-wins" for Lando Norris at the Russian Grand Prix and Charles Leclerc at the British Grand Prix that should make for fantastic and emotional viewing.

13 drivers stood on the podium at some stage this year and even the sole wins for Hamilton and Verstappen's teammates - Valtteri Bottas and Sergio Perez - would warrant an intriguing contrast to the two title contenders.

Regardless, the success of so many on the grid gives Netflix plenty to work with.

The differing fortunes of former champions

There were four former world champions on the grid for 2021, after the return of Fernando Alonso to the sport with Alpine. Lewis Hamilton was obviously otherwise occupied with the new world champion, Max Verstappen, but the other three contenders were scattered throughout the field.

For Sebastian Vettel and the new Aston Martin team, it was ultimately a disappointing year. Vettel recovered well from a horrific 2020, with one and a half podium finishes - his disqualification from second place in Hungary is another storyline we'd like to see.

He was, however, eventually to finish outside the top ten in the championship, with his team in seventh. For a team that finished fourth in the championship last year (as Racing Point) to employ a four-time world champion and go backwards can't really be seen as anything other than a failure, and we'd be fascinated to see how things went behind the scenes at Aston Martin.

Fernando Alonso was happy to take a background role for much of the season, with some standout moments in Silverstone and Qatar balanced by some more routine points finishes and some misfortune.

The sport also bade an emotional farewell to 2007 world champion Kimi Raikkonen - though any F1 fan will know that Netflix will be lucky to get more than a few words out of him.

The rejuvenation of Williams

The period between 2018 and the end of 2020 had been a barren spell for the legendary Williams team, with only seven points earned across three seasons of racing, and none in the 2020 season. For a team that has won nine constructors' championships, it was a dramatic fall from grace - but 2021 saw something of a return to form.

Englishman George Russell - soon to be Lewis Hamilton's teammate at Mercedes - was one of the drivers of the year, and shone in qualifying in Belgium and Russia to take scarcely believable P2 and P3 finishes in each. The rain-curtailed race at Belgium led to the team's first podium in four years, and they ultimately finished eighth in the championship in a huge step forward.

The year was also tinged with sadness, as the team's founder Frank Williams sadly passed away in late November. We're sure that the producers of Drive to Survive will find a respectful way to pay tribute to Frank William's legacy, and tell the emotional story of their return to form in 2021.

In all honesty, it will be hard for Drive to Survive to even begin to live up to the real-world action of 2021 in F1. While we wait for its release in spring 2022, it's worth revisiting all of the race highlights to relive some of the drama.

Whether or not they'll get to all of the storylines above is the big question, but we have a feeling that the new season will be must-watch once more come March.

And, sure, by then it'll only be a few weeks 'til the real thing is back again.

SEE ALSO: Explained: The Dramatic Conclusion To The F1 Season And How It Happened 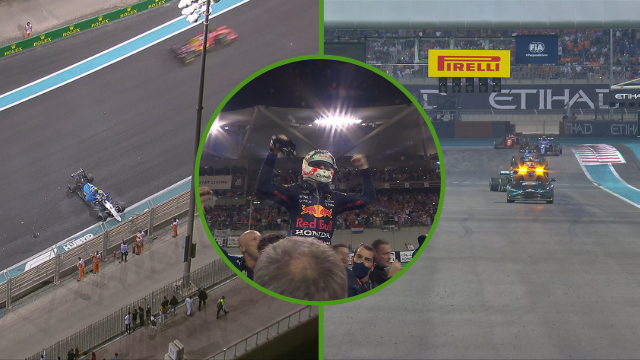 Motorsport
1 month ago
By Eoin Harrington
How 'Drive To Survive' Has Changed Formula One In The USA
Motorsport
2 months ago
By Eoin Harrington
Why Max Verstappen Isn't In The New Season Of 'Drive To Survive'
Motorsport
2 months ago
By Jonathan Browne
Watch: Netflix's Formula 1: Drive To Survive Season 4 Trailer
Popular on Balls
Football
1 day ago
By Luke Delaney
Europa League Final: Five Arrests As Frankfurt Supporters Attack Rangers Fans
GAA
2 days ago
By Luke Delaney
Jackie Tyrell Calls For 'Accountability' For Players Who Feign Injury
46