You have to hand it to the Formula 1 lads. They're good at giving us a glimpse of behind the scenes.

The Christmas themed F1 Grid Does Secret Santa 2021 video dropped on the Formula 1's official Youtube channel and there are some interesting takeaways.

First of all, it's incredibly hard to think that all of the F1 drivers involved put careful planning, thought, purchasing and wrapping into their gifts.

There's no doubt that some of them did, fair play to them, but there was probably a few Personal Assistants scrambling around supermarkets before the deadline.

Nonetheless, we've been gifted a video that shows a very harmonious side to the drivers. Much of the presents were purchased for drivers of different teams.

It's the season for giving 🎁

And there were plenty of laughs and surprises when the F1 grid got involved with their annual Secret Santa gifts! 🎅

The full video can be watched on Youtube here.

First of all, we now know that every F1 driver plays paddle. Pierre Gasly is gifted a paddle racket from Lance Stroll from the get-go, and Esteban Ocon receives one later from Sebastian Vettel.

Despite much anticipation, Nicholas Latifi did not receive a gift from Max Verstappen. But Latifi went above and beyond for Max this Christmas. Sorry, had to.

The innocence of Yuki Tsunoda as he's gifted a handheld gaming device which he says he'll "definitely use for the aeroplane." Only Yuki could say the word aeroplane in full.

Nikita Mazepin surprisingly put a lot of thought into his gift for Mick Schumacher by giving him a pair of Russian boots that he tested himself.

Sebastian Vettel received an odd litter picker present from Max Verstappen. "Thank you Max, and I hope you win the championship," Vettel said after. Interesting.

Daniel Ricciardo is then gifted a bottle of Spanish Rioja wine from Fernando Alonso and even wears a child's tattoo of his face on his arm after.

It seems like Valtteri Bottas was the most excited for the Secret Santa presents despite not showing much emotion. Although Bottas has never really shown much emotion.

Speaking of lack of emotion, Kimi Raikkonen arguably stole the show with his deadpan reaction to receiving what they've called a 'long gin drink.'

"It's out of what ... I don't know," Raikkonen says trying to look interested. "The wrapping is familiar. Pierre. Alright, thank you, Pierre."

George Russell then receives a joke t-shirt of a picture of his abs from fellow countryman Lando Norris. Lewis Hamilton was the only driver not to participate.

The spirit of Christmas is truly alive on the grid this year. 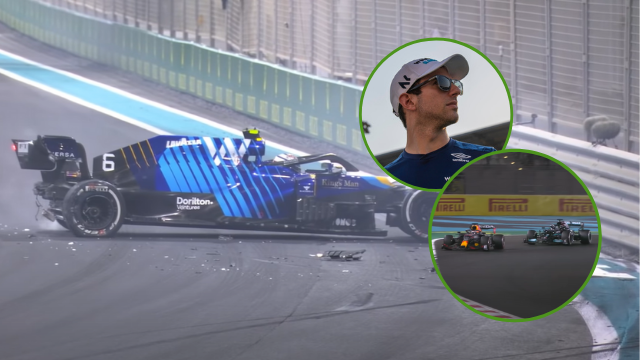