Lewis Hamilton got a nasty shock on Saturday when he was forced to start from last place in the Sao Paulo GP sprint race - but he made an amazing recovery, making 15 overtakes in just 24 laps to finish in a sensational fifth place.

The new F1 sprint race format has proved controversial this year. The format sees traditional qualifying moved back to Friday night, with Saturday evening given to a shorter 30-minute race to decide the grid order for Sunday's Grand Prix.

The format was trialled for a third time for this weekend's Sao Paulo Grand Prix - and it was comfortably the most entertaining trial this year.

There was even more controversy before the sprint race got underway. Lewis Hamilton finished first in qualifying on Friday, but was eventually excluded from the results for a technical infringement around his rear wing - almost 24 hours after the investigation had begun.

His main championship rival Max Verstappen was let off the hook for touching Hamilton's car after qualifying, and was moved up to P1 for the sprint race - with Hamilton forced all the way back to P20. With Hamilton already set to take a five-place grid penalty for tomorrow's main event due to an engine change, a charge through the field was desperately needed to save his title hopes.

That was exactly what Hamilton delivered, as he cut through the field like a hot knife through butter. He was up to 16th by the end of lap one, and was handed another position soon after when Alfa Romeo teammates Kimi Raikkonen and Antonio Giovinazzi clashed.

The Alfa Romeos make contact as the second lap begins 😭

Once he made his way past the bulk of the grid's slower cars, Hamilton's job became trickier as he came up against the likes of world champions Sebastian Vettel and Fernando Alonso, as well as McLaren's Daniel Ricciardo - who has won a race this season.

Hamilton made his way through the crowd with relative ease, and set about chasing down P5 from fellow Brit Lando Norris. The Mercedes driver had to pass Pierre Gasly and Charles Leclerc to do so but, with two laps to go, he was amazingly closing up to the McLaren of Norris.

The last move of the day for Hamilton was the best, as he flew down the inside of Norris at the last second to snatch P5 on the final lap. It was a stunning move that capped a stunning drive, as Hamilton moved up 15 positions from lights out to chequered flag.

It was very much a case of damage limitation for Lewis Hamilton on Saturday in Sao Paulo, but his championship hopes were given a slight boost when his teammate Valtteri Bottas beat Verstappen to the sprint race win. The win for Bottas handed him an extra three points in the championship, and gives Hamilton's title rival Verstappen a tougher job to take maximum points on Sunday.

It is still very much advantage Verstappen in the title fight and, with eight places between him and Hamilton on Sunday's starting grid, it will be immensely tricky for the Briton to make up any of the 21 point deficit in the championship.

Hamilton and his team, though, were in defiant mood after the chequered flag, with team boss Toto Wolff coming on the team radio to say "fuck them all" in a pointed comment, and Hamilton himself refusing to give up hope in his post-race interviews.

In a season defined so much by consistent brilliance from Verstappen, this was a timely reminder of just how good Lewis Hamilton is - and how fun it is to watch him in full flow on a race track. 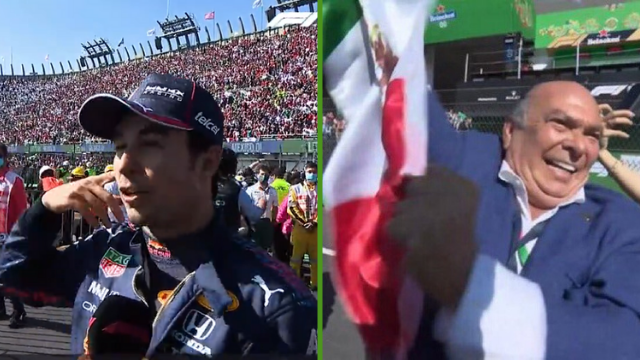