Saturday's Belgian F1 Grand Prix qualifying saw a huge crash for leading contender Lando Norris - and former world champion Sebastian Vettel was among those unhappy with the decision to continue the session in heavy rain.

Norris went off at the high-speed Raidillon corner and smashed into the wall, after race direction chose not to stop the qualifying session.

At the start of Q3, where the top ten drivers race off to set the fastest single lap-time, four-time world champion Sebastian Vettel was one of the first men out on track, and immediately called on race direction to call a halt to the session. Heavy rain continued to fall, with plenty of standing water on the track.

McLaren driver Lando Norris had been one of the fastest drivers throughout practice, Q1 and Q2, and was in contention to take a first pole position when he went spinning off at one of the fastest corners on the calendar and smashed into the wall.

It was a massive crash, and Norris could be heard catching his breath on the team radio in the aftermath. Thankfully, the British driver was not seriously injured, though he may be unable to race on Sunday as he awaits X-ray results on his elbow.

Aston Martin's Sebastian Vettel was the next driver on the scene after the crash, and he made his feelings clear on the team radio, as he slammed race direction for not red-flagging the session.

Vettel annoyed about race directors and checking on Lando pic.twitter.com/rw0DWgy4tY

Yeah, well, what the fuck did I say? What did I say? Red flag! Fuck me, it's unnecessary. Is he okay?

Vettel then went on to slow down beside Norris' stationary car and ensure that the McLaren man was okay, and relayed that information to his team.

The crash was the most recent in a string of nasty accidents at the Eau Rouge-Raidillon corner complex, and the second this weekend. During Friday's W Series sessions, a huge pileup saw several drivers taken to the medical centre after similarly slippy conditions saw multiple cars slide off the track.

The Eau Rouge-Raidillon chicane is among the most famous corners in all of F1, but this weekend's incidents have sharpened the debate about safety at the corner. Just two years ago, French Formula 2 driver Anthoine Hubert tragically lost his life in a crash at the corner, and now drivers are pushing for changes to the circuit to improve safety.

Ferrari driver Carlos Sainz was among those who said as much on Sky Sports' coverage of the race, saying that the F1 directors should look at changing the layout of Eau Rouge to improve the safety of the corner.

Saturday's qualifying ultimately saw championship contender Max Verstappen qualify on pole ahead of surprise frontrunner George Russell. Vettel ended up in P5, while Norris will start from 10th after failing to set a time in Q3. 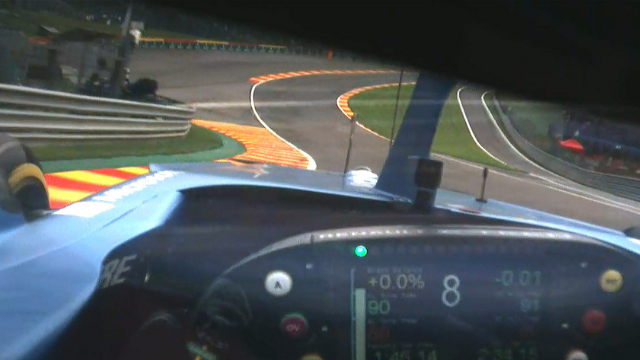