Olympic Medal Hope Happy To Get Out Of 'Toxic' Environment

Here's something you might not know: at the next Olympics, Ireland has a great chance of winning a medal in gymnastics.

Our medal hope for Tokyo is an 18-year-old from Newtownards named Rhys McClenaghan.

Back in April, McClenaghan won Northern Ireland's first ever gymnastics medal at the Commonwealth Games when the claimed gold in the pommel horse.

One of the reasons to be excited about the teenager's prospects is who he pipped to the title: double Olympic gold medalist Max Whitlock.

In adversity, his progression has continued from that success in Australia. McClenaghan won the pommel horse - as you may have guessed it is his specialist event - at the World Cup in Turkey. That's in addition to a World Cup he won last year in Croatia.

"It was a good moment," McClenaghan told Balls at the National Sports Campus.

"I don't think it's been done before in Irish history for gymnastics [winning two World Cups]. That's step forward for the sport.

"That's what I want to strive for in my career and to make this sport grow and grow."

He won in Turkey despite a turbulent build-up. McClenaghan was forced to leave his training base at the Rathgael Gym in Bangor after his coach Luke Carson was made redundant. The two had been based there since 2014.

It wasn't ideal by any means. I didn't actually do a full routine in three weeks in the lead up to that. That's quite difficult because as a gymnast I rely on my programme in the build-up. Normally I'd do hundreds of routines before a competition. I just didn't have that.

Understandably, there was a bit rust going into that competition. Lowering the difficulty level of his routine was the oil he needed.

"It wasn't the cleanest routine but I was able to pull it off clean enough to win that gold medal.

"When I went to that competition, I decided to compete on the day, I wasn't planning on doing it but I decided I should compete. 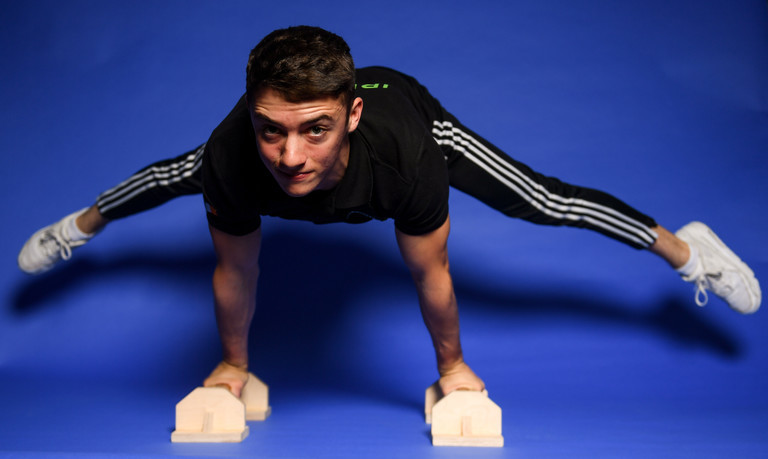 McClenaghan has since moved his base to the National Sports Campus in Dublin. Gymnastics Ireland and Sports Ireland stepped in following the problems in Bangor.

"Sport Ireland and Gymnastics Ireland have been supporting me throughout this whole situation and I'm so grateful for that. They keep to their word.

"I am working with the same coach. Luke Carson, he's come down to Dublin with me. He's doing very well, he's keeping very positive. I think that rubs off on me as well. I'm going into the gym with a very positive attitude."

That team environment in Dublin is one he enjoys - mixing with not just other gymnasts but also elite athletes from other sports. The student in him enjoys picking their brains about training and how they think about their discipline.

He's also away from what he describes as the "toxic" environment of his previous club.

They didn't want me to progress and they weren't supporting me in the way a club should do with an elite athlete. An elite athlete needs every support that they can get.

If people are trying to hold you back, you don't want them in your career. It's a good thing that I'm away from that club.

His start in the sport came via parents who saw a son with bundles of energy but no channel for it. The local club was the ideal place to tire him out.

"I just went there and it was the perfect environment for myself: big soft mats and a foam pit so I couldn't hurt myself. I just loved it from the first day and I still love the sport.

"I was always excited when I was going to the gym and when I came home I was always knackered. I put 100 per cent into it."

The European Gymnastic Championships take place in Glasgow in August. As part of a multi-sport programme which also features athletics, swimming, cycling, triathlon, rowing and diving, the gymnastics will be shown on RTÉ.

McClenaghan has a real air of unshakable confidence. He knows he can go to the European Championships and deliver. After beating Max Whitlock in the Commonwealth Games earlier this year, he said that he had overtaken the Brit.

"It's a fact," says McCleneghan.

"In that competition, I did beat him. Now, that doesn't mean he isn't going to come back - I'm sure he is. As any athlete does, they go back to the drawing board and come back even stronger.

"I'm not relaxing after that gold medal. I'm not thinking, 'Ah I can relax in training'. I know that people like Max are going to come through and come back even stronger. So, I need to push myself even further."

Those championships are the short-term focus but long-term, it's the Olympics and the ambition of realising a dream.

"Now that I'm training for the Olympics and it's in my grasp, it's an exciting time because it's something I've dreamed of as a kid."

Irish gymnast Rhys McClenaghan was speaking at the Sport Ireland National Sports Campus in Abbotstown prior to departure for the Glasgow/Berlin 2018 European Championships which takes place between August 2nd - 12th.