Cheltenham 2020 - Three Tasty Bets To Have A Nibble On

The famous roar that greets the beginning of the Cheltenham Festival is creeping ever closer; the hype is tangible.

So many plots remain to be played out. Which bankers will crumble? Where will the surprise spring from? The only certainty about the four days of magic at Prestbury Park is it hardly offers a recess from start to finish, sure to leave us all slack-jawed as it decides the best of the 2020 class of equine stars.

Before the first flag drops, we've stolen a glance at the race cards and have put together a few tips that could return a rather handsome profit, enough to get you through to Punchestown at least.

As always, remember to bet only what you can afford. Bet sensibly!

After a mightily impressive performance at last year's Festival romping home in the Close Brothers Novices' Handicap Chase, A Plus Tard (2/1) continues to tick a lot of punters' boxes in this year's Ryanair Chase. Henry De Bromhead has an illustrious reputation for chasers and with Rachel Blackmore on board, he will have one of the best jockeys in the business steering the six-year-old around the course. 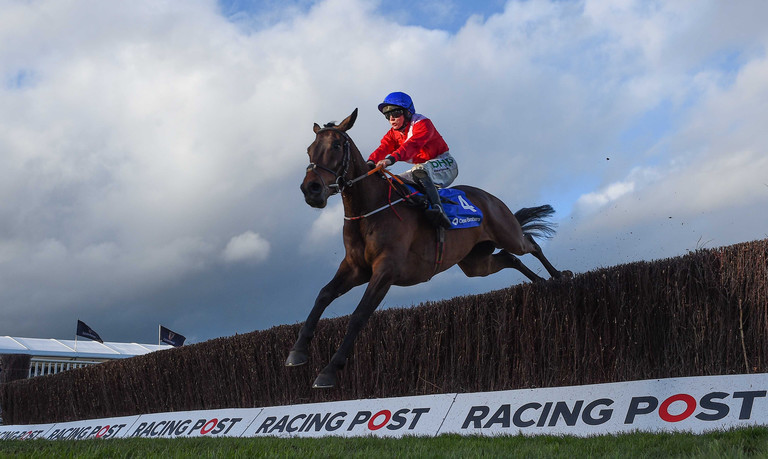 Earlier on this season, he beat Chacun Pour Soi, a major contender in the Queen Mother Champion Chase, over two miles, but he's going to be more comfortable over the longer distance again. Reports from schooling sessions have been very positive with many well-informed sources claiming the favourite to be in similar form to this time last year when he produced one of the performance of the Festival.

Forty minutes before runners go to post in the Ryanair Chase, the Pertemps Final takes place with one fascinating runner near the top of the betting. Winners of the Champion Bumper always demand respect and the same applies to the 2018 winner, Relegate (7/1), who has moved away from Willie Mullins' yard to join Colm Murphy's stables.

Murphy may be somewhat unknown to the casual punter after only reacquiring a training license recently. However, he has previously won both the Champion Hurdle and the Queen Mother Champion Chase at the Festival. Relegate's potential is irrefutable and that Paul Townend is booked to take the ride cannot be ignored.

The Albert Bartlett Novices' Hurdle is renowned as a gruelling contest that has swatted away plenty of young horses with great potential. Stamina is needed and, more importantly, experience is needed as a runner who can bully their way through a congested field often ends up victorious. For those reasons, Ramses De Teillee (12/1) is a fascinating prospect. 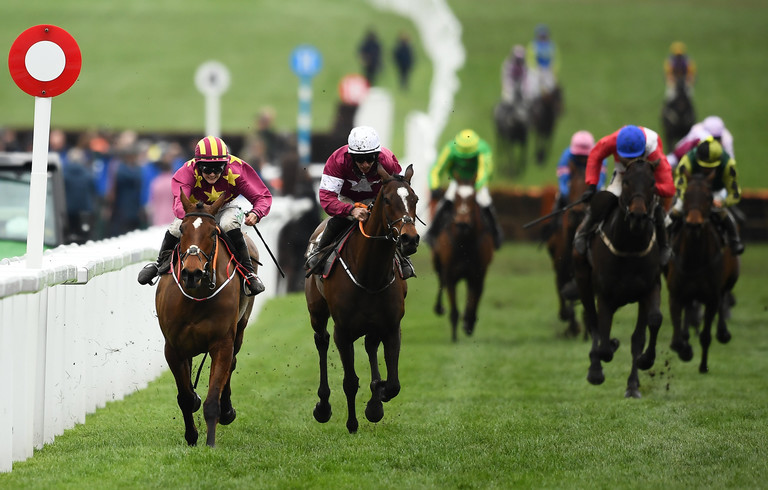 Trainer David Bass has been very shrewd returning the eight-year-old to hurdling where has has retained his novice status. The Englishman may not have the most talented runner in the field but he has built up enough experience to excel in this type of race. Moreover, he has won over course and distance on heavy ground should the ground cut up ever further by Friday.

If Goshen (7/2) was living in Closutton or Seven Barrows there's no doubt that he would be a lot shorter in the market. Yes, there are huge question marks over his jumping but it has never mattered. Once he gets over a hurdle he takes off and there's no catching him. Nearly every one of his races this season has required a split screen to enable viewers to keep up to date on the other runners, the Gary Moore-trained star romping home to 11-, 34- and 23-length wins.

This is a potential superstar in the making and while question marks remain over his jumping, the rest of his game is phenomenal and should be enough to see him up the hill in the Triumph Hurdle in front. It would be a major surprise if the Triumph was the biggest prize on his CV by the end of his career.

Picking the winner of the Gold Cup is challenging enough, no mind taking a swing at first, second and third. As always however, a number of heavy-hitters can be avoided due to question marks over their stamina to get up the hill. Clan Des Obeaux and Kemboy are unproven at this distance, the former yet to prove he is suited to Cheltenham and the latter yet to go beyond three miles. 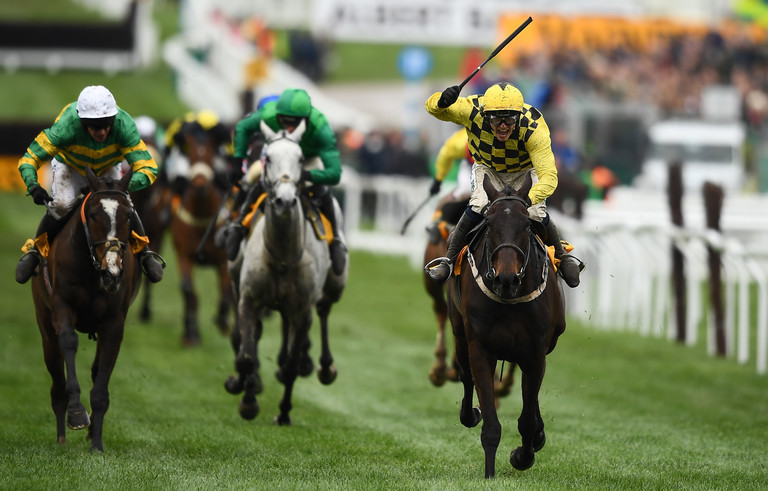 Likewise, Presenting Percy, Santini and Lostintranslation haven't consistently blown opponents out of the water. Delta Work (5/1) and Al Boum Photo (7/2) have been the most impressive of the field this season and must be the ones to beat, Gordon Elliott's runner looking like he may just edge last year's winner going on his last two runs.

The final member of the tricast could be an surprise package, as has been the case over the last number of years with Anibale Fly and Minella Rocco entering the frame. Bristol De Mai (25/1) outran his odds in last year's renewal of the race and may just enter the frame at long odds.

Rachel Blackmore (9/2) has long since been a 'female' jockey, and has actually become one of the most sought after members of the weigh room in recent seasons. She registered her first win at the Cheltenham Festival in 2019, delivering A Plus Tard to a 16-length victory in the Close Brothers Novices' Handicap Chase.

She also rode Minella Indo to a surprise win in the Albert Bartlett, who will likely to take a lot of beating in Wednesday's RSA Novices Chase. All in all, she's going to Cheltenham with the strongest book of rides she's ever had and with De Bromhead bringing the strongest team he's ever brought to the Cotswolds, Blackmore has a glorious opportunity to become the first female to capture the jockeys' title. 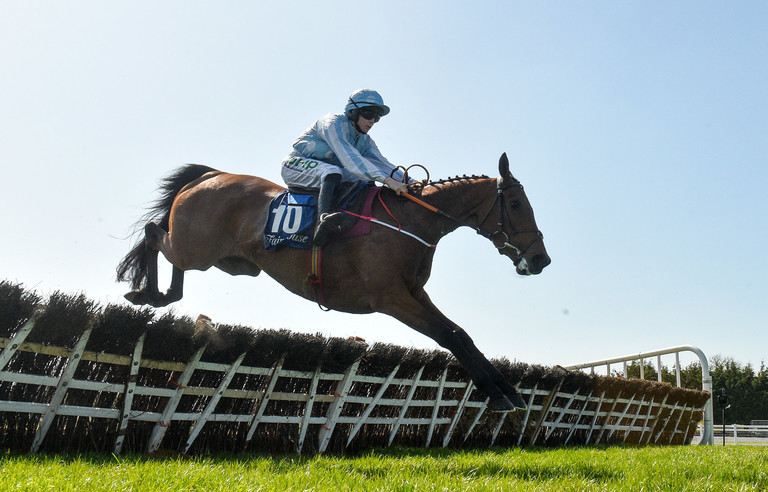 Aboard Honeysuckle (9/4) she will provide Benie Des Dieux with her sternest opposition in the Mares' Hurdle on the first day. Had De Bromhead aimed his yard's star mare at the Champion Hurdle she would have been vying for favouritism but he has opted instead to leave her in the mares' race against the Willie Mullins star, the banker of the week for many. But anything can happen at Cheltenham, as Benie Des Dieux proved last year at Cheltenham when falling at the last.

And Honeysuckle is an Irish Champion Hurdle winner, though her performance in the Hatton's Grace proved this is probably her ideal trip. The Willie Mullins runner won't get it all her own way and the unbeaten Honeysuckle could just get her head in front at the back of the final jump. From there, anything can happen.

*All odds accurate at time of writing

Horse Racing
6 months ago
By Gary Connaughton
Watch: Rachael Blackmore Pulls Off Miraculous Recovery To Win At Cheltenham
Horse Racing
1 year ago
By Sean Meehan
Watch: Tiger Rolls Back The Years To Win The Glenfarclas At Cheltenham
Horse Racing
1 year ago
By Sean Meehan
Watch: Brilliant Post-Race Interviews As 33/1 Shot Wins The Coral Cup
Popular on Balls
Football
5 hours ago
By Eoin Harrington
Juan Mata Questions Manchester United Management After Dire Season
Golf
2 days ago
By Gary Connaughton
Padraig Harrington Glad He Didn't Have To 'Make A Decision' On Saudi Golf League
Football
1 day ago
By Gary Connaughton
The Frank Lampard Love-In After Everton's Survival Was Downright Bizarre
GAA
2 days ago
By PJ Browne
'It Came At An Awkward Time. I Didn't Think It Would Be So Bad'