12 Of The Most Cringeworthy Moments In Sporting History

Eamon Dunphy apologises to the nation

During the 2014 World Cup, RTE returned from a break, possibly without informing the panel (Didi Hamann subtely putting away his phone is a hugely underrated moment). Naturally, without any knowledge of the red light, Eamon Dunphy was letting loose and dropped in a couple of f-bombs before Bill O'Herlihy restored order.

A few minutes later, we were back from another break, and this time Eamon was ready, with an apology direct to camera there was surely no need for. Wonderfully cringe.

As usual, Aprés Match made it all okay.

Peter Odemwingie reassuring the scrum that his move to QPR is just a couple of dotted i's and crossed t's away. A career as a football agent surely beckons.

Seanie Johnston's ninety seconds on the pitch for the Coill Dubh hurlers hasn't been forgotten by anyone who was there. You'd have to admire his eagerness, showing for the ball, making darting runs.

His ability to still look earnest and determined while all about him people were trying their utmost not to break their hole laughing was a sight to behold.

If Coill Dubh need a corner forward, they could do worse than parking their car outside the Cavan Gaels clubhouse Peter Odemwingie style and making it happen.

Gary Lineker going to the toilet in Cagliari

The video below is entitled 'Gary Lineker has a shit in the middle of the pitch 1990' - a title which captures well what is going on in the video.

Steve Ovett and the early celebration

We now enter the arrogance section of the list. The next few entries show us that hubris doesn't always win in the end.

Ovett versus Tracey remains the gold standard in celebrating too early. Steve Ovett was determined to put his hands up in triumph before the race was over. He didn’t even let an early scare stop him.

John Tracey, for his part, appeared to be enraged by Ovett's defiant casualness, and proceeded to sprint the final 100 metres like he was trying to evade a gunman. One of the sweetest of Irish victories.

Danny Trevathan and his ilk

There is a rich tradition in American football of celebrating a touchdown offensively early only to drop the ball crossing the line. American footballers have never been the most self-effacing people. Not for them, the stubbornly low-key Alan Shearer means of celebrating a score. Each touchdown has to be merely the prelude to some ludicrously showy and intricate post-score dance.

(This is a ridiculously regular occurence in the NFL. Seattle's DK Metcalf had a similar situation just last week, but we particularly enjoyed the needlessness of Trevathan's blunder.)

Celebrating before touching down for a try is universally discouraged by approximately all coaches and teammates in world rugby, but some players still can’t help themselves. Most get away with it unfortunately.

However, many also ensured lifelong YouTube infamy when their bad choices are punished in the cruelist of fashions. We have gone for Bath's Freddie Burns here because the circumstances of the game made it the mistake all the bigger.

Burns thought he had scored the game winning try in the Champions Cup game, blew a kiss to the crowd, and let Maxime Medard into the knock the ball out of his hand before he touched down. Tut Tut.

Things didn't go too well when Channel 4 got the rights to the World Athletics Championships in Daegu in 2011, or for their presenter Ortis Deley. A mixup at the end of the broadcast (that was more than likely not his fault!) led to the most cringeworthy outro to a live broadcast of all time.

The tale of Tom Healy and the Tullamore Huddle

Goalies are a race apart. So, it's important they signal with little moments that accentuate their difference. Tom Healy was nonchalant about missing the start of the huddle. So, nonchalant, he ended up missing all of the huddle Healy darted off, confident that nothing too important was said in the huddle.

Paula Radcliffe very soft on Alberto Salazar here. Defends athletes who went to work at NOP. Says Salazar was "found guilty of overstepping that line" as he looked to "find out where the limits lie". Also questions how much money was spent on the investigation by USADA. pic.twitter.com/9gCBFCbsOJ

The undoubted star of Season 2 of Sunderland 'Til I Die was Charlie Methven. His stadium tannoy conversation is probably just about the cringiest pick, but it had a lot of competition.

SEE ALSO: The Best Moments Of Charlie Methven, The Unrivalled Star Of Sunderland 'Til I Die 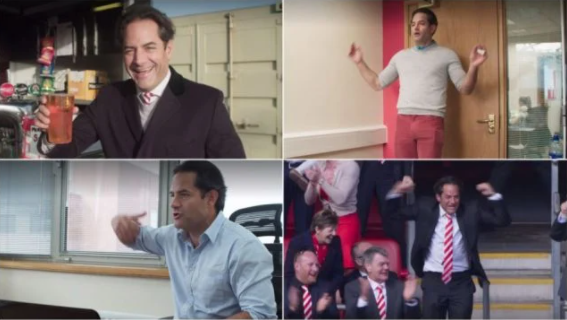 Snooker
6 days ago
By Gary Connaughton
Ronnie O'Sullivan Couldn't Get Over Stunning Mark Williams Escape Shot
The Rewind
1 week ago
By Balls Team
Quiz: Can You Get 100% In This Ultimate Test Of Sports Films?
Previous Next

Motorsport
1 day ago
By Eoin Harrington
Sam Bird Sums Up Why Irish Viewers Need To Tune In For New Season Of Formula E
Snooker
6 days ago
By Gary Connaughton
Ronnie O'Sullivan Couldn't Get Over Stunning Mark Williams Escape Shot
The Rewind
1 week ago
By Balls Team
Quiz: Can You Get 100% In This Ultimate Test Of Sports Films?
Popular on Balls
Football
1 day ago
By John Dodge
These Are The Irish Footballers Who've Received Ballon D'Or Votes
Rugby
9 hours ago
By Colman Stanley
Jimmy O'Brien Announced His Arrival On The Biggest Stage This Afternoon
The Rewind
13 hours ago
By Gary Connaughton
Quiz: From Which Irish County Did This Company/Product Originate?
Football
16 hours ago
By Gary Connaughton
Carragher Reveals Unhappy Instagram Message From Lionel Messi After MNF Comments