Ireland's fairytale PDC World Darts Championship continued today, as Fermanagh's Brendan Dolan advanced to the third round after a 3-1 victory over Edward Foulkes.

Dolan admitted he was not familiar with his Japanese opponent, only getting a chance to see him during his first round win.

Speaking to Sky Sports after the match, he admitted he didn't know a whole lot about his qualifier opponents prior to this afternoon. He also admitted that he was still adapting to a new throwing style he had adopted in recent months.

Brendan Dolan sees off Edward Foulkes 3-1 to reach the Third Round!

A good win for the Northern Irishman to set up a clash with Gerwyn Price pic.twitter.com/RS2Uz863YE

I knew nothing about him, bar that I had watched the first round and saw how well he had played. His finishing was brilliant against Mike De Decker. His scoring wasn't bad either but I knew that if he'd felt a wee bit comfortable he could be an awesome player.

I'm trying to find a throw that I probably do when I'm practicing and not thinking. I know when I get up on stage I'm a bit more methodical. Especially with my first dart.

I probably think that when I do set myself a place that my shoulder drops and the longer I leave it, the longer it drops. It hits the first darts just below the treble twenty.

Before I get up on stage, I'm smashing in 180's and I don't do it on stage. I never have. So with the help of my step son Antoin, Daryl Gurney, they've said about my timing of my first throw. I honestly believe that I'm still working on it. I haven't got right but I'm working on it...

I haven't got it right yet, but I know it's improved my game over the last three months.

Dolan is one of the games real characters, known as the history maker, following a nine-dart finish at the 2011 World Grand Prix and he sported a festive style shirt for this occasion!

A good win for the 47-year-old pic.twitter.com/kS0F2w5La5

He now faces third seed Gerwyn Price in the third round, which will be played after Christmas.

SEE ALSO: Meet The Four Irishmen Who Are Still In Contention At Ally Pally 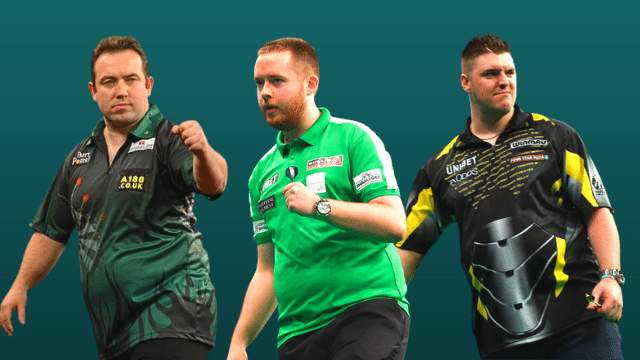 Other Sports
1 year ago
By Conor McKenna
Meet The Four Irishmen Who Are Still In Contention At Ally Pally
Other Sports
3 years ago
By Gary Connaughton
Watch: Fermanagh's Brendan Dolan Advances To Last 16 Of World Championship
Other Sports
3 years ago
By PJ Browne
Fermanagh Man Rips It Up To Make Third Round At The Darts
Popular on Balls
Football
1 day ago
By Eoin Harrington
'Ronaldo Is A Cod' - Remembering Eamon Dunphy's Infamous 2008 Rant
GAA
17 hours ago
By PJ Browne
The Draw Has Been Made For Tailteann Cup Opening Rounds
GAA
1 day ago
By PJ Browne
Donal Óg Cusack Defends Dublin Hurlers After John Mullane Criticism
The Rewind
2 days ago
By Eoin Harrington
Watch: Brilliant Dermot Morgan Dublin Segment From 'The Travel Show' Resurfaces