Other Sports
Jan 3, 2021
By Gary Connaughton

Gary Anderson and Gerwyn Price will face off tonight in the PDC World Championship final, a meeting of two players who have plenty of history.

Anderson will be hoping to win a first world title since 2016, overcoming his recent injury and form issues to unexpectedly reach the decider. Price will be playing on this stage for the first time, although he was one of the pre-tournament favourites.

The two have met on the big stage a number of times before, but their 2018 Grand Slam of Darts final is the standout.

It was a match that the Welshman would emerge victorious from, although his antics on the day would end up costing him a pretty penny further down the lune,

Price was handed a suspended three-month ban and fined a total of £21,500 for his antics in the final, as well as his behaviour in the quarter-final against Simon Whitlock and subsequent social media posts.

While his quarter final antics against Simon Whitlock were unacceptable, it was his behaviour during his final victory over Anderson that drew the most attention. Price repeatedly goaded his opponent throughout the match, while also appearing to push him at one stage. He also attempted to distract the Scotsman during one of his visits.

😯 @GezzyPrice has been handed a punishment from the Darts Regulation Authority for THIS behaviour at the Grand Slam of Darts... 😯

Anderson was visibly angry with his opponent by the end of the match, and it is not difficult to see why. This type of behaviour is rare in the sport, where opponents are usually very respectful during their games.

Price has developed a negative reputation amongst darts fans and player over the past couple of years, and is now one of the least liked players in the game despite his obvious talents. He is regularly booed by the crowd, which only seems to encourage his shithousery further.

Price was unrepentant about his actions in the direct aftermath of his final victory:

He can't handle playing me. He just moans every time that I'm doing this, doing that. Concentrate on your own game.

I'm throwing my darts. He needs to wait for his turn, hold back. He doesn't like it with a little bit up him.

We're sure Anderson will be using this meeting as motivation later tonight.

SEE ALSO: Gary Anderson Thanks Opponents For 'Riling Him Up' After Return To Form 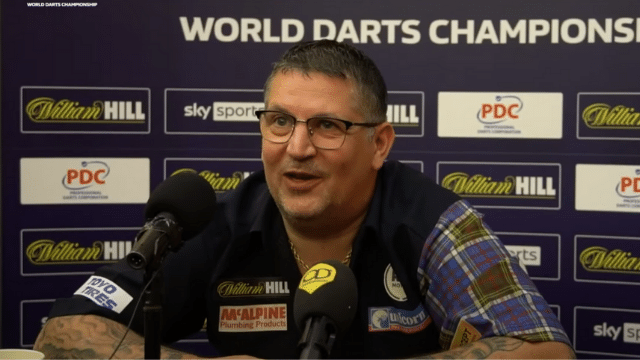 Balls.ie · The Buildup - The Sack For Mick And Liverpool Crisis Or Blip, With Kevin Doyle

Other Sports
1 week ago
By Gary Connaughton
Quiz: Name Every Winner Of The PDC World Championship
1