'I Got A Bike On The Friday, Fell Off It On The Saturday, Raced On The Sunday'

Envy comes easy when you look at Russell White's life.

The 26-year-old from Banbridge spends six months of the year hopping the continents. "I started the year in Abu Dhabi," says White, "Australia, back to America, Bermuda."

White is Ireland's top triathlete, competing in the World Triathlon Series from March to September. He's well travelled but it doesn't come without effort. Airmiles are earned through miles pounded on the road, miles cycled on the road and lengths of the pool.

It's a tough sport - an expensive one too - but also one which allows a lifestyle he enjoys.

"I'm 26, travelling the world and doing a sport I love. You can't really complain."

He was just 18 when he entered his first triathlon. A competitive swimmer wondering if he was going anywhere in the sport, he took part a Newtownabbey triathlon. He won the junior section, finishing ninth overall. "I got a bike on the Friday, fell off it on the Saturday, raced on the Sunday."

Initial success led him to believe he might have a future in the multi-discipline event. He was not the only one either. After taking part in a Triathlon Ireland talent identification day, he was picked up by the association. "It's been a whirlwind since 2010," says the affable White.

Joining a local cycling club helped advance the novice cyclist. He'd ridden a BMX and mountain bike but the road bike was a different animal. Taken under their wing, he was shown the skills which would keep him competitive.

25 to 30 hours a week are spent training, usually with a group in Arizona or Spain - good roads and good weather make the grind easier. Those hours are normally spread across three sessions per day. His week also includes two gym sessions.

Running is currently his weakest discipline but one which is improving.

The swimming always needs to be topped up and kept at quite a high level. Even the feel for the water can drop off if you don't keep on top of it. Thankfully it does come that bit more naturally to me.

Cycling, I'm happy that it's come quite quick.

Running, with not having done a lot of mileage as a kid, it has been a bit slower. It would be what I'm working on the most, even technique-wise. The speed that the guys are running at the highest level in the world is phenomenal. The run speeds are so impressive.

Going full-time and not having a university degree to worry about (he studied primary education in Scotland) benefited his performances; there was a lot more time for rest and recovery. 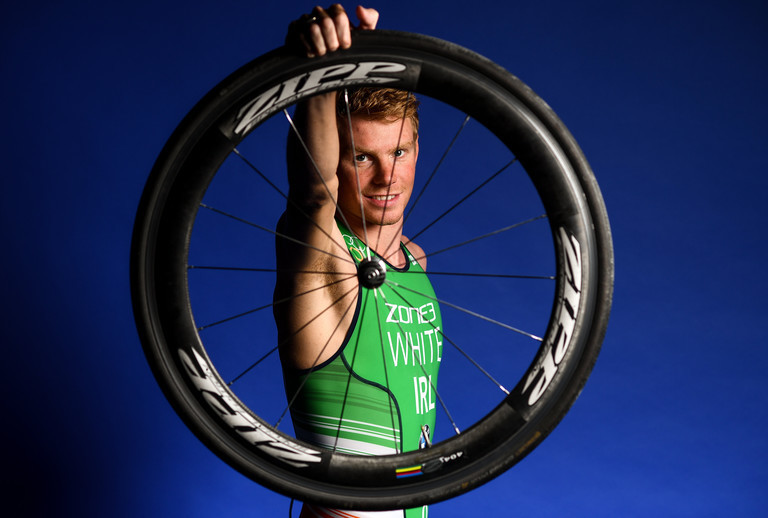 Financial support from Sport Ireland and Triathlon Ireland along with prize money won on the circuit is how he funds his career. He also has a few sponsors - not monetary ones but brands which provide equipment; a real help considering the costs.

"It's such an expensive sport.

"Even when we're training in Ireland, you need a winter bike because the salt on the roads in the bad weather will ruin them.

"Race bike, you're talking a minimum ten grand for a full bike set-up. Race wheels, everything. Parts and maintenance for the season, that cost just goes up.

"Then, you go through multiple run trainers and different trainers for different sessions."

Number 62 in the world is White's current ranking - he's just off the back of finishing 26th in Edmonton last weekend. Next around the corner is the European Championships. It will be a return to Glasgow, he spent six years studying in nearby Stirling.

Usually, White's events are consigned to internet streams and maybe the BBC red button. This month's championships - White competes on August 10th - will be shown on RTÉ.

Qualification points for the 2020 Olympics in Tokyo will be on the line. The process started three months ago in Yokohama and will run until May 2020. White needs to be in the top 55 to secure a place in Japan.

"I want a top ten finish in Glasgow, pushing towards top five. With it being a championships, you always want to be on the podium.

"This season has been a bit slow. The winter was good - I got into great shape before Commonwealth Games but since then I've been sick and trying to find my form since mid-season.

"I know, realistically, a podium finish would be a bit of an ask but if I was top ten, top five, I would be pleased with that performance."

See Also: Olympic Medal Hope Happy To Get Out Of 'Toxic' Environment

Other Sports
2 days ago
By Balls Team
12 Of The Most Cringeworthy Moments In Sporting History
Snooker
3 days ago
By Michael McCarthy
Was This Alex Higgins Clearance The Greatest Break Of All Time?
Motorsport
1 month ago
By Eoin Harrington
Balls Remembers: Jordan's Last Ever F1 Race Win
Previous Next