Ireland is having a wonderful Special Olympics in Los Angeles this year, with a massive 22 medals being won by Irish athletes after just four days so far. We've seen some magnificent photos of joy so far from some of the Irish athletes, but it was 14-year-old Dearbhail Savage produced one of the moments of the Special Olympics so far. 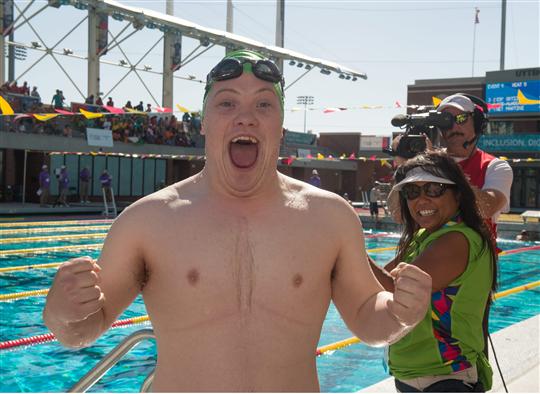 The teenager from Claddy in Co. Armagh was competing in the equestrian event in L.A. this morning. She was happy and confident after her ride, but while the results of the competition were being processed, Dearbhail appeared on the Ian Dempsey Breakfast Show on Today FM.

Another big day at the Special Olympics World Summer Games in Los Angeles, with #TeamIreland securing 7 more medals, bringing the tally to 22. This video from media volunteer Niamh Withers perfectly sums up the emotion & excitement for our athletes, families & volunteers at World Games - see the moment Ulster's Déarbháil Savage from Armagh found out she had won a Gold medal earlier today, whilst speaking to Ian Dempsey Breakfast Show. #LA2015 Special Olympics Ireland

We're lucky that the results were coming as Savage was being interviewed, and the reaction to her winning gold will warm your heart on this cold Irish morning.

Big congratulations to Dearbhail and all of the athletes at the games from us.

Other Sports
1 year ago
By Maurice Brosnan
Quiz: Match The Sports Star With The Memorable Quote
1

Other Sports
4 years ago
By Gary Reilly
Watch: We Guarantee You Won't See A Better Irish Hockey Goal Today
Previous Next

Other Sports
7 months ago
By Aonghus Ó Maicín
The Hidden Stars Who've Quietly Driven Irish Sport
Other Sports
1 year ago
By Maurice Brosnan
Quiz: Match The Sports Star With The Memorable Quote
Other Sports
4 years ago
By Gary Reilly
Watch: We Guarantee You Won't See A Better Irish Hockey Goal Today
Popular on Balls
Football
18 hours ago
By Gary Connaughton
How A 'Lamped' Damien Duff Ended Up Doing A Set In Japanese Comedy Club
3