Brian Carney really is a master of all trades, from switching codes midway through his rugby career to becoming one of the best sports presenters on our screens. Now the former Munster player may want to add Geography teacher and diplomat to his already impressive CV.

Carney was appearing on Sky Sports News to talk about the return of Great Britain and Ireland rugby league team to the international stage for the first time since 2007.

As Sky Sports News presenter Rob Wotton was introducing the former rugby league star, he announced the return of the Great Britain rugby league team. Carney took exception to Wotton's exclusion of Ireland and proceeded to give the presenter a geography lesson in the sovereignty of Ireland.

You can take a look at Carney's remarks here:

The Tans are at it again. pic.twitter.com/39dh0guRpr

Fair play to Carney for pointing out the error in Rob Wotton's introduction and for also calling out the exclusion of Ireland from any official statement related to return of the rugby league team to the international stage.

The only statement that did mention Ireland's inclusion in the tour was from the chairman of Rugby League Ireland, Barry Coade, who said:

We are delighted that Great Britain & Ireland will tour again this Autumn. The tour looks like a real challenge given the rise of the Pacific nations and we think this is a big step forward for international Rugby League.

Our favourite part of this entire "diplomatic incident" has to be Carney's realisation that the presenter has decided to leave out the Ireland part of the team's name. 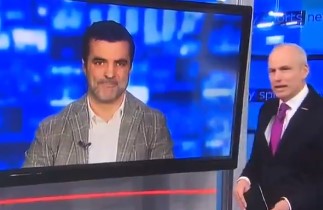 The Great Britain and Ireland team will take part in a four test tour of New Zealand and Papua New Guinea in October and November of this year.

Golf
43 minutes ago
By Jonathan Byrne
Golf Hall Of Famer Sorenstam To Return To LPGA After 13 Years
Aussie Rules
23 hours ago
By Eoin Harrington
Where To Watch The Women's AFL In Ireland
Golf
1 day ago
By Balls Team
Tiger Woods Rushed To Hospital After Single Vehicle Crash In LA
Popular on Balls
GAA
19 hours ago
By PJ Browne
'I Have Pictures Of Stephen Cluxton All Around My House, It’s A Bit Weird!'
Rugby
21 hours ago
By Balls Team
Son Of Offaly Hurling Legend Set For Super Rugby Debut
The Rewind
18 hours ago
By Sean Meehan
Introducing The Vote For Ireland's Greatest Singalong Song
Rugby
16 hours ago
By Eoin Harrington
Rob Kearney Player Mic Gives Great Insight On Western Force Debut