Argentina and Japan were truly put to the sword, while a third ever victory over the All Blacks was unique in that Ireland's nine point margin of victory came nowhere close to reflecting the team's dominance.

There are provisos, of course. Teams generally come to Dublin in November in a state of physical and mental exhaustion, but this year was even an extreme of that. A ridiculous schedule of rugby for Southern Hemisphere team in 2021 meant the Autumn Internationals were always likely to be a bridge too far, and the results this month would suggest this was indeed the case.

While we've seen Springbok and Wallaby teams visit Lansdowne Road in transition in the past, it might be the first time that New Zealand have been in true disarray. Their defeat to France on Saturday might not have been as comprehensive as their Dublin display but shows they are certainly not operating at their usual levels.

And yet there isn't much Ireland could do about any of these things. For the first time in the Andy Farrell era, there's a genuine excitement that the team are playing at a world class level again.

Ultimately though, this month will mean nothing in the long run. The players talked about this month as a stepping stone rather than a destination, and it has to be so. We've had good Novembers before. The usual mid-World Cup cycle accusations will be thrown out by the cynics, and Ireland have certainly never converted a good November into a good World Cup.

But what of the immediate follow on? We've been looking back on some of Ireland's best autumns in the modern era to see if it might hold any indication for the upcoming Six Nations.

While not as comprehensive as the 2021 November Series, Ireland's 2002 was seen as a real catapult towards the 2003 World Cup. The win in the rain over Australia was the first win over a "Big 3" southern hemisphere team in the professional era.

Australia were world champions, and the win a fortnight later against Argentina was equally as important. Both teams would await Ireland in an insanely tough World Cup group less than a year later. Both teams had beaten Ireland in the disastrous 1999 World Cup.

How Ireland Fared In The 2003 Six Nations

The Six Nations carried on where the autumn finished on this occasion. Ireland won comprehensively in Edinburgh, had a rare win over France in Dublin, and required a last second Ronan O'Gara drop goal to win in Cardiff. It all led to a Grand Slam showdown in Lansdowne with Martin Johnson's England the opponents. England exorcised the ghosts of three blown Grand Slams in a row and hammered Ireland on their way to their World Cup win. It was progress for Ireland, but when it really counted, they were still somewhat short of the top level.

Ireland's first win over South Africa since 1965, and only their second in history was the headline of the 2004 November Internationals. The game at Lansdowne in best remembered for Ronan O'Gara's opportunistic/controversial early try, giving Ireland a lead they wouldn't give up.

How Ireland Fared In The 2005 Six Nations

A promising start of three wins out of three before the season came a cropper. Ireland's second successive win over England in Lansdowne Road was a highlight but a defeat to France in Dublin was followed by defeat in Cardiff and a surprise Grand Slam for Wales.

Beating two top tier nations in back to back weeks was a new departure for Ireland. Sandwiched between successive Triple Crowns, this perfect November might have been the ultimate in peaking too early, a year before the 2007 World Cup.

How Ireland Fared In The 2007 Six Nations

The Grand Slam that should have been. Eddie O'Sullivan managed three Triple Crowns in four years as Ireland coach, but his Grand Slam year should have been 2007. Vincent Clerc's late try in Croke Park was the real killer of the campaign, even though the historic visit of England to the same venue, and their subsequent hammering, is what will live on in the memory.

In the end the Championship was lost by a dodgy TMO in Paris (and a toothless Scotland), meaning Ireland lost out of point difference on St. Patrick's Day.

2009 was a November best remembered for Ireland going unbeaten and therefore completely an undefeated calendar year to back up the Grand Slam. The win over South Africa, Ireland's third in a row, was most notable for Johnny Sexton's selection and the birth of ROG Cam.

How Ireland Fared In The 2010 Six Nations:

It was another second place finish for Ireland, but in truth, they finished well behind Grand Slam winners France. A 33-10 defeat in Paris meant the Championship always looked out of reach but a win in Twickenham at least meant a second successive Triple Crown was on. Unfortunately, Ireland blew it in Croke Park's last rugby game, losing to Dan Parks and Scotland, and the Kidney era had started to unravel.

Joe Schmidt has been unlucky in his first November in charge of Ireland, losing to the last second Crotty try in the corner against the All-Blacks. A year later, with a Six Nations Championship in the bag, his side were at full tilt when South Africa and Australia came to Dublin.

Michael Chieka has Australia flying a year out from the World Cup before coming up against another former Leinster coach. 20-20 at half time, the second half was a completely different affair, with just three goals kicked.  Johnny Sexton hit the winning penalty after 63 minutes, meaning almost 20 minutes of scoreless tension would follow.

How Ireland Fared In The 2015 Six Nations

Back to back Six Nations titles aren't exactly what Ireland are used to, but a 30 point win in Murrayfield on the last round of games was enough for a points difference win on a dramatic Super Saturday. There was a three way tie at the top of the table. England would go on to push Ireland close with an insane 55-35 win over France in Twickenham, but Ireland deservedly claimed another title. Defeat in Cardiff robbed Schmidt of his Grand Slam.

A defeat is included here for the first time, given the historic nature of the first game. In Chicago of all places, Ireland ended a century long wait for a win over New Zealand and did it in style. The fixtures a couple of weeks later in Dublin was brutal. It may have ended in defeat but much of the performance paved the way for the 2018 triumph. A win over Australia was key in keeping momentum alive heading into the rest of the season.

How Ireland Fared In The 2017 Six Nations

Caught on the hop in the opening game in Murrayfield ruined Ireland's championship. They fought back well, but were well beaten in Cardiff yet again. A win over England in the Aviva to cost them a Grand Slam was a fine way to finish, but Ireland had underperformed.

An embarrassing South African performance undermined this series for Ireland, who nearly threw it away with a shaky win over Fiji the following week. It's a series of games that is only memorable for its part of the incredible 2017-18 season for Irish rugby.

How Ireland Fared In The 2018 Six Nations

From Johnny Sexton's Le Drop in Paris, Ireland got better and better throughout the Six Nations in 2018, eventually going to Twickenham and winning with relative ease to secure just the second Grand Slam of the professional era.

A first ever home win against New Zealand, an achievement that arguably ranks higher than Soldier Field, was the culmination of the perfect year's rugby for Ireland and Joe Schmidt. A Grand Slam, a test series win in Australia, and finally, another perfect November, with the All Blacks falling in the Aviva Stadium for the first time.

How Ireland Fared In The 2019 Six Nations

If 2018 was perfect, then 2019 was the Annus Horribilis. Well beaten by England in the first game in Dublin, and that felt like it. Ireland never found their rhythm for the rest of the year and Joe Schmidt was left with 2018 as his legacy, and not a World Cup year.

Analysis: Four Reasons Ireland Look Like One Of The Best Sides In World Rugby Right Now 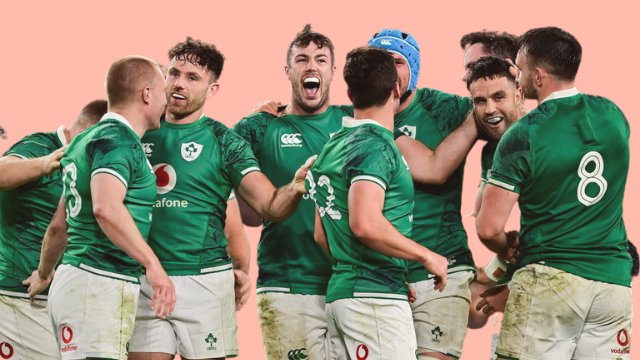