The 10 Greatest Moments From The Aviva Stadium's First 10 Years

Incredibly, the Aviva Stadium is 10 years old this week. Officially opened by Taoiseach Brian Cowen on the 14th May 2010, the new stadium didn't host a game until 31st July when the O2 Challenge rugby game was played, followed a few days later by the visit of Manchester United to take on a League of Ireland XI. 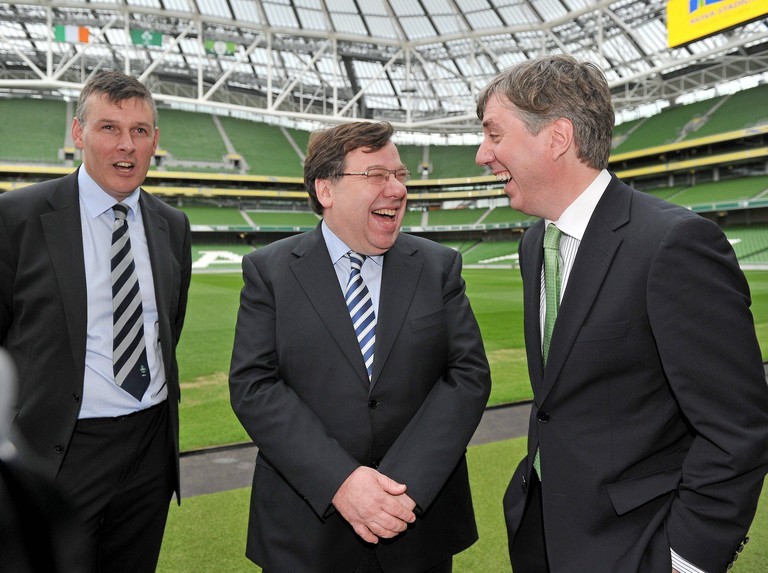 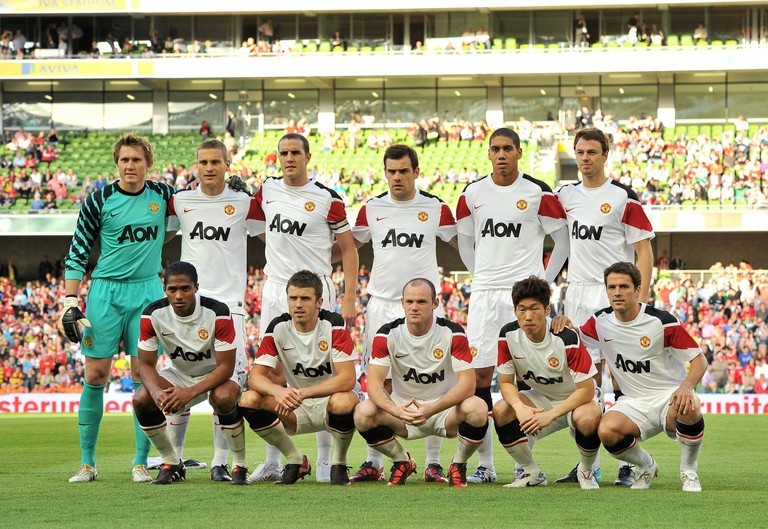 The development of Lansdowne Road was a long time coming, finally getting the go ahead after plans for The Bertie Bowl (Stadium Ireland) and Eircom Park went array. The interim period was facilitated by the GAA's Rule 42's abolition when rugby and soccer moved temporarily to Croke Park. By the time May 2010 had come around, the building of the stadium had already had its fair share of history.

While the early years of the Aviva seemed to be as much about the Vantage Scheme fiasco as anything else, there were some great games played. Many lamented the lack of the famed "Lansdowne Roar" in the new facility, but over time, this became less of an issue as the Aviva created its own memories and its own identity was forged.

We've been having a look back over the last decade and have somehow whittled it down to the 10 most memorable moments in the new ground. The 10 year anniversary was supposed to be marked by the European Championships in just over a month, but that will have to wait at least a year now.

For clarity here, this is a big moment, not necessarily the best games or the biggest occasions. Firstly, here are a few occasions that just missed out on the top 10.

While an all Portuguese tie between Porto and Braga was not what we envisioned, it was actually a very good game. Falcao scored the game's only goal, his 17th of the competition that season!

A Jonny Wilkinson masterclass gave Toulon a one point win over Clermont to start their three-in-a-row in the competition. In truth, an occasion that needed some Irish involvement.

The first of two times Ireland denied an English grandslam at the Aviva Stadium. This one was made all the sweeter for their complete dominance and the leak of an English video celebrating the grandslam before the game had even taken place.

With Mick McCarthy briefly at the wheel, things seemed to be looking up for Ireland on the pitch with some nice football being played against Georgia. Then, in the 33rd minute, tennis balls rained down on the Aviva Stadium pitch, a protest organised by fans against the FAI and John Delaney. Of course, Ireland scored almost immediately. A surreal few minutes. 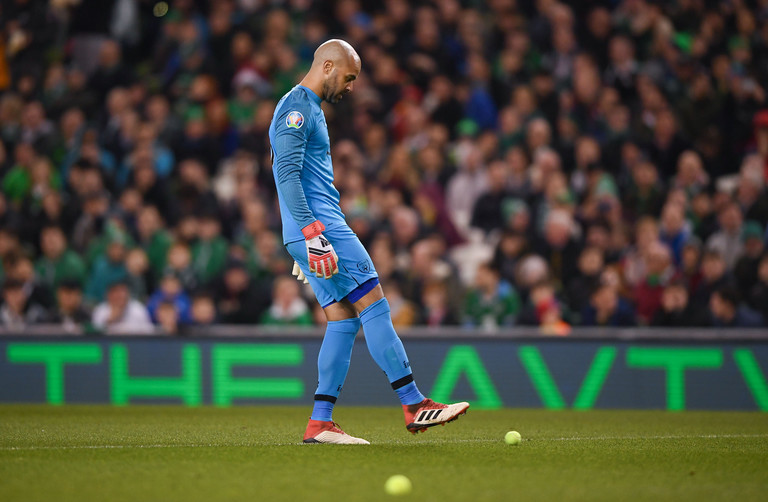 Shamrock Rovers had not won the FAI Cup since 1987 when they came up against Dundalk last year. With time and injury time up, the famine looked over. That was until Michael Duffy put a screamer into the top corner. Rovers' dream only had to wait another 45 minutes to come through though as they would ultimately win on penalties. But as a moment, this was hard to beat unless you're a Shamrock Rovers fans of course.

Leinster win the Double in 2018

Just a few weeks after securing their fourth European Cup, Leinster hosted the Pro 14 final at the Aviva Stadium for the first time, securing the double with a 40-32 hammering (despite the score!) in a brilliant, carnival atmosphere.

With those and lots more moments left on the cutting room floor, here's what we've gone with for our top 10. Please let us know what you would have chosen in the comments. 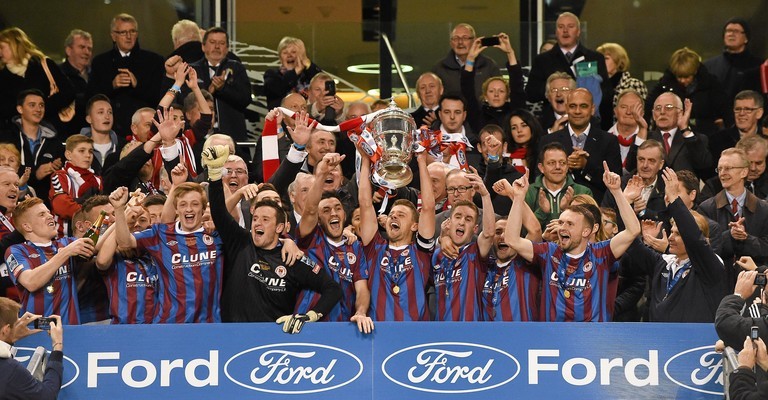 Christy Fagan scored his second of the game against Derry, who had beaten Pats in the final and finally, in the last second of the game, St. Pats' fans finally knew the hoodoo had been broken. After 53 years, they would finally life the FAI Cup.

Brian Kerr on commentary was perfectly placed to put the history of the moment into context. You'd forgive them for thinking it would never happen after losing seven finals since 1961 but their day had come at last. 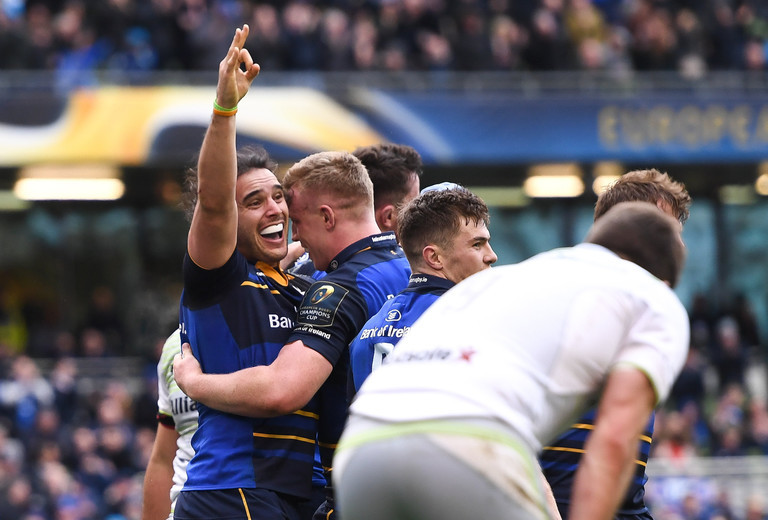 Saracens were a basically unstoppable force in European rugby for the latter half of the last decade. Only Leinster really ever showed themselves to be any match for them. In 2018, Leinster became the only team to knock them out of Europe in a four year period, after a brilliant display at the Aviva Stadium. Dan Leavy's try was the highlight of the day. Leinster would go on to claim their fourth European crown. 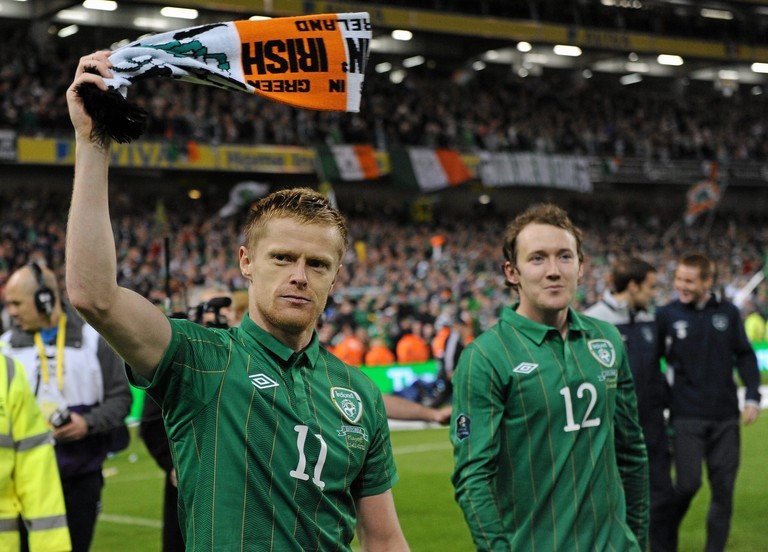 A strangely calm and celebratory occasion given Ireland had trounced Estonia 4-0 in the first leg. We were going to the Euros and we were there to celebrate that fact without the usual anxiety. The odd occasion was summed up by the entire stadium turning the green cards left on the seats of the Aviva Stadium into paper airplanes. They then attempted to throw them onto the pitch, but generally just hit other fans sitting in front of or below them. 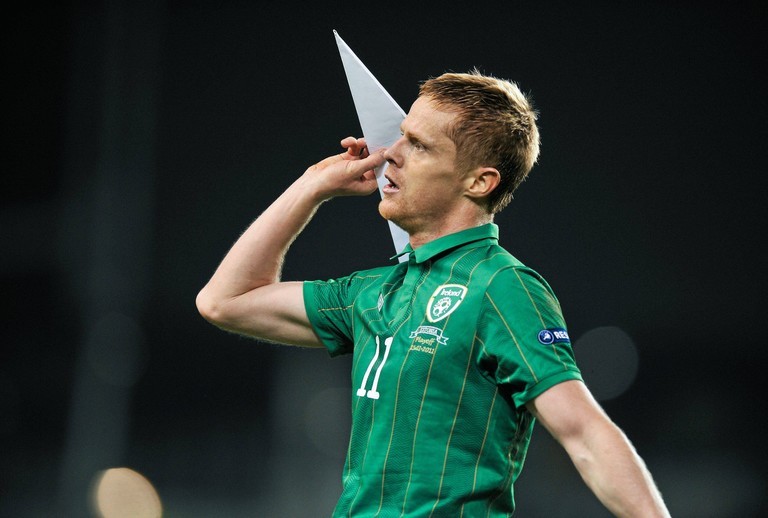 A weird night, but we hadn't qualified for anything in 10 years. The players were able to enjoy the occasion and the aftermath and the Aviva crowd gave them a suitable ovation after the game, justifying its place on this list. 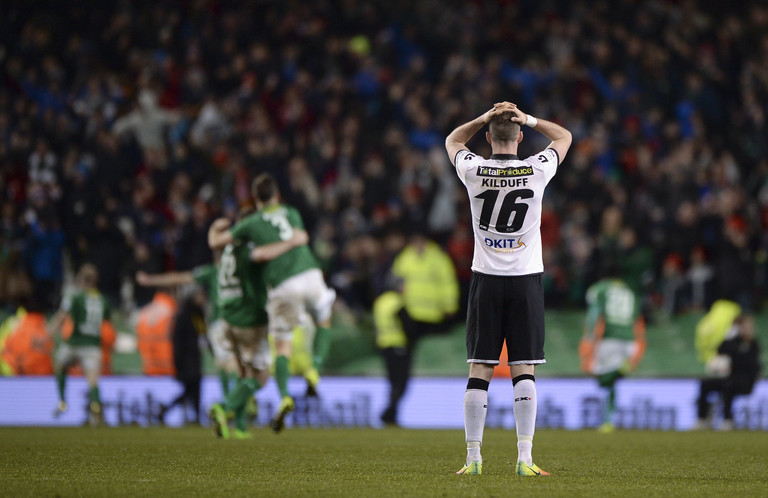 Cork City and Dundalk played in the FAI Cup final for four years in a row between 2015 and 2018. There was never more than a goal between them and three went to Extra Time, with the 2017 decider going all the way to penalties. In the end, they finished the run with two cups each. Of all four years though, nothing would match the 2016 final for drama.

With no goals scored after 120 minutes and with penalties looming, up stepped Seani Maguire to win the cup for Cork in the most incredible of circumstances. The dejection of the Dundalk players all around the pitch shows the enormity of the moment.

Unlike 2012, this wasn't a foregone conclusion and there was a lot of tension and nerves around the Aviva Stadium. Ireland had done well in the fog of Bosnia to get an away goal draw, but the job wasn't done. Even when a Jonathan Walters penalty put us ahead, things weren't secure.

Only after 69 minutes when Walters doubled the lead could we truly believe. We were off to France.

In 2018, Ireland would win the Grand Slam in Twickenham. Arguably, that journey began in the Aviva Stadium 12 months before when an unfancied and injury ravaged Ireland team put in the performance of their lives to deny England another Grand Slam. Once again, the English were "at it" before the game, but this was less about sticking it to the old enemy than putting up the kind of performance this team needed for themselves.

One moment stood out to characterise a brilliant performance. Summing up the performance of his life, Peter O'Mahony stole an English lineout on the Irish defensive five-metre line. The road from the crowd was deafening. It was one of the truly great Aviva Stadium moments. 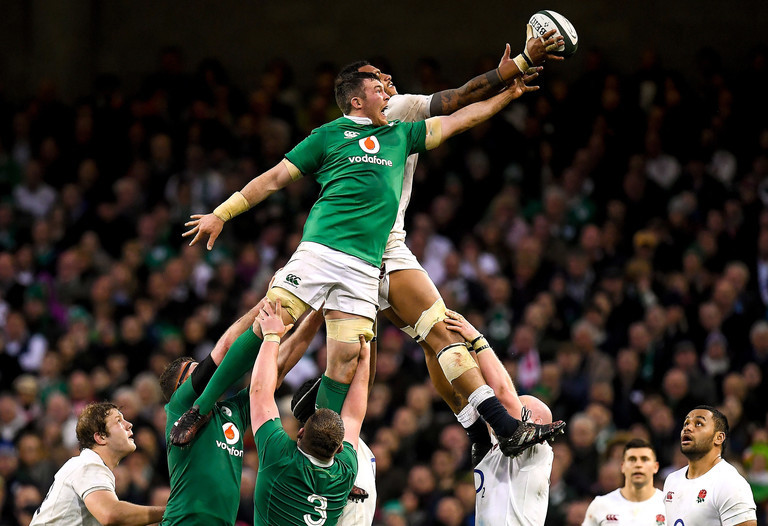 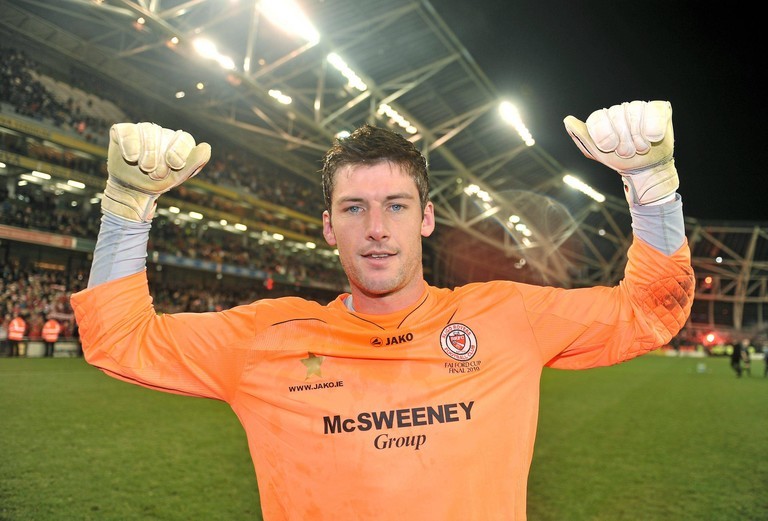 The first Cup final at the Aviva Stadium was one of the most dramatic. Shamrock Rovers, as mentioned earlier were without an FAI Cup since 1987. Sligo on the other hand had been beaten in the final to Sporting Fingal the year before. After a 0-0 draw, the game went to penalties.

Ciaran Kelly, who had given away a penalty to cost Sligo in the final the year before, saved all four Shamrock Rovers penalties in an incredible shootout and one of the great individual cup final performances of all time!

Amazingly, Sligo were back in the final the following year against Shelbourne, and Kelly would be brought off the bench especially for the shootout, where he would save two out of three and Rovers would retain the Cup! 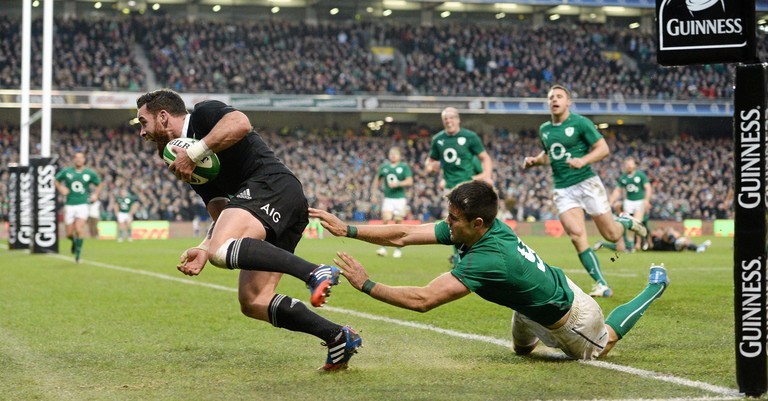 Three years before Chicago, Ireland had their greatest ever chance to beat the All Blacks for the first time. Up by five points and time is almost up. Ireland give away a stupid penalty and must withstand one last New Zealand phase of attack before securing their first ever victory against the gold standard of international rugby.  A couple of minutes later, Ryan Crotty had gone over in the corner and Ireland were beaten again. That win would just never come... 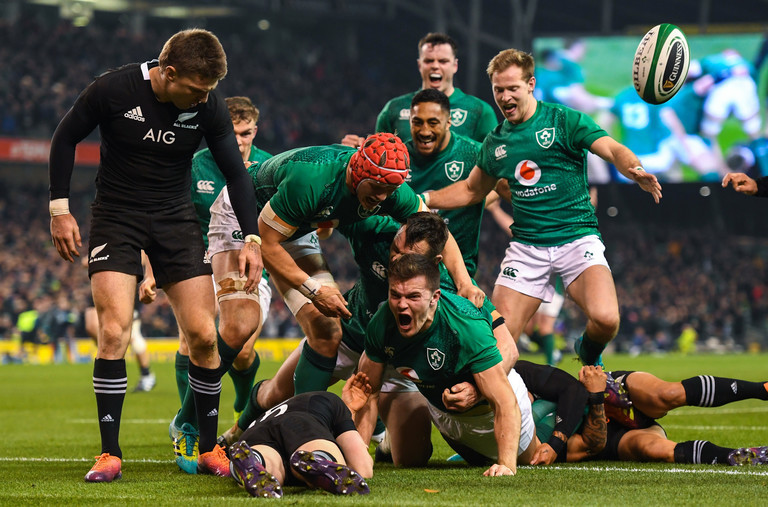 17 November 2018; Jacob Stockdale of Ireland celebrates after scoring his side's first try during the Guinness Series International match between Ireland and New Zealand at the Aviva Stadium in Dublin. Photo by Ramsey Cardy/Sportsfile

Ireland had ended the New Zealand hoodoo in 2016 on neutral soil but in 16 attempts had never beaten the All Blacks at home. In 2018, after a Grand Slam and a winning series in Australia, it was surely now or never.

Even so, you expected something to go wrong. Instead, Ireland maintained incredible discipline throughout, denying New Zealand a single try over 80 minutes and the impossible had been achieved.

Jacob Stockdale would become a superstar with his magical try in the second half, the only one of the game, while Peter O'Mahony's heroic try saving pick up late in the game will live forever in Irish rugby fan's memories. 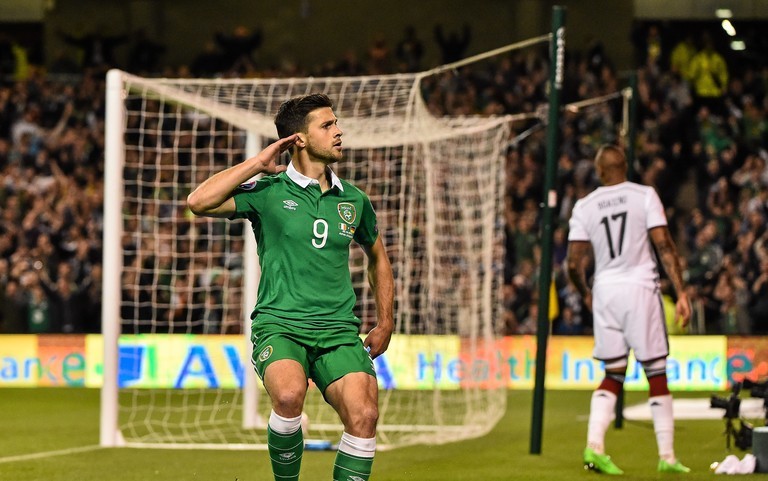 Of course, New Zealand being toppled in Dublin wasn't the only time the world champions were beaten in the Aviva Stadium. In 2015, Martin O'Neill's men did the seemingly impossible and the stadium erupted like never before.

While the "moment" of the New Zealand game was probably the final whistle, there's no denying what it was when Ireland beat Germany. Shane Long's goal from absolutely nowhere was the pinnacle of a sporting moment in a home stadium and is one that no Irish fan will ever forget.

Coming into that game, Ireland were in trouble. An awful middle to our  campaign for Euro 2016 had made qualification very unlikely. Nobody really saw Ireland getting more than a draw in this game, and without a win, the maths were starting to go against us.

Shay Given had started the game in goal and struggling with an injury, his kickouts had made Ireland seem incredible vulnerable in the first half. When Darren Randolph replaced him, that area of Ireland's game massively improved, but who would have thought it was would lead to one of the most famous goals in our footballing history.

Happy birthday Darren Randolph, author of the most important kickout of all timepic.twitter.com/zsnax6EqAD

Not bad for a first decade, hopefully the next few can be just as memorable.

Do you disagree with our list? Please get in touch and let us know what your favourite Aviva Stadium moments have been so far. 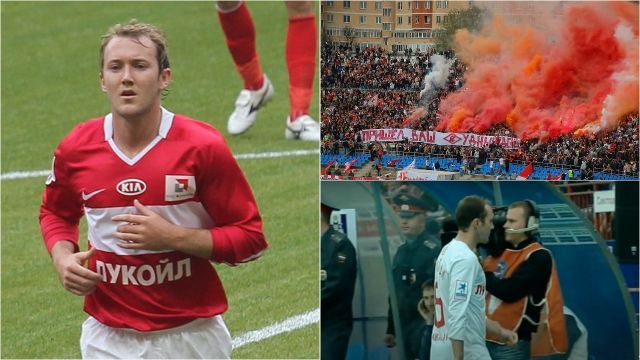 Rugby
5 months ago
By Donny Mahoney
Is Ireland Going Forward Or Backward Under Andy Farrell?
GAA
5 months ago
By Balls Team
Answering The Greatest 'What Ifs' In Irish Sport
Rugby
5 months ago
By PJ Browne
Seven Years After Leaving Munster, Danny Barnes Is Happier Than Ever
Popular on Balls
Football
19 hours ago
By Eoin Harrington
Sadlier And Duff Powerfully Put The Boot Into UEFA Over Rainbow Flag Stance
GAA
23 hours ago
By PJ Browne
'I Look At My Nephews - They've Bulked Up, They've Got Stronger'
Football
18 hours ago
By Donny Mahoney
Leon Goretzka With Pointed Goal Celebration Right In Front Of Hungarian Supporters
Football
17 hours ago
By Eoin Harrington
A Mad Night At The Euros Turned Into A Very Good Evening For England