The Balls Readers Picked Ireland's Strongest XV: Do You Agree?

During the week we asked the balls readers to take their chance to prove how good a Joe Schmidt they would be by selecting their own Irish rugby starting XV. We wanted to know the strongest team that Ireland have for when we take on Uruguay in the World Cup Final on the 31st of October.

Here is the XV that you want to take on Luis Suarez and the boys. Do you agree with yourselves? 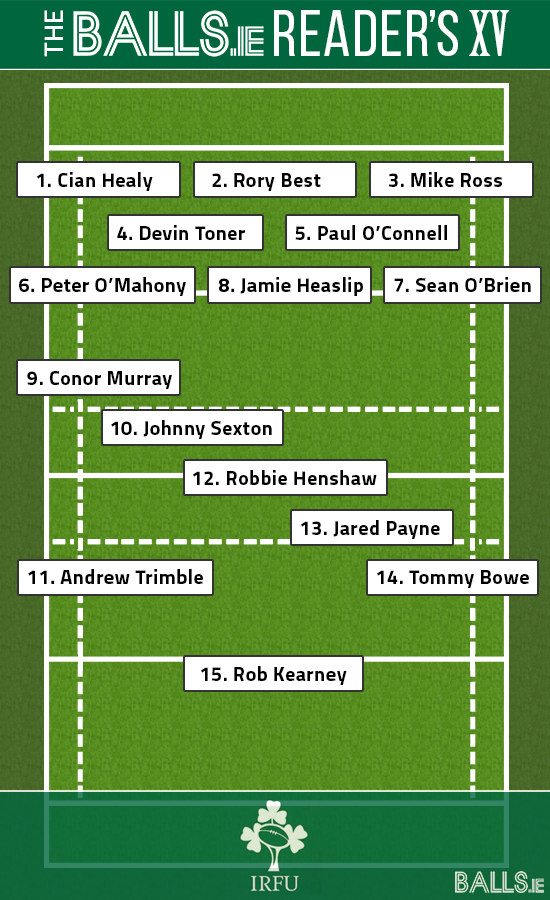 Fairly standard selection with no surprises. Rob Kearney is one of those fixtures in the Irish team that it's actually hard to know who is next in line. Today's fullback Simon Zebo takes the spot with 4%, just ahead of his Munster back three mates Keith Earls and Felix Jones.

None of you want Tommy to schlow down at all. A comprehensive victory with Andrew Trimble's 6% coming in second, with Earls scooping up the rest. Trimble won't be too upset though.

The first actual non landslide comes in Brian O'Driscoll's old position. Jared Payne is the man that Joe has entrusted into the jersey, and after a Six Nations where Payne got better with every game - he'll have a chance to show people what he can do on Saturday.

There was a lot of love for Robbie Henshaw (31%) to play where he does for Connacht, where he thrives in space; whilst Keith Earls' (20%) showing last week prompted Munster fans to select the Limerick flier. (Joke). There was also some love for Luke Fitzgerald at 9%.

Connacht's son Robbie Henshaw does get into the team after just losing out at 13 to Jared Payne. Some people must have swapped Henshaw and Payne, as the Kiwi born player was second with 10%. There was a thought to convert Madigan (7%) or Sexton (1%) from outhalf.

Veteran Gordon D'Arcy only had 8%.

Keith Earls did manage to get 8%, bringing his total percentage over four positions to 35.

The second most comprehensive victory in this poll. There's really nothing else to be said. Both Jackson and Madigan managed a percent, with no love for Cian Healy or Sean O'Brien.

95% of us know that Conor Murray is Ireland's best scrumhalf. He's rated along with Aaron Smith and TJ Perenara as one of the best in the world.

Why he didn't get the full 100%? Perhaps it's because 2% of people decided they wanted Joe Schmidt as their starting scrumhalf. He would be Irish qualified after living here for so long, and is uncapped.

The vast majority of you really want Healy to recover from his injury problems. Just 9% wanted Six Nations starter and clear deputy Jack McGrath in though.

Given the overwhelming majority that most of the other starters received so far, it's perhaps surprisingly that Ulster captain and member of the leadership group Rory Best *only* got 79% of the vote.

There are clearly some people who think that Sean Cronin's ball carrying is worth a vote.

It's perhaps surprisingly that only the second Irish tighthead in history (joke), only gets 86% of the vote. I mean, who else could you have voted for. Schmidt clearly loves the Cork prop - he's the only player that has started every single international test for Schmidt.

John Hayes hasn't been forgotten by some, with the four years retired prop garnering 3% of the vote.

Toner wins just over half of the vote here to be O'Connell's partner, with a lot of love for Iain Henderson (27%). There were some votes for back row Peter O'Mahony (5%) who has played on the wing for Shannon you know. 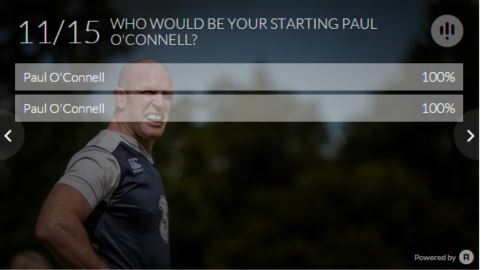 I think it's quite apt that the poll results show that there are two 100% percent results for Paul O'Connell.

Aside from being selected at second row, the Munster captain and future Ireland captain is selected in the blindside flanker position with no fuss.

Sean O'Brien is the second choice, but he's likely not to mind because...

He's the top draw at openside with another overwhelming victory. You have to fit O'Brien in somewhere. O'Brien received 105% of votes in total (8+93+4) implying that some geniuses selected him more than once. If only there were a team of Sean O'Briens.

Bionic man Jamie Heaslip may get a lot of flak, but he's got the backing of balls readers with a big margin.

Much like at fullback, no one knows who is the actual back up to Heaslip, with opinions split between Jordi Murphy and Sean O'Brien

Hurling
4 months ago
By Balls Team
The 15 Best Ever Performances By A Player On A Losing Team
Rugby
9 months ago
By PJ Browne
'I Was In The Tractor The Other Day Thinking How Lucky Farmers Are'
Rugby
1 year ago
By Kevin Beirne
Seán O'Brien Sanctioned By IRFU For 'Inappropriate Behaviour'
Popular on Balls
Football
15 hours ago
By Balls Team
Furious Clint Dempsey Smashed Window After Late Fulham Team Change
Football
17 hours ago
By Gary Connaughton
Report: Kylian Mbappe's Massive Wages Demands Too Much For Man City
Football
21 hours ago
By PJ Browne
DUP MP Calls For Rangers Title To Be Recognised In Parliament