Connacht's search for a Pro14 play-off spot saw them welcome Cardiff Blues to Galway today and Andy Friend's side put on a magnificent display of attacking rugby. They succeeded in their quest to join the other three provinces in qualifying, winning on a scoreline of 29-22.

Friend made several big calls coming into the crucial clash, including selecting the in-form Caolin Blade over Kieran Marmion at scrum-half. The decision paid off when Blade dotted down in the first half after a fantastic Paul Boyle break and offload.

The half-time score was 14-7. Yet the best was yet to come. In the second half, Connacht launched a field length run. Bundee Aki kept the play alive with an offload before a brilliant Matt Healy break bought the home side huge yards.

Jack Carty then stepped up with a sublime chip and chase to finish a try of the year contender.

It was yet another moment of magic in what is becoming a sensational season for Carty. 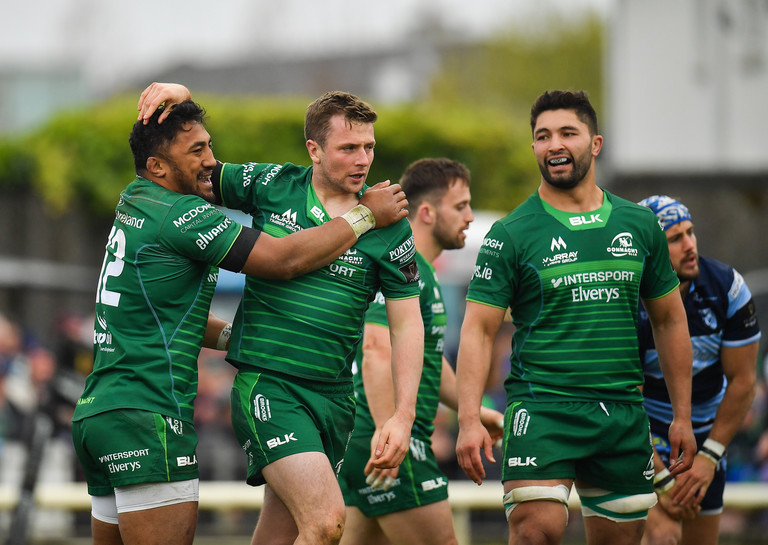 There was drama still, Josh Turnbull scored a try to make Cardiff pressure pay only for Connacht to respond directly from the kick-off. After Cardiff failed to deal with Carty's drop-kick, winger Matt Healy managed to remarkably stay in field and touch down to secure a bonus point victory.

In front of a raucous home crowd, Connacht claimed their spot in the playoffs and Champions Cup. The good news for the Sportsgrounds faithful is that this year's adventure isn't over. Jack Carty said it best, "you want to be playing the big teams and we'll be doing that next year. But we're not finished yet."

Rugby
2 years ago
By Maurice Brosnan
Why Do Munster Keep Shouting 'Oompa Loompa'?
226

Rugby
4 years ago
By Conor Neville
WATCH: "That Is One Of The Most Ridiculous Decisions You'll Ever See"
Previous Next

Rugby
5 months ago
By Eoin Harrington
2021 U20 Six Nations To Kick Off In Cardiff In June
Rugby
2 years ago
By Maurice Brosnan
Why Do Munster Keep Shouting 'Oompa Loompa'?
Rugby
4 years ago
By Conor Neville
WATCH: "That Is One Of The Most Ridiculous Decisions You'll Ever See"
Popular on Balls
Football
11 hours ago
By Eoin Harrington
John O'Shea Explains How He Ended Up In Goal For Manchester United In 2007
GAA
17 hours ago
By PJ Browne
Three Live Club Football And Hurling Games On TV This Weekend
GAA
12 hours ago
By PJ Browne
Incredible Penalty Halts Premature Celebrations In Galway
GAA
14 hours ago
By Maurice Brosnan
'Bad Coaching. I Think That Is A Big Problem In The GAA'