Northern Hemisphere rugby is wrong. At least - if you hadn't watched any of the World Cup and only read the conclusions of the media - that's what you'd be led to believe. It's the easy conclusion to make after the four Rugby Championship teams made up the World Cup semi-finals.

It's easy to look past the narrow loss for an injury hit Wales, or how the sixth placed Six Nations team pushed the Rugby Championship winners as close as they did. Less excuses can be made for Ireland, England, and especially France.

The consensus is that the north needs to change their philosophy to compete.

But one man is going against the grain. That man, is a former Ireland head coach. That man is Eddie O'Sullivan, and he has a better idea to bridge the gap. 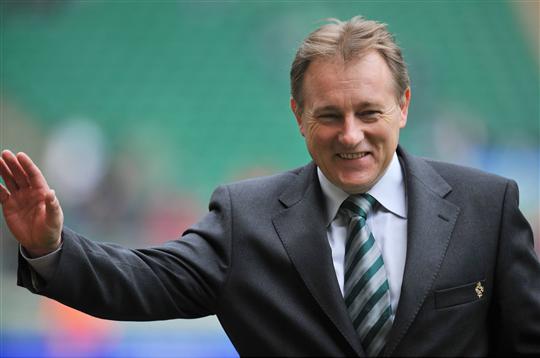 Writing in his column for the Times, O'Sullivan defended the style of rugby played in the northern hemisphere - and rejected the notion that the southern hemisphere style should be implemented forthwith up here.

O'Sullivan argues that the notion of northern hemisphere teams needing to adapt their style hints at a logic that would mean the Six Nations teams need to collude in order to come up with a gameplan to beat the Southern rivals:

There are suggestions that the northern-hemisphere teams need to adapt their style of play away from the trench warfare that dominates the European leagues. To follow on this line of logic it has been suggested that the Six Nations teams come together and plot a strategy to change how the game is played.

The notion of the home nations colluding to design a style of rugby to defeat the southern hemisphere is asinine and unnecessary.

What O'Sullivan wants to improve the standard in the northern hemisphere is very different. He thinks that the differences in season are relevant when looking at the alternate styles. He points out that there is more rainfall in New Zealand than in France - dispelling the notion that their style of play is because of the dry fields that allows for better handling.

First, the season for international players from the southern hemisphere is nine months long, whereas, the European season lasts ten months. That one-month differential is crucial when it comes to rest and preparation during the off-season.

That one month difference - as well as on average ten game difference - means that the Southern players aren't as fatigued as European players. This affords them more time to work on their core skills.

This, O'Sullivan says, is why the northern hemisphere calendar needs to change. Shorter seasons, and less moving players between clubs and country would change everything.

The European player constantly changes tournaments throughout the season from domestic rugby to European competition. This dynamic is interrupted for a month by the autumn internationals in November and for two months by the Six Nations in the spring.

The longer, more focused assembly times for the southern-hemisphere international squads offers more time to develop their style of rugby.

It's a drastic idea, and one that faces a lot of barriers before it happens. But it's certainly something we should get behind.

See Also: Incredible Rumour Could Have Major Ramifications For Irish And European Rugby

See Also: The Six Nations Could Be Set For 2 New Additions Very Soon