How To Watch Ireland Vs New Zealand: Match Preview

Ireland face New Zealand in the Aviva Stadium this weekend in a huge test for this Ireland squad. They were very impressive last week against Japan but this will be another step up. The All Blacks have looked ruthless in the autumn series so far, putting up huge scores against Italy and Wales. It will also be Andy Farrell's first big test against a southern hemisphere side. Tickets for this match are as rare as gold right now so if you weren't lucky enough to get a ticket, here's how to watch Ireland vs New Zealand on TV.

How to watch Ireland vs New Zealand

Ireland vs New Zealand is on Saturday 13th November with kick-off at 3:15pm.

The match is live on RTÉ 2 and their coverage starts at 2:15pm.

The match is also live on Channel 4 with their coverage starting at 2:45pm.

Ireland put in a brilliant performance last week against Japan. They emphatically won 60-5, playing some very entertaining rugby, throwing offloads and running excellent support lines. It was a very positive outing for Andy Farrell but they know that this is going to be a bigger challenge on Saturday. If Ireland can keep this momentum up, it could be another monumental day in Irish rugby.

In squad news, Gavin Coombes has been ruled out for the weekend. The young Munster back rower has been suffering from illness and didn't train with the squad this week. In more positive news, Robbie Henshaw has returned to the squad and "will be re-integrated into team training across the week as he completes his rehab programme."

The only change Ireland have made from their victory against Japan last week is Iain Henderson returning to the second row to partner James Ryan. Tadhg Beirne drops to the bench as Johnny Sexton leads the side again.

Here it is! Presenting the Ireland Match Day 23 for Saturday's #AutumnNationsSeries clash against the @AllBlacks at a sold-out @avivastadium 👊#TeamOfUs | #IREvNZL

The All Blacks come into this match after beating Italy 47-9 in Rome last Saturday. That result came after their 54-16 dismantling of Wales in Cardiff the week before. They're playing some sensational stuff and are scoring tries for fun, especially Will Jordan, who has scored 16 tries in just 11 matches since making his debut in 2020. Ireland will have to try stop the dominant Crusaders winger.

Aaron Smith has returned to the squad this week after not being selected for the trips to Wales and Italy. The veteran has come in lace of Brad Weber who got injured in the match in Rome. They've named a strong lineup for the trip to Dublin, with the same forwards to started against Wales set to start on Saturday.

It will be the first All Blacks visit to Dublin since that memorable day in 2018 where Jacob Stockdale's try was enough for a memorable victory for Joe Schmidt's men. Hopefully history will repeat itself on Staurday.

See Also: 'One Out-Half Isn’t Going To Win You The World Cup, You Need Two' 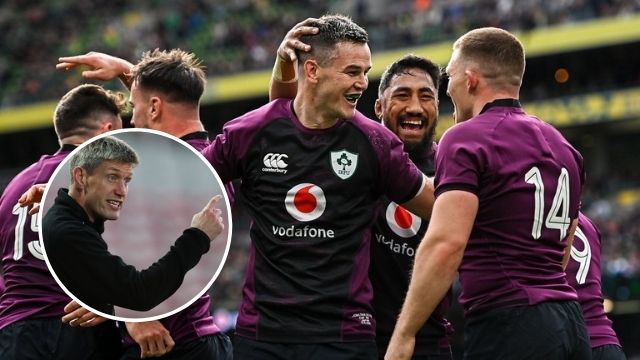