How To Watch Leinster Vs Scarlets In The URC

Leinster continue their URC campaign at home to the Scarlets this weekend. The two have had conflicting fortunes so far this season as Leinster are unbeaten while the Scarlets have been struggling. However, on their day these sides can really play and it could be an exciting match. Here are all the details of how to watch Leinster vs Scarlets.

When is Leinster vs Scarlets?

The match is on Saturday 16th October with kick off at 5:15pm.

How to watch Leinster vs Scarlets

The match is live on Premier Sports 2 from 5pm.

It is also live on TG4 with their coverage starting at 4:55pm.

The match is available on URC TV on demand if you subscribe to the service.

Leinster come into this match after their 43-8 dismantling of Zebre last Saturday. The defending champions looked back to their best in a dominating display. Adam Byrne and Jordan Larmour returned by scoring tries and have added even more depth to Leinster's already deep roster. They both went through that game unscathed and are available for the Scarlets.

On the other hand Harry Byrne picked up a hip injury and will be out for this match along with Rory O'Loughlin. Meanwhile, Scott Penny will be further assessed ahead of this match, having picked up a couple knocks recently. In positive news Jack Dunne is to return to full training this week.

🚨 | Here is your #LeinsterRugby team to face Scarlets at the RDS Arena tomorrow evening. (KO 5:15pm.)

Tadhg Furlong and Jack Conan are back! 😍 🙌#LEIvSCA #URC pic.twitter.com/aRTYZhKZLv

Scarlets have had a rough start to the season, having lost two games already. On Sunday they were especially poor in a 43-13 defeat to Munster at home in Llanelli. They were very poor, despite fielding a strong side with Welsh internationals like Ken Owens, Jonathan Davies and Rob Evans. The latter expressed his disappointment in a very poignant post match interview.

🎥 Rob Evans sums up the disappointment after today's loss

The Scarlets will be out to prove the doubters wrong and make up for their poor display on Sunday. They have great quality in their squad and on paper should be much further up the table than they are right now. They'll be more motivated than ever to end Leinster's unbeaten run. 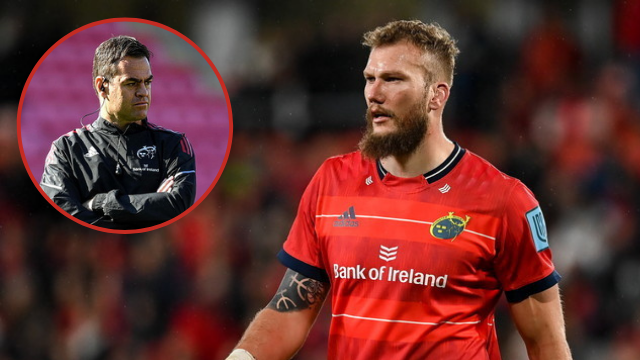 Rugby
2 weeks ago
By Michael Bolton
How To Watch Stormers vs Leinster This Weekend
Rugby
3 weeks ago
By Michael Bolton
How To Watch Leinster v Cell C Sharks
Rugby
3 weeks ago
By Colman Stanley
The Best Tries From The Career Of The Flying Hooker Sean Cronin
Popular on Balls
GAA
3 days ago
By PJ Browne
Mayo's Padraig O'Hora Using Football To Promote His Real Passion
Rugby
1 day ago
By Colman Stanley
'That Pace, That Intensity, That Organisation' All Black Legend Has High Praise For Leinster
GAA
1 day ago
By PJ Browne
Jim McGuinness's Gut Tells Him Dublin Will Win The All-Ireland
The Rewind
2 days ago
By Eoin Harrington
Watch: Brilliant Dermot Morgan Dublin Segment From 'The Travel Show' Resurfaces