Be clever and be in control. If there was one mantra of Joe Schmidt's reign, this would be it.

When Ireland are successful it is striking how disciplined and intelligent they are. Garry Ringrose referenced how they can be "really intelligent" after the England victory last year when Tadhg Furlong's centre cameo saw him free Bundee Aki which led to CJ Stander's try.

Their discipline is a key factor. It's one of Schmidt's staple standards. Ireland routinely invite referees into training and target single digit penalties conceded in games. Schmidt's steel is evident in every facet. Paul O'Connell once told a story that a player dropped a room-key during an Irish camp during the New Zealander's early days.

Schmidt then held up the key at a team meeting: “Just to let you know, that sort of stuff won’t be tolerated. If we’re sloppy off the pitch, then we’ll be sloppy on it.”

It is also self-enforced.

A good, long placement is a simple platform Ireland demand. In his autobiography, O'Connell explained what would happen if that standard was not met: "Johnny Sexton wouldn’t be long letting them know about it. ‘That’s bullshit!'"

Throughout this Six Nations, players have looked to capitalise on loose ruck ball with varying degrees of success. Think of Billy Vunipola conceding a penalty for jumping in at a ruck against Wales when he thought the ball was out.

Jaco Peyper roared "no!" and awarded a penalty to Wales. 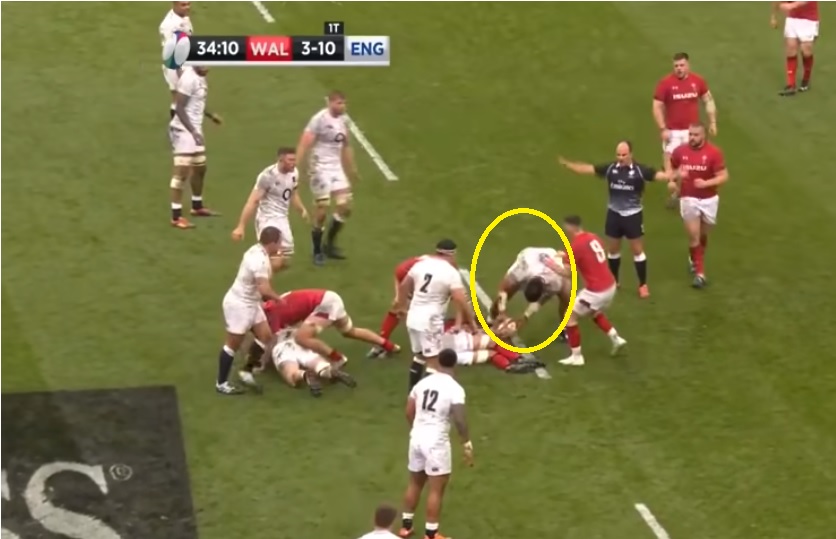 On Sunday, Cian Healy tried to do similar. Having spotted the ball roll and the scrum-half with hands-on, he raced in and tackled Antoine Dupont. 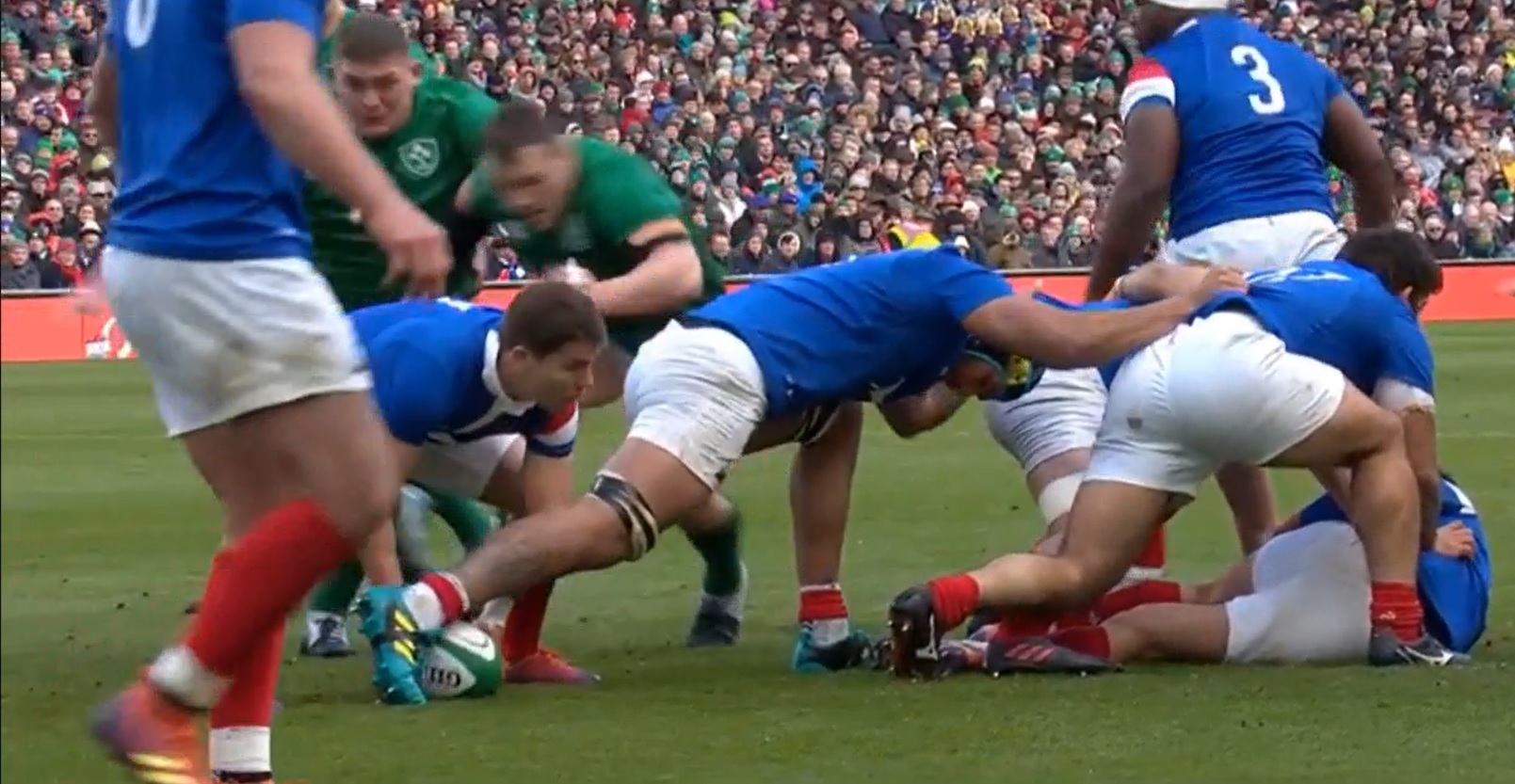 The ruling here is debatable. In this case, referee Ben O’Keeffe deemed the ball 'out'. Firstly, a scrum-half can have his hand on the ball while it is still a ruck. While it was mistakenly explained on commentary that Cian Healy was allowed to move because Dupont touched the ball, this is not the case.

However, Sébastien Vahaamahina did take a step back to try cover as the ball rolled. This could be interrupted as 'out'. Furthermore, he is not shoulder-bound. 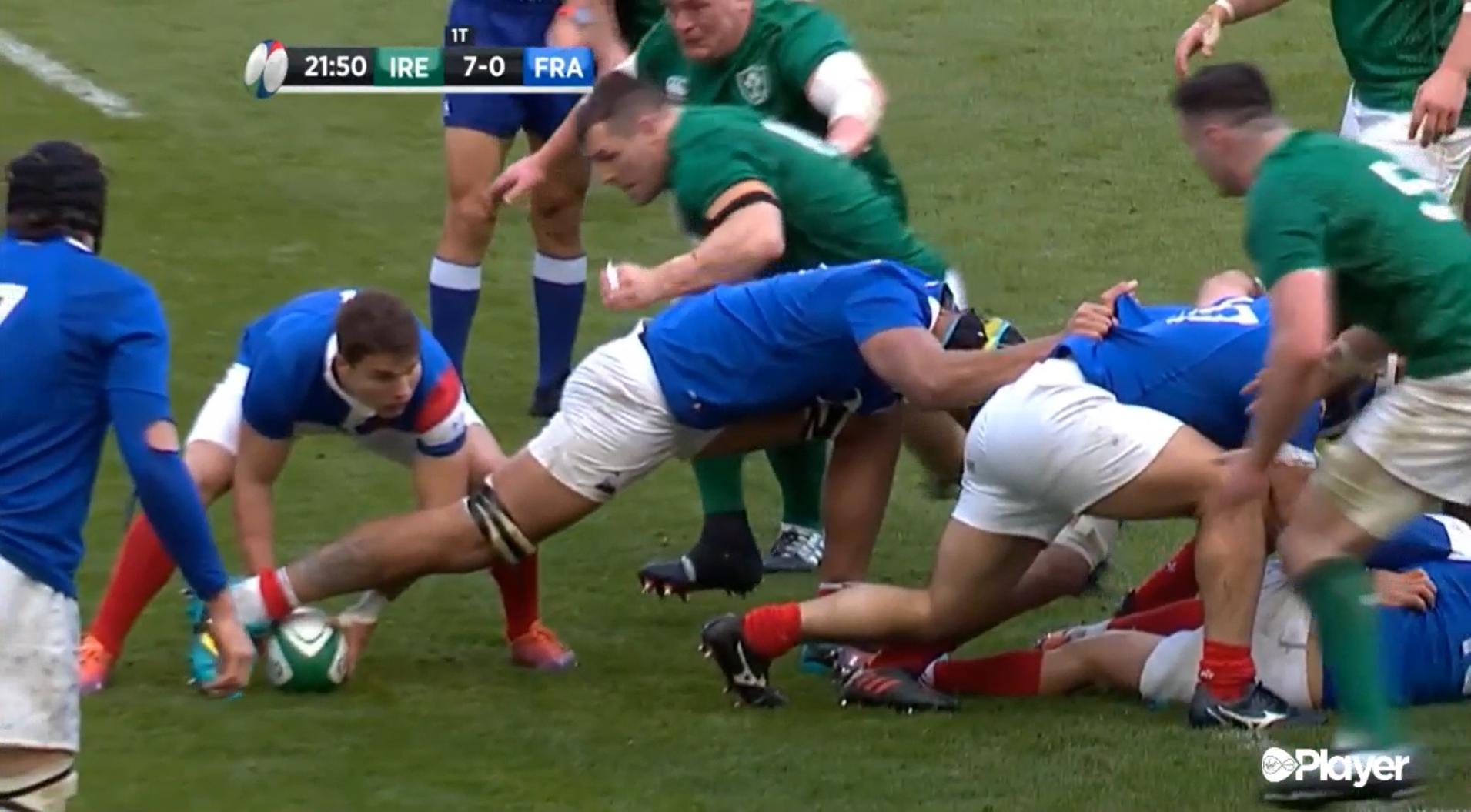 None of this is the point. The point is that Johnny Sexton thought it was a ruck and thought Healy had infringed. Ireland had France under pressure and he assumed Healy had let them off the hook. So he let him know about it.

Notice Sexton's reaction here. The out-half immediately took out his mouth guard and made for Healy: "You can't play the nine! You can not play the nine!" 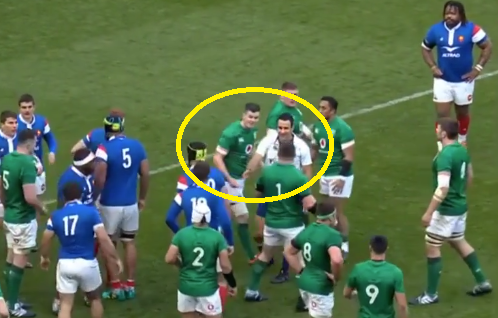 Moments later, the referee can be heard calling out 'Johnny!' Soon after he explains why it was not a penalty to France: "The ball was out, so he's (Dupont) got to be careful."

Cian Healy knows his rule-book. In the first half, he came close to an incredibly opportunistic try when he noticed a ruck form at the edge of the try-line. There is no offside line when the ball touches the line or is in goal. France seemingly forgot this, the Leinster man didn't.

Unfortunately, it did not work out as Healy just failed to get downward pressure. Notice how a phase earlier, Sexton gestures and calls "line!" Murray then checks the ball positioning. 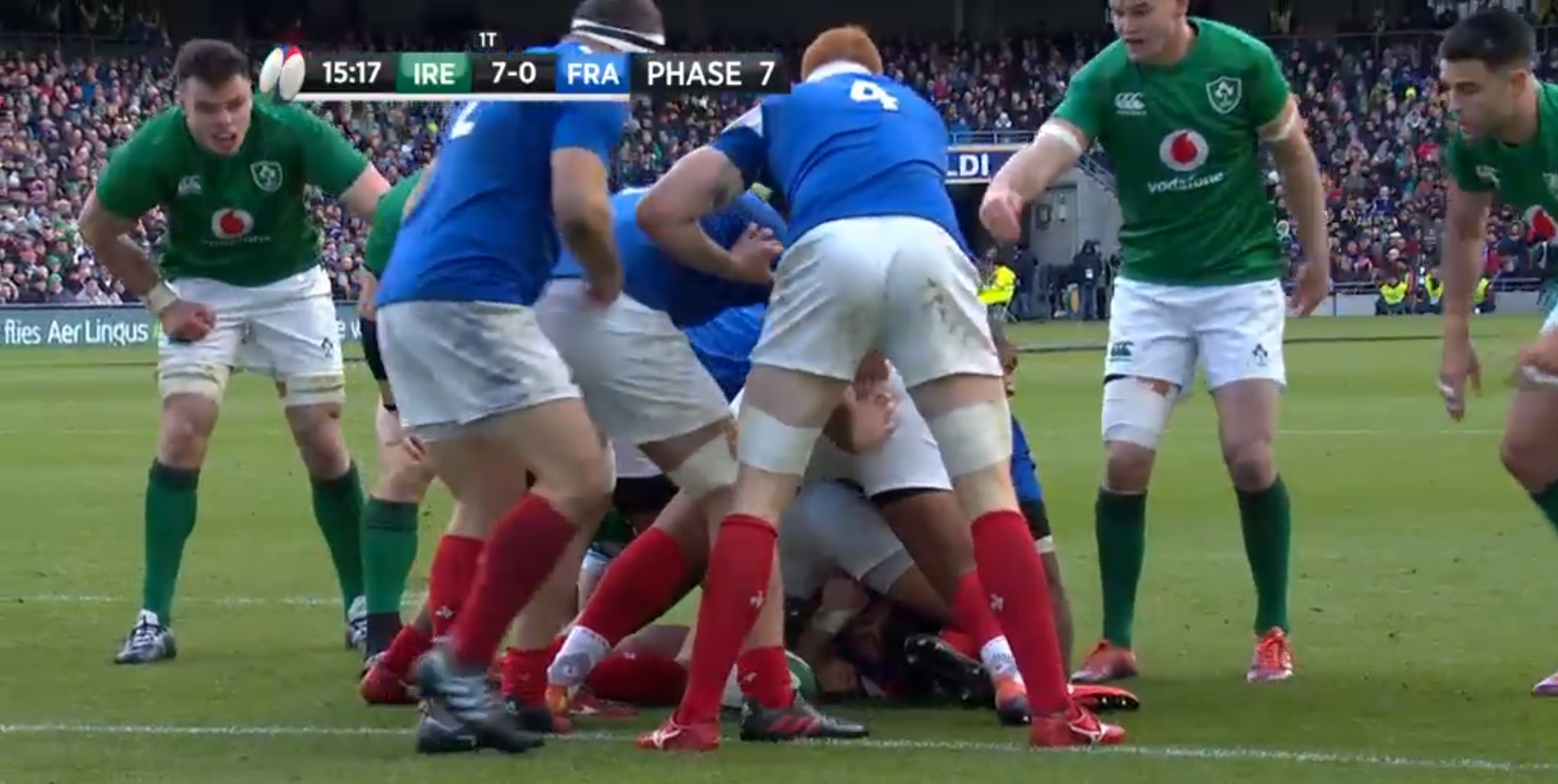 Healy's eyes are then monitoring the ball, waiting for it to touch the line. 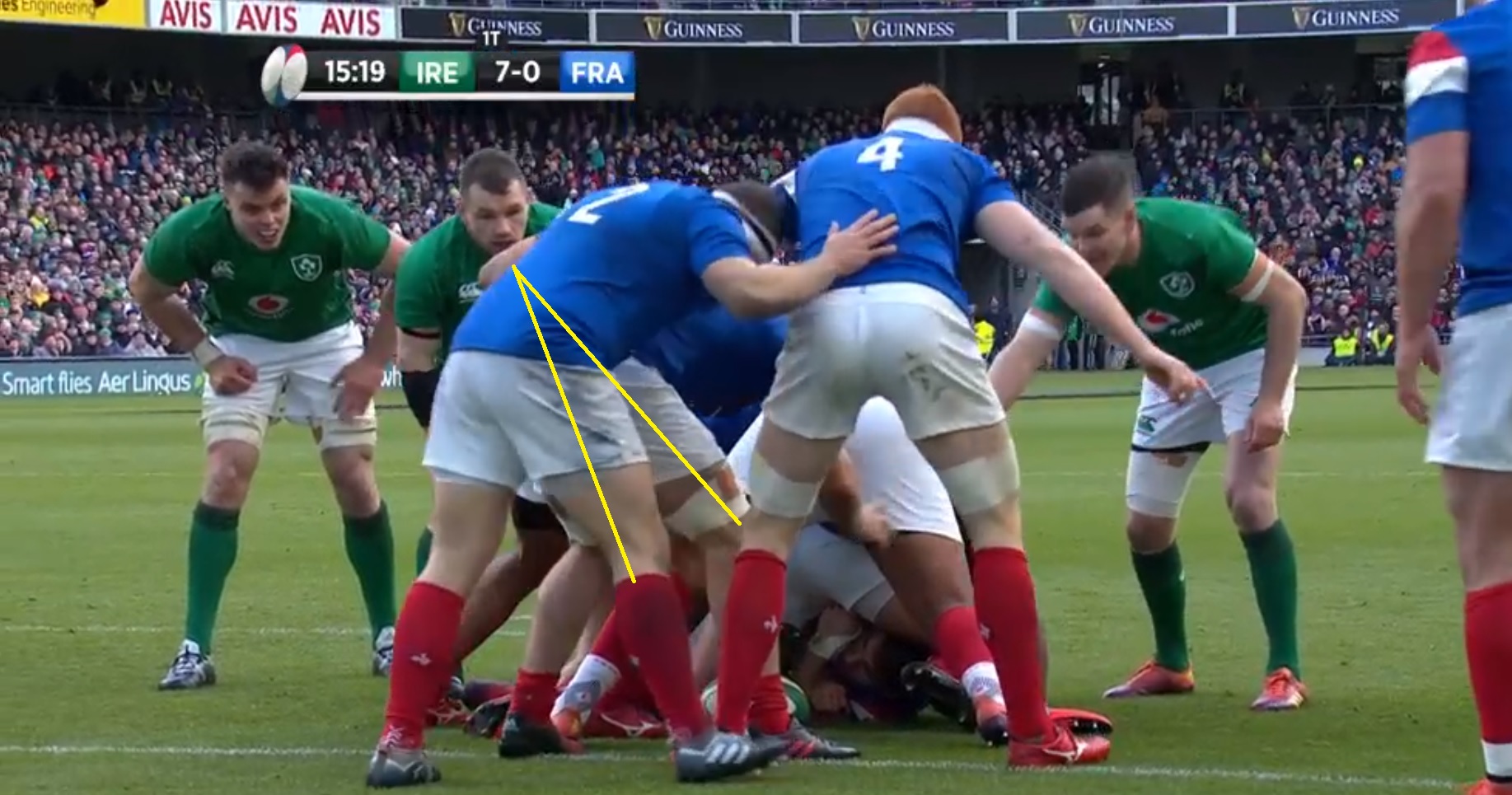 Control, clever, capitalise. A key process in any successful Schmidt side and something Ireland will need in abundance this Saturday.