The efficient machine of yesteryear had coughed and spluttered its way through the early portions of 2019, but finally, Ireland fired against a facile French challenge in Dublin.

Passes that had been dropping stuck. Kicks that had been wayward corrected. Tackles that were feeble boomed. It was a much-needed performance more than the result.

For France, the writing was on the wall by half-time. In reality, it was obvious long before that. They lacked the will and skill necessary to offer any sort of meaningful threat. Yet Joe Schmidt will not and should not care. Everyone knew their job and executed correctly. A bonus-point victory is to be welcomed. It finished 26-14. 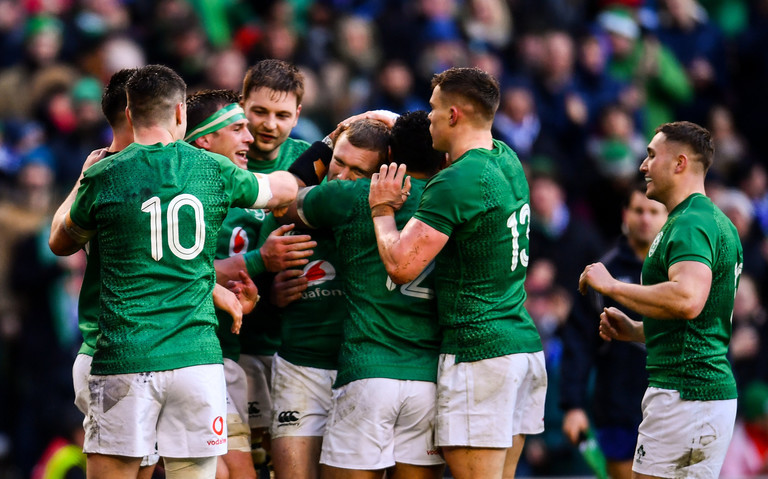 Ireland regained a priceless currency; form. They'll look to cash it in a mouth-watering final day contest in Wales. 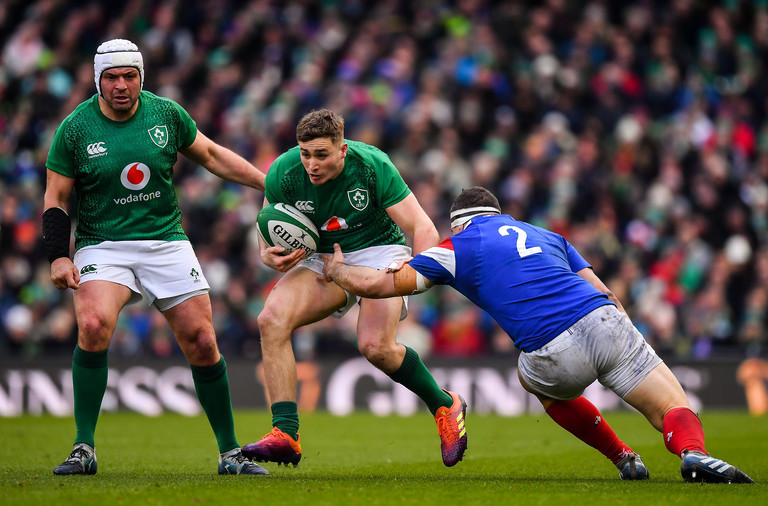 Did well having been parachuted in on short notice for Rob Kearney. Great kick into the French backfield to set up a line-out that led to Ireland's first try. Always looked lively with ball in hand, never asked any question in defence.

Converted a smart and simple line-out move when he stood in at the front, looped around the back of the maul and take a soft CJ Stander pass on the inside to speed in. An eye-watering 51 metres made. 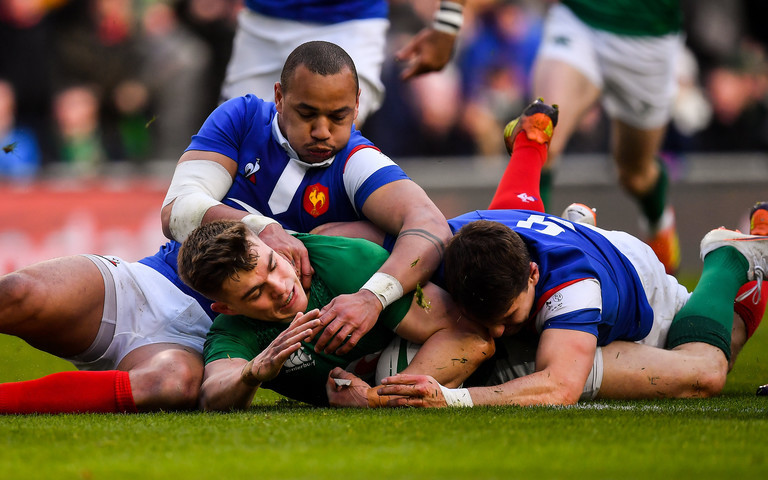 Ireland have been crying out for a ball-playing alternative at first receiver and Ringrose immediately demonstrated why with a kick downfield from his first possession. Sensational take after the half-hour mark but just lost control before the line. Conceded a penalty for a high tackle. Shot out of the line and missed an obvious tackle in the second half although forced Fickou back in field in the process. What he may have lacked in match fitness he made up for with game intelligence.

Once again, made little ground with his carrying but it was often as a first-up carrier. Made up for a poor pass with a lovely offload. Combined nicely with his Connacht team-mate Carty in the final quarter.

His final whistle stats of one clean break and no successful tackle may suggest a quiet game but the Ulster man did well when called upon. Silly kick deep with a man out wide but it did not prove costly. Didn't get the same opportunity to cut loose like his back-three partners but his kick-chase is invaluable.

Welcome back, Johnny. We've been expecting you. Typical wrap around and dart to score his try. Flawless from the tee. Great hands to send Keith Earls through the gap. Came off for Jack Carty midway through the second half. 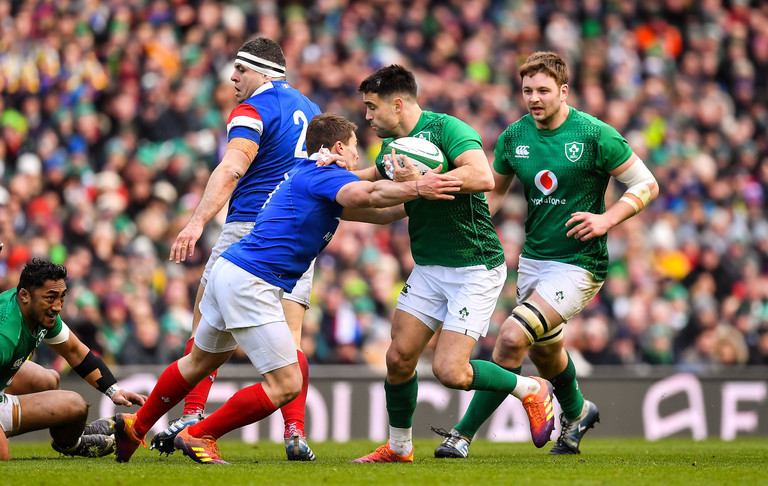 His timing at ruck-time has been an issue, with the ball often too slow in the opening three games. It's a facet of the game quickly corrected. Timed his pass to perfection for Jack Conan who was moving wide and it resulted in Ireland's third try.

Nice piece of opportunism to try dive in and touch down early on. Followed it up with a big carry shortly after. Won his scrum battle. Replaced by Dave Kilcoyne after 50 minutes, with Cardiff clearly on management's mind. 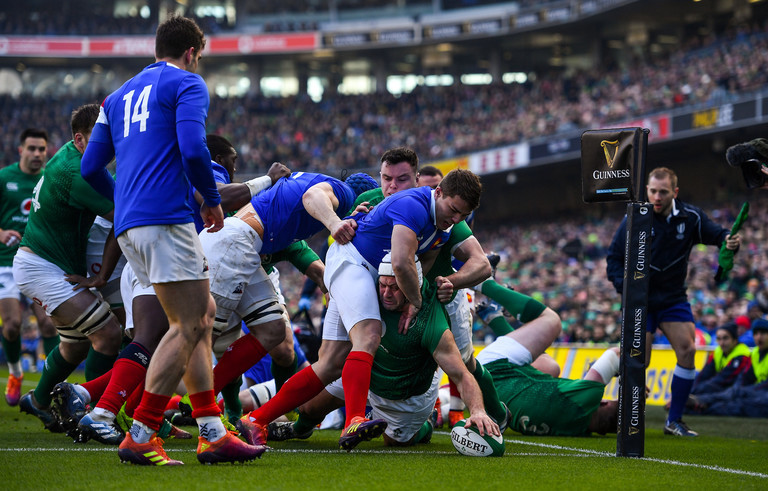 Brilliant strength for the game's opening try after just 3 minutes. Squandered good opportunity with an overthrow shortly after. Interesting to see him used as a first-receiver pivot on a number of occasions, taking the ball but quickly spreading it wide instead of carrying. Something Joe Schmidt can certainly build a strike play around. A fitting farewell on his final Six Nations home game.

Monster presence at the breakdown, blew Lamby out of the water with a ferocious clear-out early on. This was a pack-led performance.

Offers so much in defence, both in terms of his tackling ability and breakdown prowess. Uses his large frame to considerable efficiency to infuriate opposition ball.

It looks likely this will be Ireland's starting second-row combination. Ryan brought his usual terrific tackling to the game and finished with 10, with none missed. His footwork when carrying is an under-rated skill. Deservedly awarded Man of the Match.

The line-out majorly misfired against Italy and in response to that Ireland used O'Mahony as their main jumper, to the extent where it is almost predictable. The saving grace is that he is a joy to throw to, both in terms of his handling ability and the height he reaches. 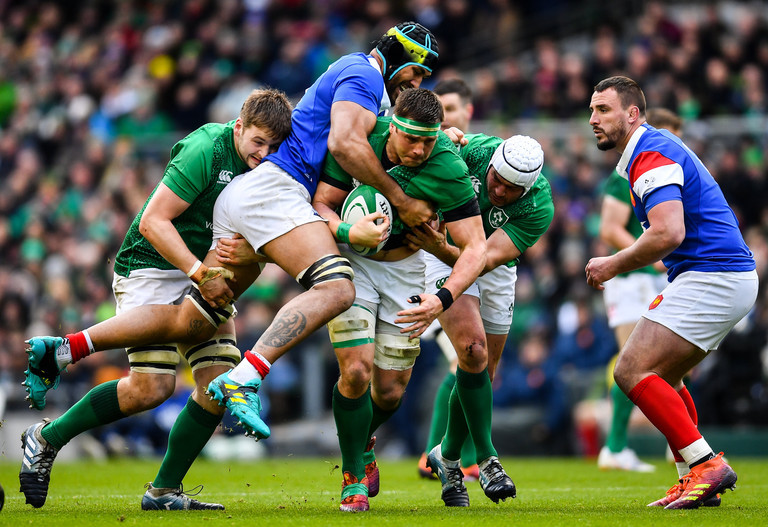 With his first carry floored Ntamack to give the young out-half an early welcome to Dublin. Collectively as a group, this was a team-led performance. Ireland will need another big game from Stander next week to counter a physical Welsh pack.

Jack Conan was magnificent, particularly in terms of his carrying ability. It poses the question, did Ireland stumble onto another potential back-row combination? Jack Carty demonstrated supreme play-making skill, Ultan Dillane carried like a trojan and secured a superb steal. Dave Kilcoyne was devastating at scrum-time, John Cooney was lively throughout. Niall Scannell continued the line-out brilliance. Andrew Conway completed the replacements with five minutes left.

All the changes did bring a slight drop in intensity. Ireland dwindled slightly in the final minutes with the game all but over.

Good if not great. Back on track. The ship steadied and headed for Wales.

SEE ALSO: Rugby's Elitism Continues To Hinder Any Prospect Of Worldwide Growth For The Game