From the high of Irish success versus Scotland to the low of failure against Japan, one issue has been consistent; the low quality of work at the breakdown.

Ireland lost three rucks and conceded more penalties than Scotland did during their World Cup opener. Against Japan, it only got worse.

Twice with ball available, slow attacking play allowed Japan to steal at a ruck. Of 19 conceded points, nine came from penalties conceded at the breakdown and it could have been more if not for two missed kicks. 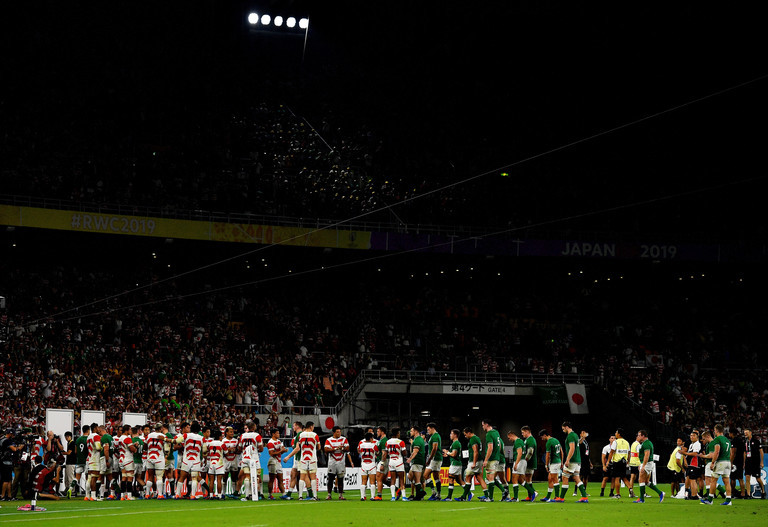 Joe Schmidt mentioned this area immediately post-match and how it proved costly.

"It was very, very hard to get the ball off them, a lot of very deep cleaning in the ruck.

"We were getting taken out at least two or three metres past the ruck and that gave them the impetus to keep coming at us."

While the Irish coach has some grounds for grievances, his players inability to react to a clear interpretation is a concern.

A close look at Angus Gardner's communication with players throughout the game paints a clear picture of his expectations. The Australian referee was in constant contact with the defending team.

After just two minutes, he was in contact with Rory Best as he attempted a jackal. 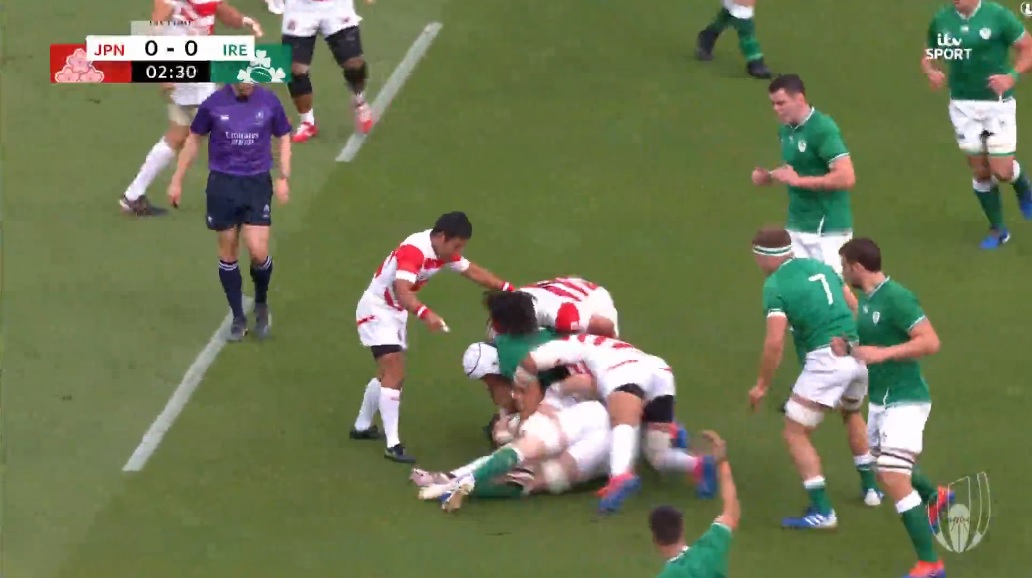 In the fifth minute, he penalised Peter O'Mahony for an attempted jackal. 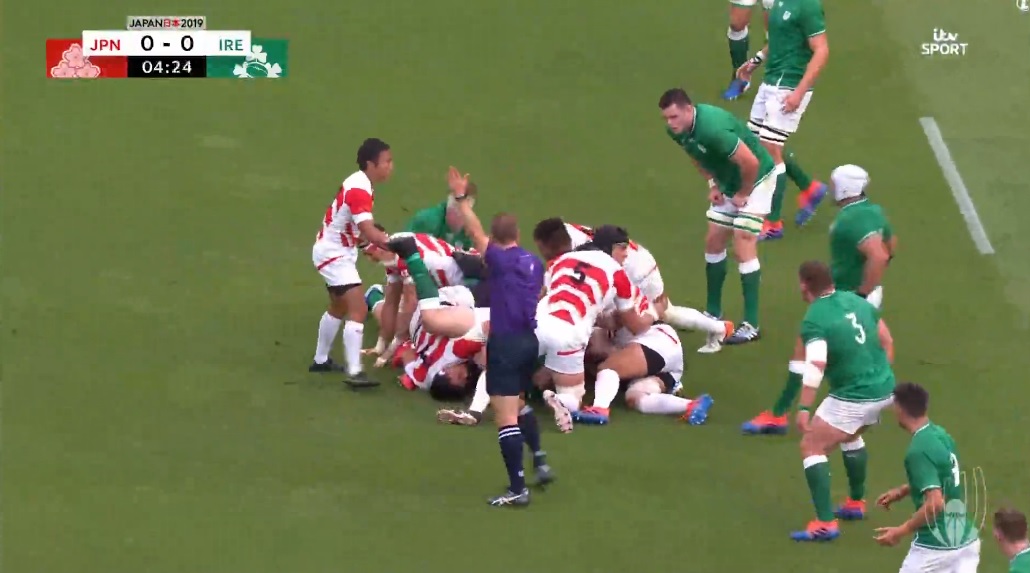 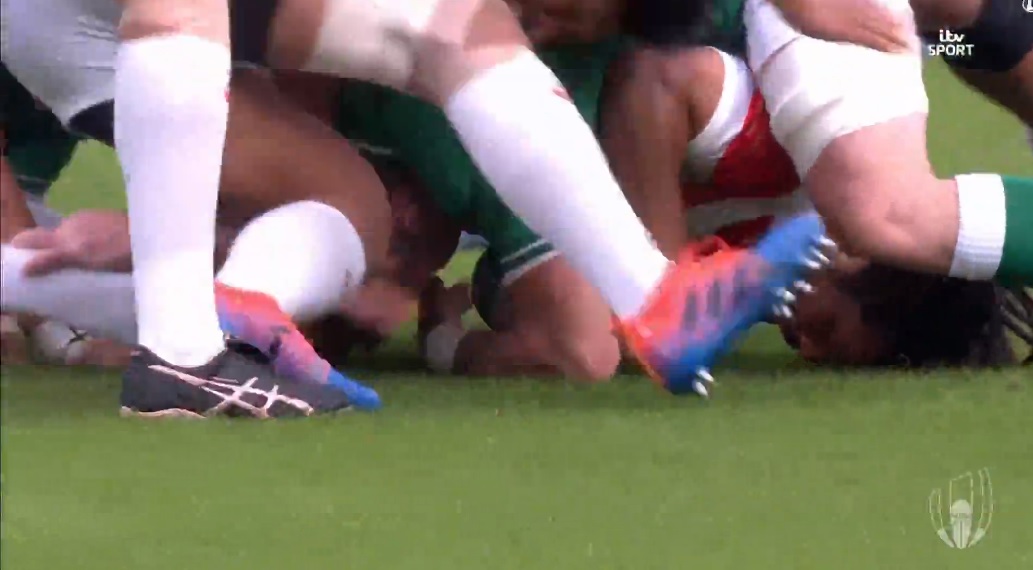 After seven minutes, he awarded Ireland a penalty and spoke to Peter O'Mahony again. 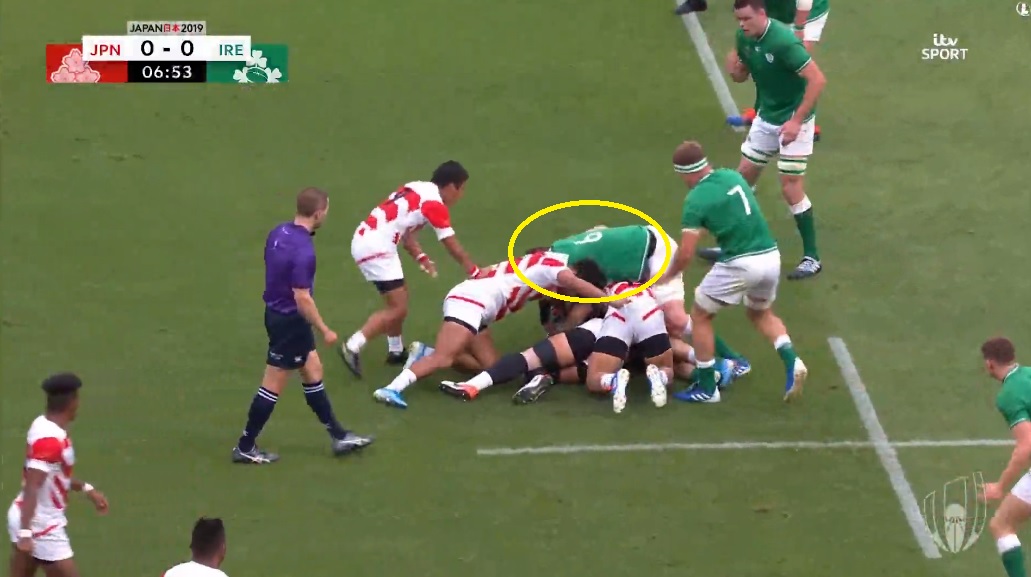 "That is the picture I need to see." 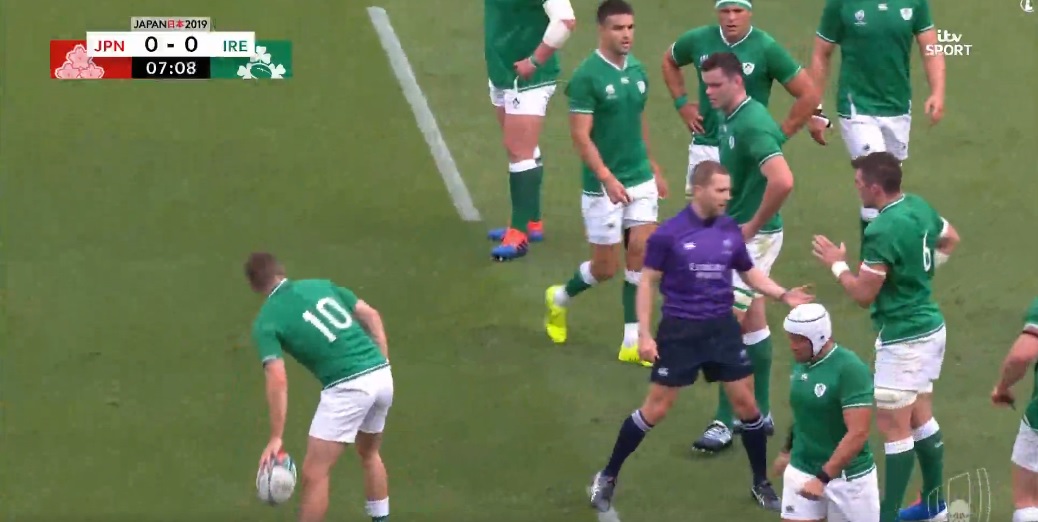 Both of Ireland's tries come after he has given them advantage due to an infringement at the breakdown.

"Advantage! You are slowing it down." 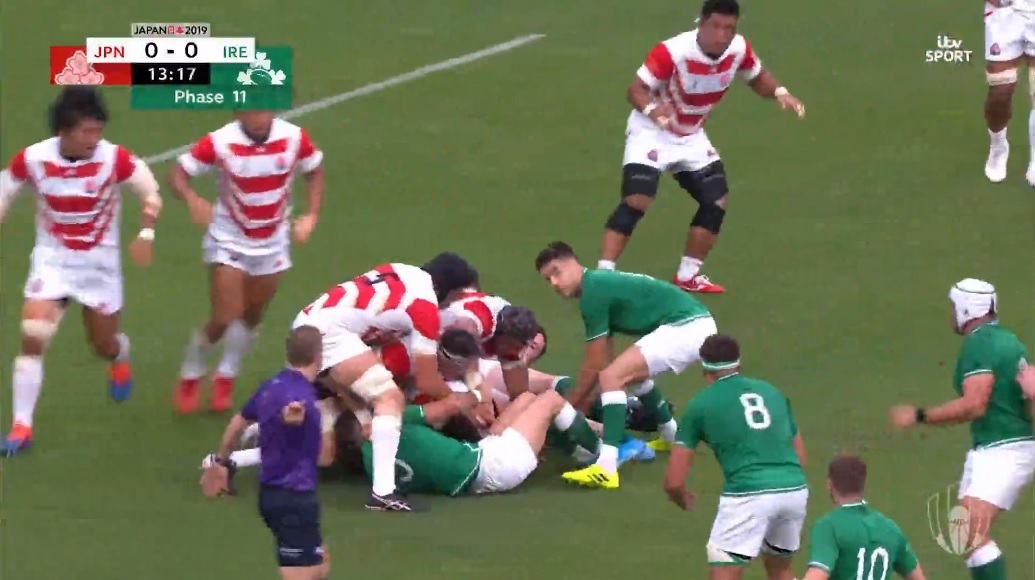 Gardner tends to lean towards the attacking team. In the 21st minute, Ireland benefitted again.

James Ryan makes a carry and is tackled by Luke Thompson. CJ Standers comes in to clear the ruck. Note Thompson trying to work his way out. 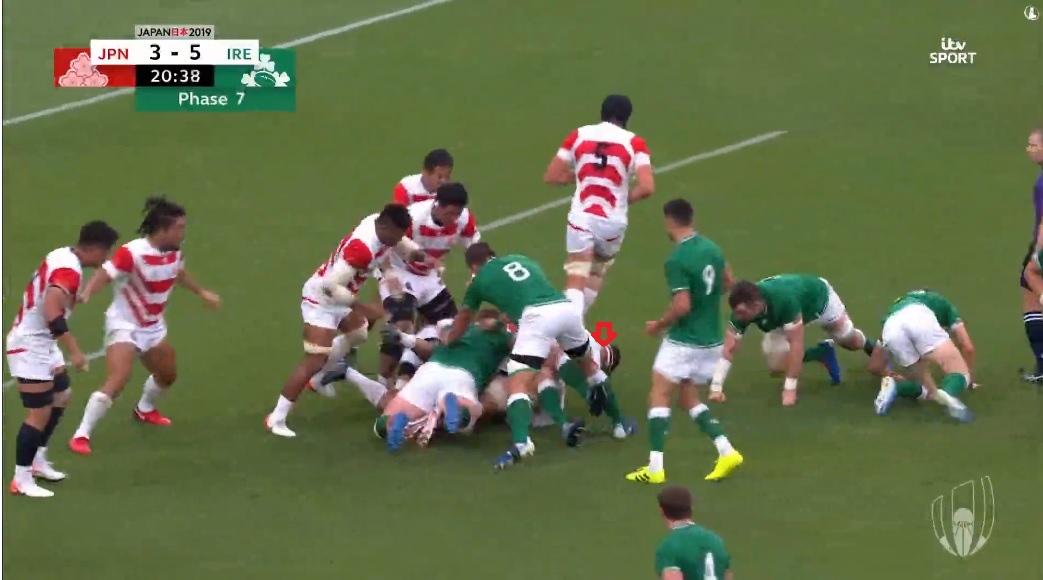 Stander strategically drops a knee and pins the lock in the way. Murray appeals. 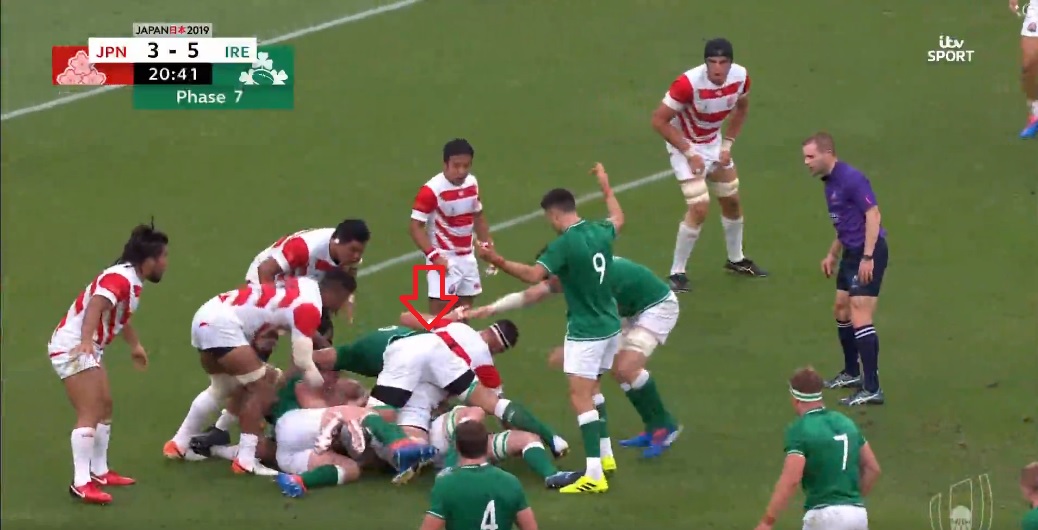 "Move four... advantage!" Ireland then try a kick and score a try. 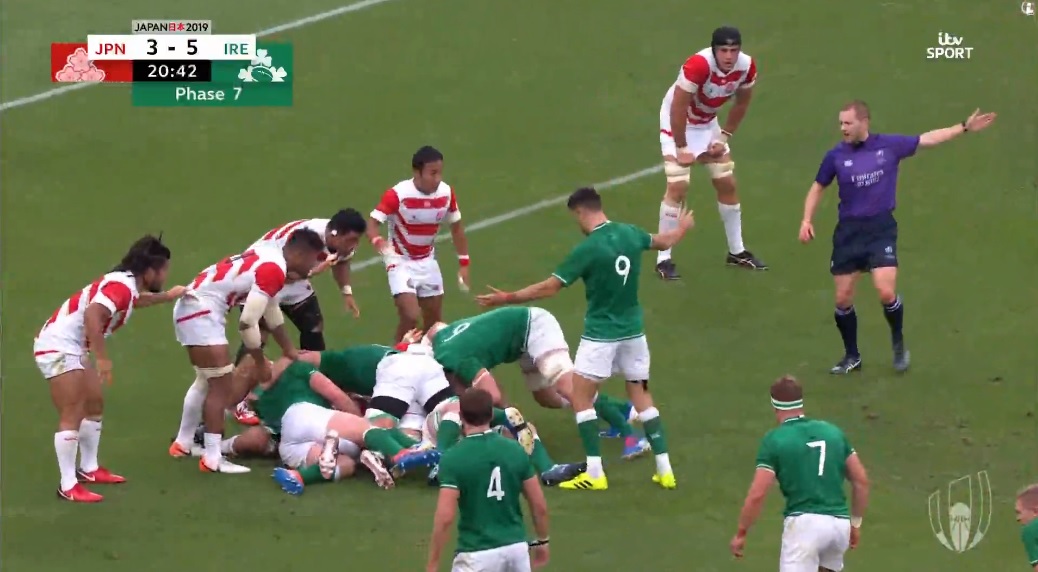 Every referee has preferences and tendencies.

His interpretation is clear. Unless a jackal is textbook, with the player supporting their body weight and in before a ruck has formed, he will penalise them.

Generally, Ireland's tactic of relying on their defence has stood them in good stead. They have strong line speed, immaculate discipline and a good kick game. But, circumstances were different in this encounter.

The heat and humidity of Shizuoka Stadium altered standard practise.

Defence was draining. The conditions were sweltering. The referee was fixated on the defending team and therefore less attentive to clearouts. Every available advantage lends itself towards the attacking team.

Despite this, Ireland failed to dominate possession, finishing with 49%, and gifted up countless counter-attacking opportunities. On top of that, apart from the second try, they did not play the referee.

Before the 2011 Rugby World Cup, New Zealand were said to have done an exercise on a whiteboard with two circles; 'Can Control' versus 'Can't Control'. The Referee was put in the can't control.

Then they added a third circle; 'Can Influence.' The ref was moved into that category.

Ireland's second try came on a penalty advantage. It was cynical and clever play. But they don't try it again, don't adapt to the in-game circumstances and don't react to the officiating.

Before half-time, Ireland concede another penalty for an attempted jackal. In other games, Murray might get away with this body position but not on Saturday. 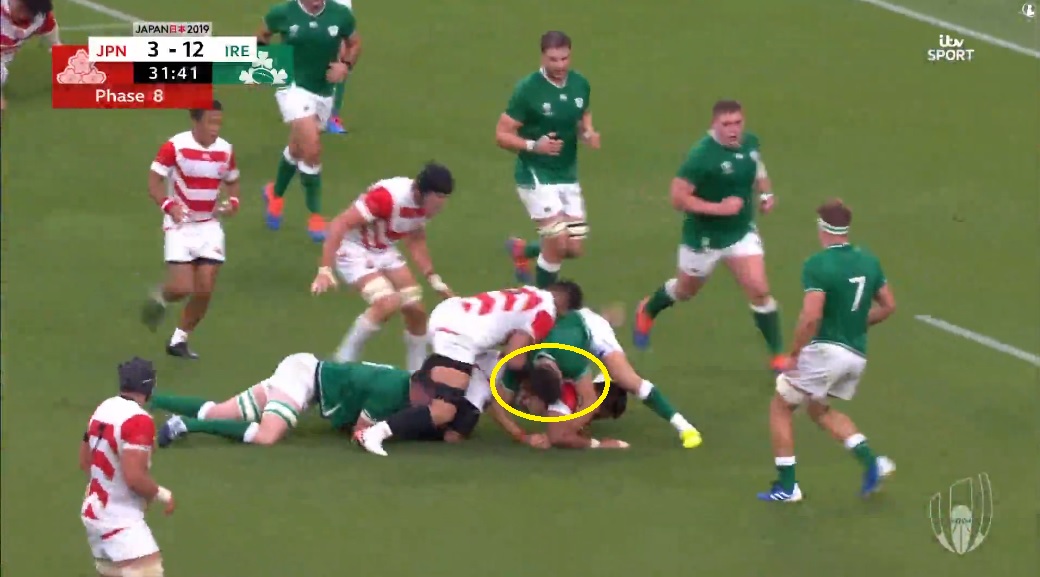 One issue here is consistency, Gardner warns Conor Murray and Murray responds by pulling his hands away but a penalty is given anyway. In the second half, a similar situation occurs but no penalty is given.

"No seven! No." Murray has already been impeded but plays goes on. 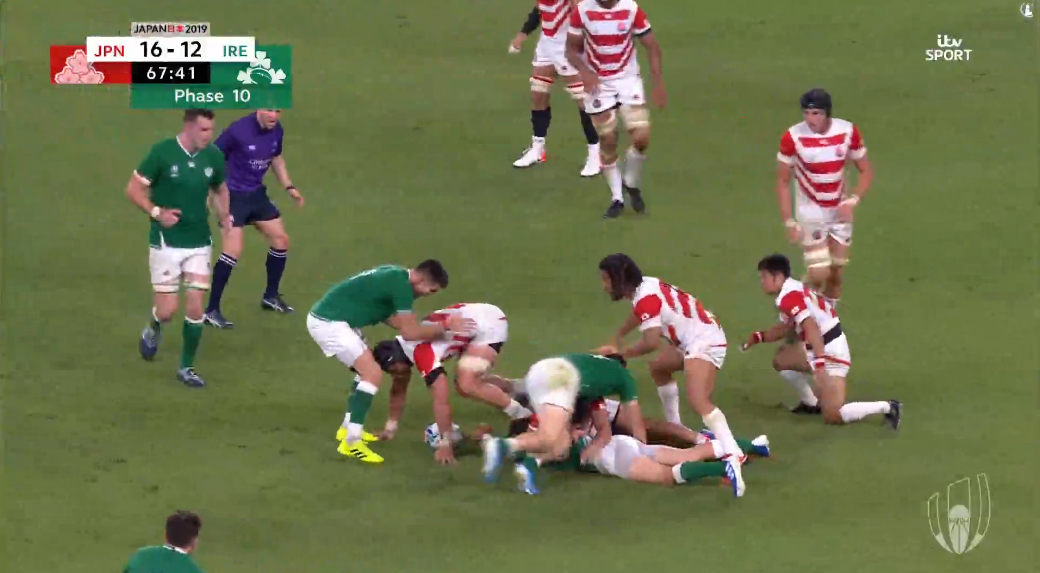 By the time Ireland concede another penalty for an attempted jackal, the referee has had enough and tells captain Rory Best as much.

"Rory! Mate, that is a couple of times. Six, when he shows me a good picture he will get his reward. When he doesn't, I'm not having it." 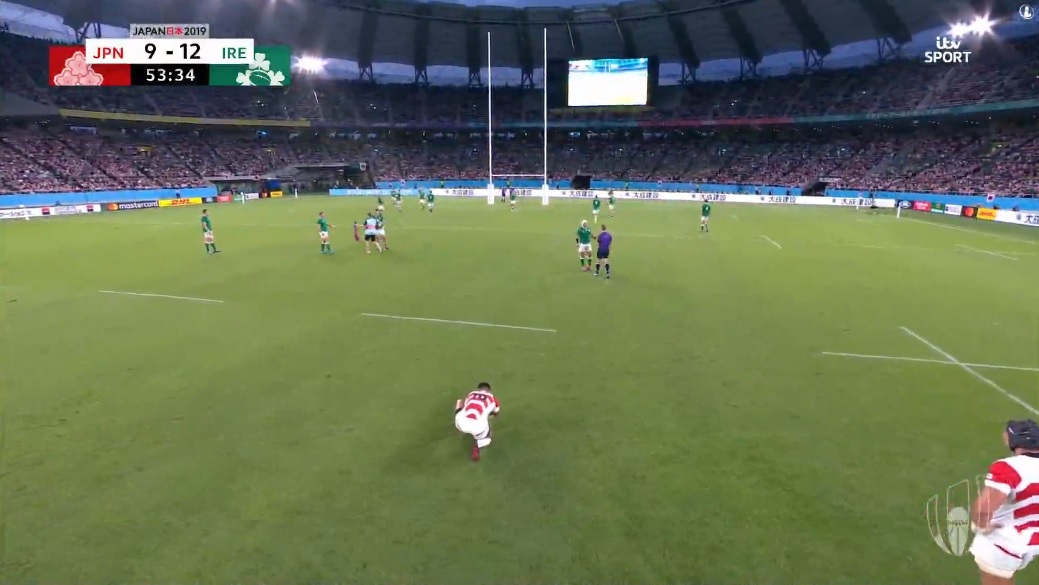 Meanwhile, under Jamie Joseph and Tony Brown, Japan are also well-coached, clever and clinical. They recognise the breakdown interpretation and pin Josh van der Flier to win a penalty. 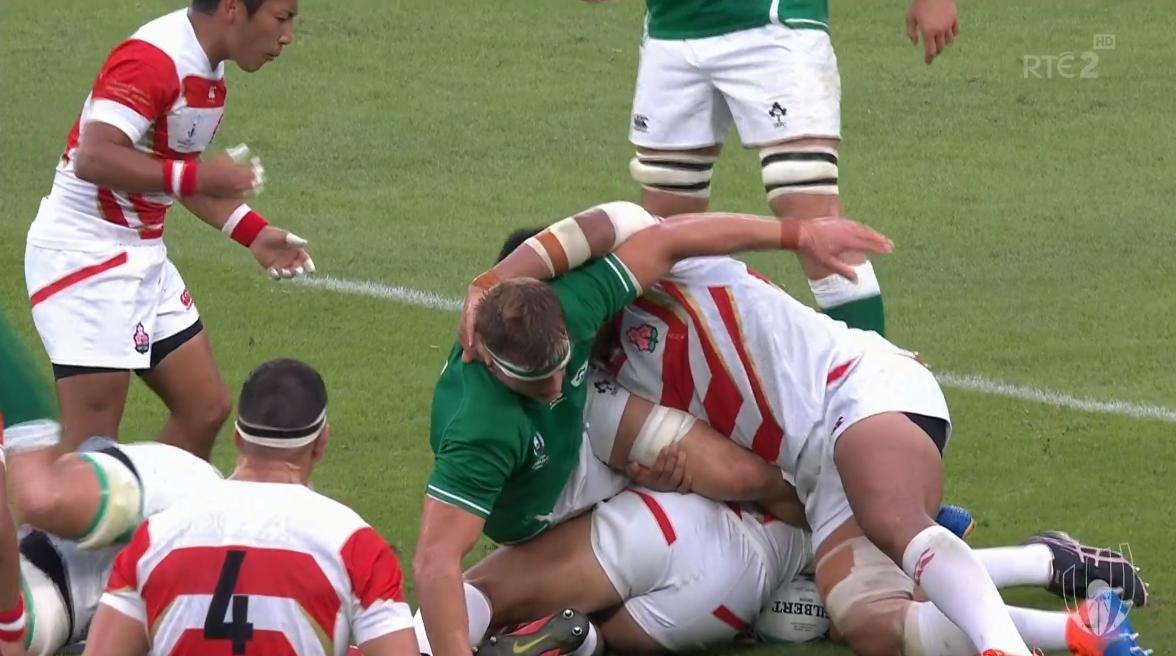 A man who had a major impact when he came on was Michael Leitch. This should not come as a big surprise. Speaking at the Balls.ie World Cup preview event, Leinster lock Scott Fardy cited him as a key figure.

I think Michael Leitch is one most underrated players in world rugby. To me, he is the best six running around in rugby at the minute. He is the most complete backrower I have played against.

Here he makes an attacking run, gets an offload off and bounces back up to in time to clean the resulting ruck. However, he does come in off his feet and would be penalised in different circumstances.

Later in the game, James Ryan appeals to the referee about Japan going off their feet. 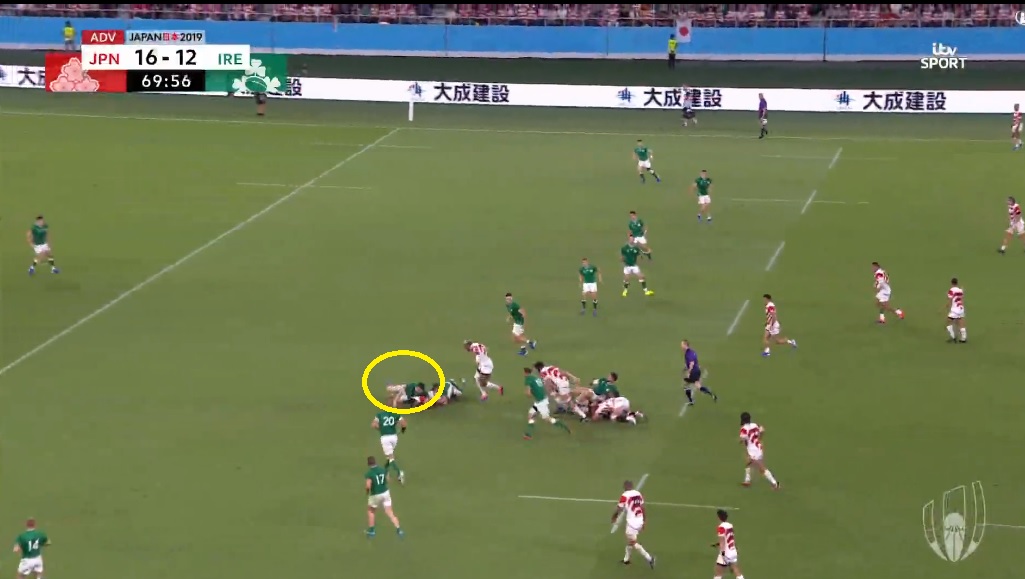 Nakajima comes straight off his feet while Japan already have an advantage. 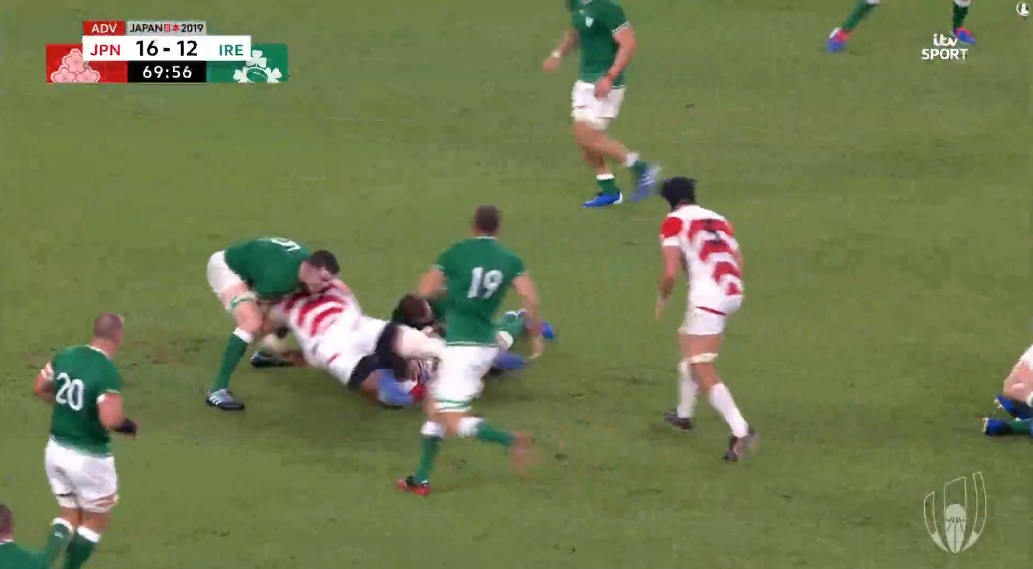 Ryan calls out and gestures with his hand, but the attack continues. 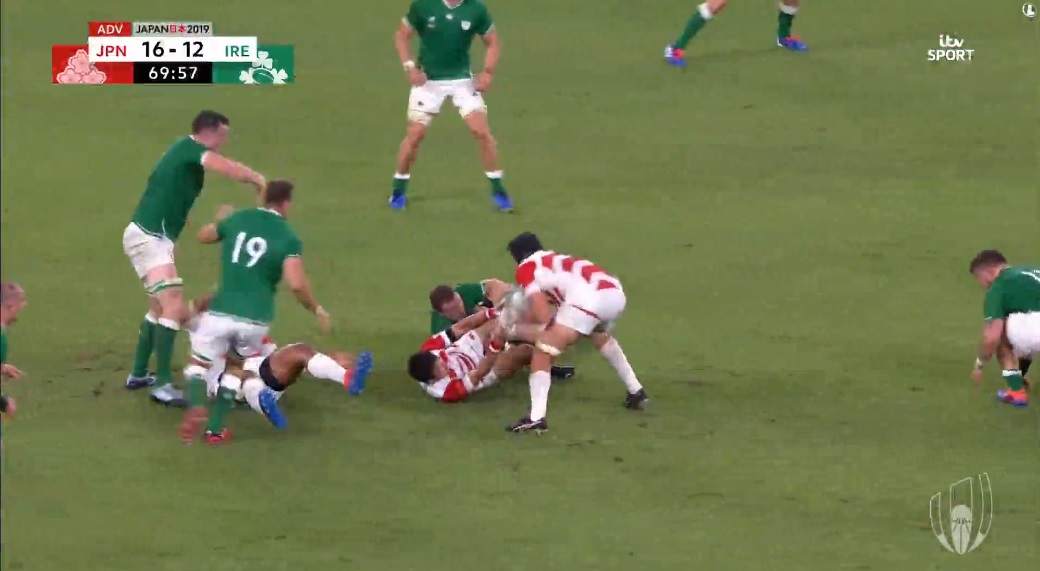 In these conditions, Ireland needed to keep ball in hand, grind it down and choke them out. Instead, they kicked loosely whereas Japan kicked in a bid to retain possession.

There was one particularly telling passage of play early in the second half that demonstrated all of Ireland's failings.

Japan try to exit from their own '22 but Keith Earls makes the read. 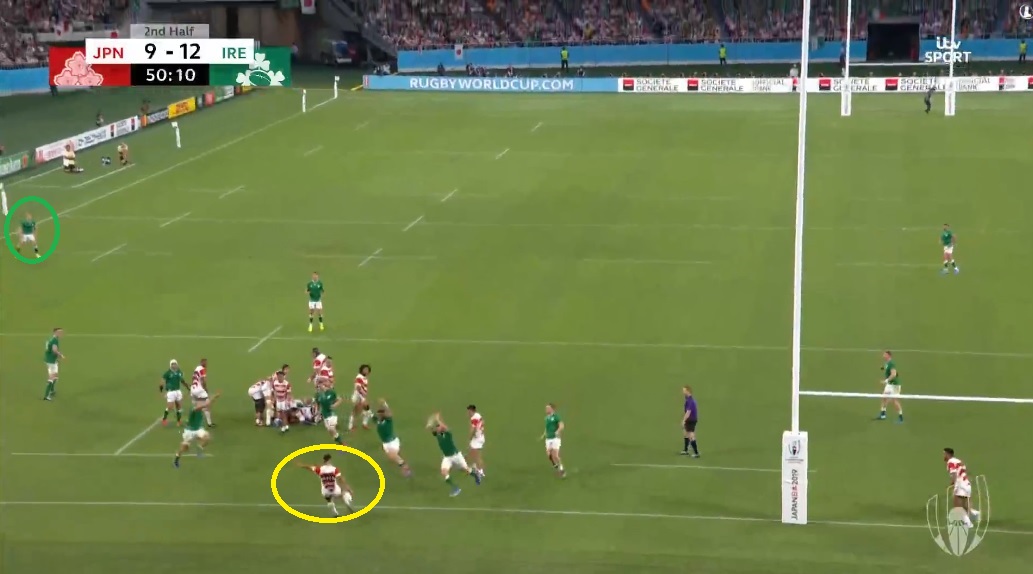 The Irish winger keeps it in play and Ireland attack. 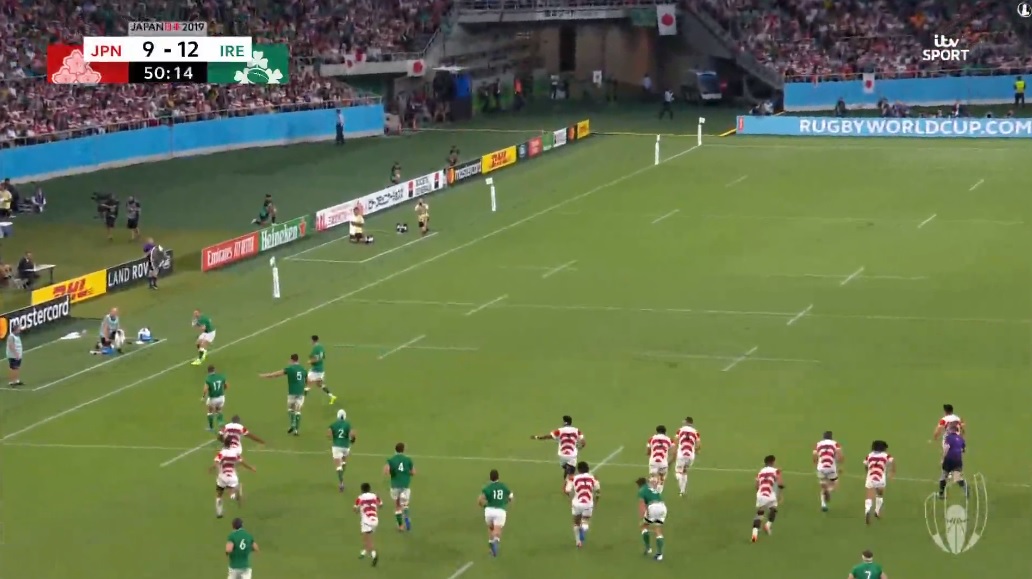 After two phases, Peter O'Mahony kicks down the wing. 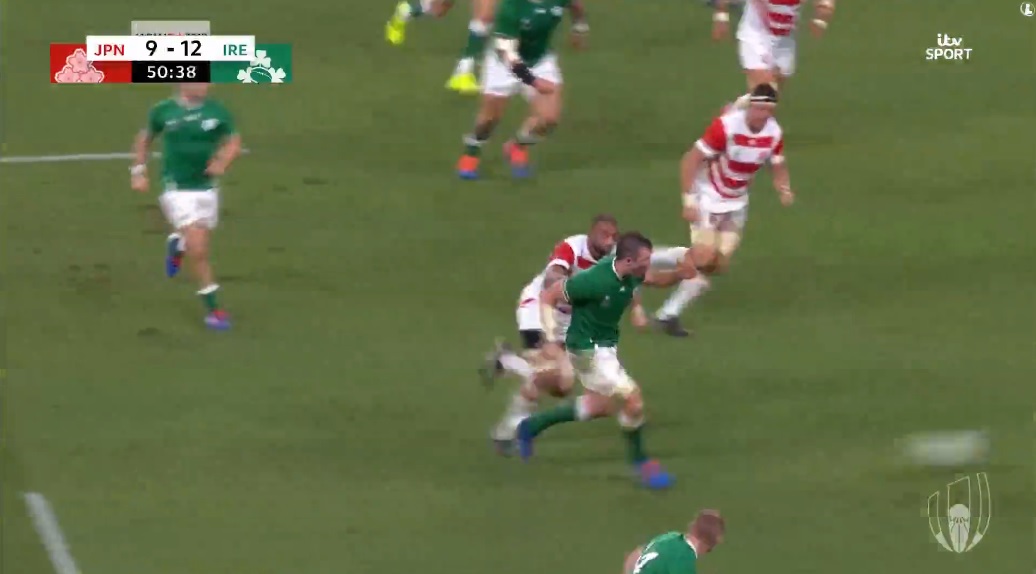 The kick is long and the chase is poor. Japan run it back and counterattack. 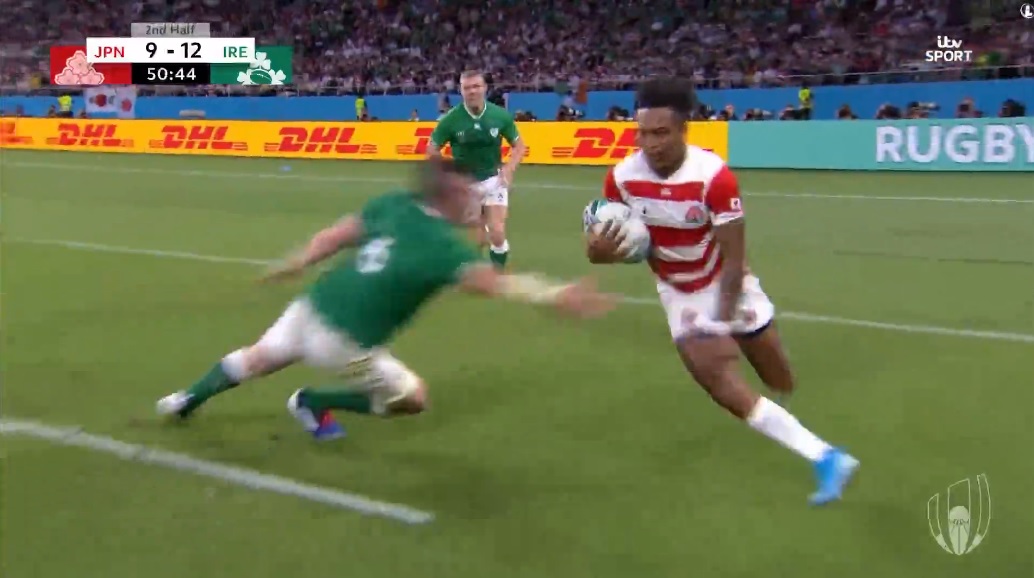 Matsushima is isolated so kicks the ball deep and gives Ireland another chance to attack. 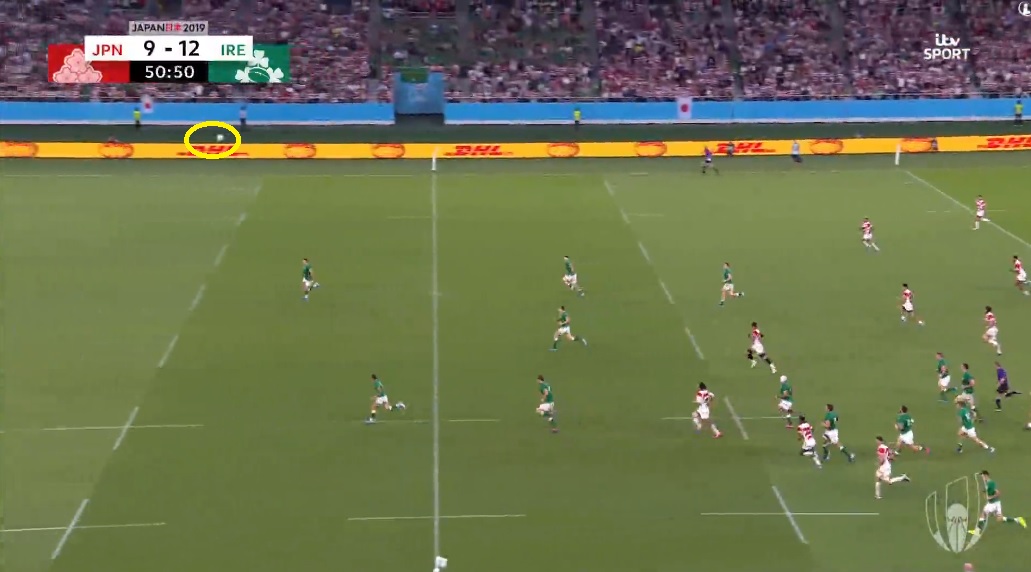 After five phases, Carty kicks. This kick is worse. It is not contestable or accurate and Japan claim it clean inside their own '22. 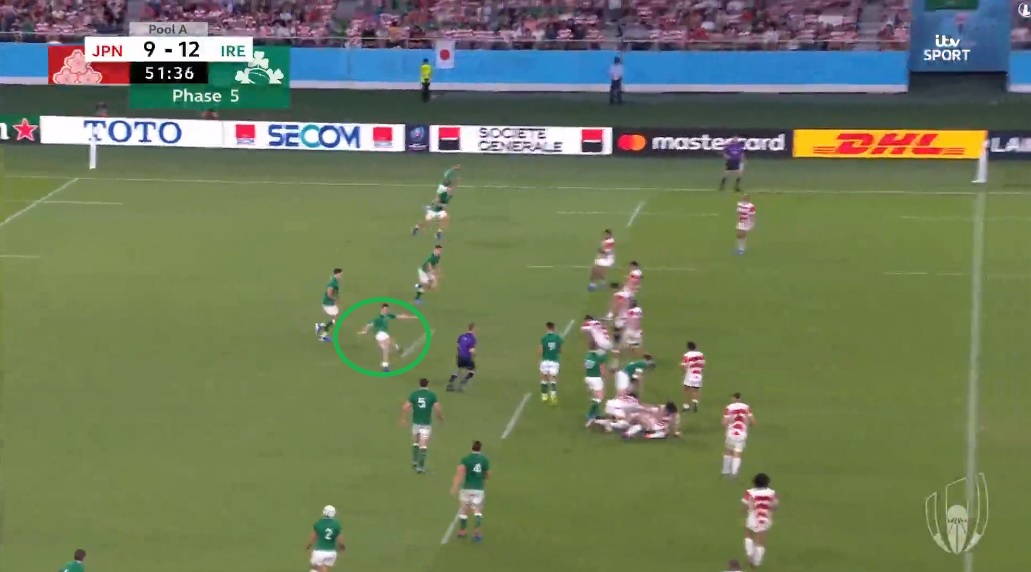 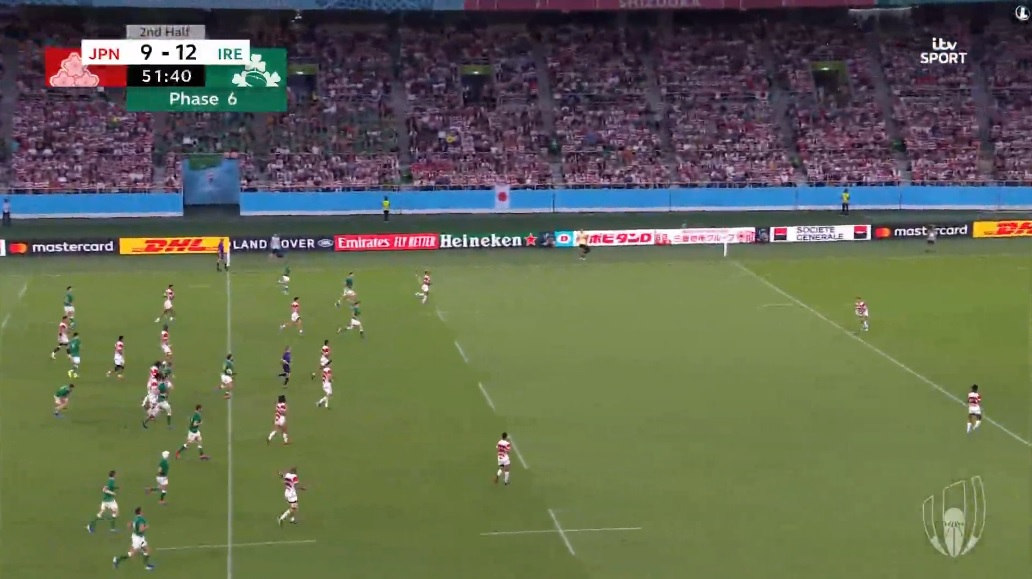 They run it back and respond with a contestable box-kick to move up the field and retain possession. 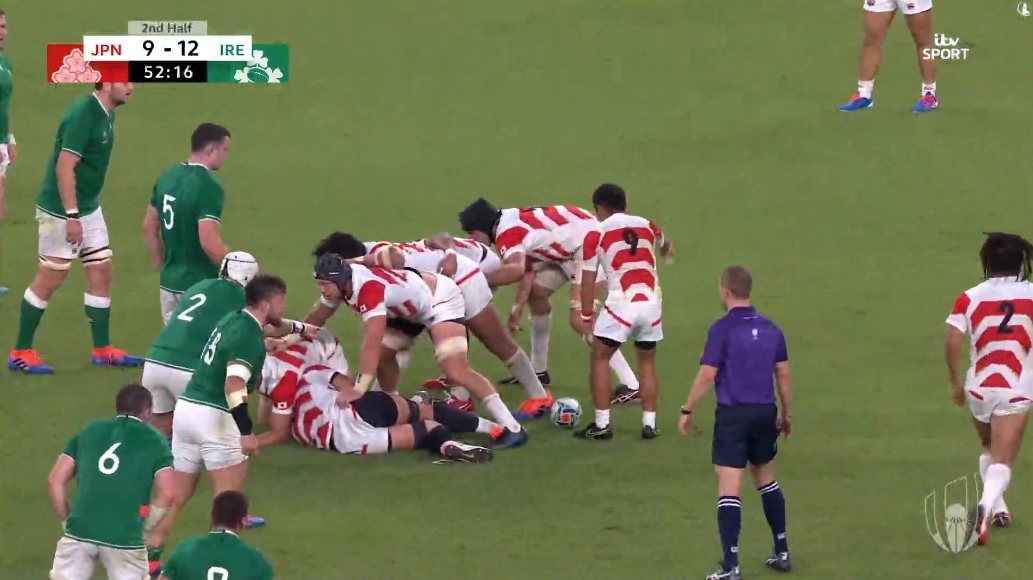 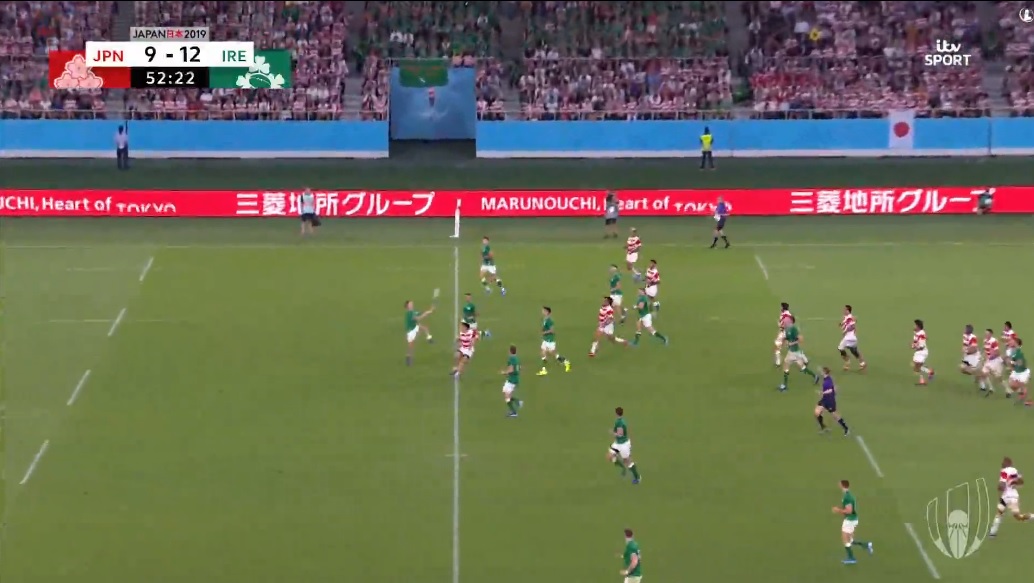 A phase later, Ireland concede a penalty for going off their feet in the ruck and Japan get a chance to kick at goal. 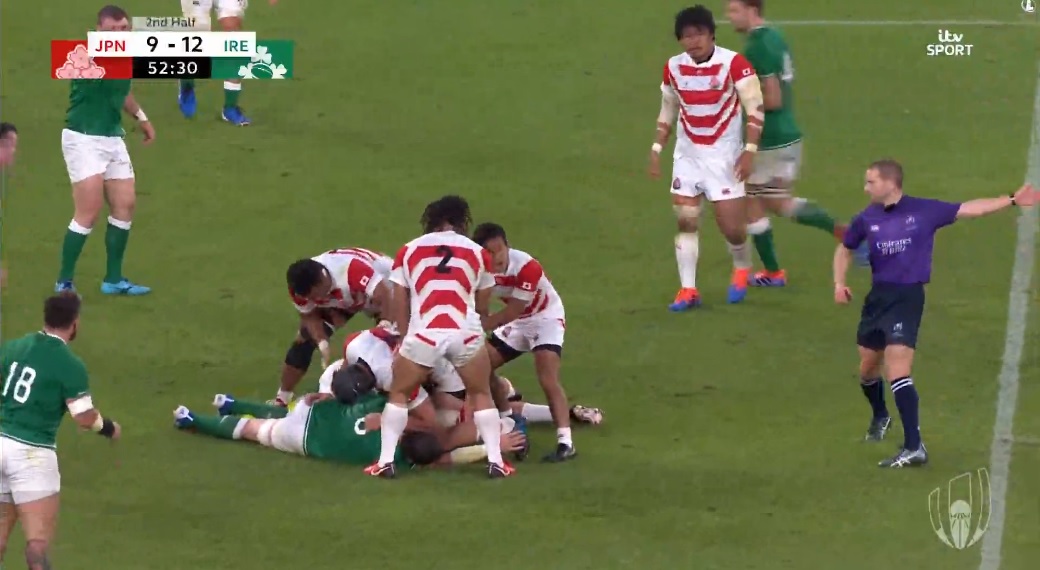 It was not only a lack of accuracy but adaptability. Whether it be New Zealand's cross-field kicks against South Africa or Wales insightful defensive system against Australia, across this tournament teams have been rewarded for in-game intelligence. On Saturday, Ireland demonstrated little of it.