If this season has taught us anything, it's that Ireland are still producing quality rugby players. When youth are finally given a chance they can produce exciting, winning rugby. Just from last year's U-20 class, players like Conan O'Donnell, Stephen Fitzgerald, Ross Byrne, and Garry Ringrose have made their Pro 12 debuts this season - while others who were playing U-20 rugby in the last three years - Ross Molony, Rory Scholes, Sean O'Brien (Connacht), and Rory Scannell are starting to make an impact.

One main factor about all of those players is that their talents were evident to those watching when they were playing for the Ireland U-20s. The same is true of this year's class of players. There are at least nine players this year that we should be watching out for in the future, while others in the squad will be hoping to learn from this experience to hopefully make the most of their professional careers. In fact, three members of Carolan's 30 man squad feature in our Ireland World Cup 2019 squad.

Here is everything you need to know about the 2016 Ireland U-20s, and who to watch out for in particular. 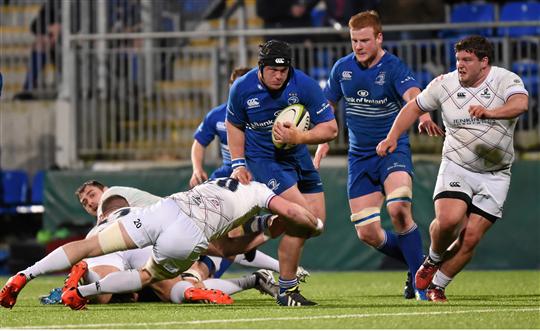 Unusually for Ireland, there are only four players returning this year who have U-20 Six Nations experience. Equally unusually, three of those players are in the front row. It won't surprise you to learn that all three are among those I'm tipping to have big futures.

Loosehead prop Andrew Porter could be a generational player. The best way is Healy-esque without the impression he needs to smash his head through windows. Aside from Porter's questionable haircuts last season, the St. Andrew's loosehead was among the standouts, and is listed as the player to watch from Ireland. The only thing standing in his way for the future are the long list of loosehead props in Leinster under the age of 30 - Cian Healy, Jack McGrath, Ed Byrne, Peter Dooley, and Jeremy Loughman. He'll be backed up by another St. Michael's College representative in James Bollard, who will be looking to provide a big impact in the loose when he comes on after 60 minutes. Bollard was a surprising call over Leinster prop Vakhtang Abdaladze. Both Porter and tighthead O'Donnell feature in our "6 Irish players who impressed in last year's U-20 World Cup"

Ireland's tighthead's both come from Connacht, and both have huge potential. That's where the similarities lie however, as Conan O'Donnell and Conor Kenny are very different players. O'Donnell plays with a maturity and experience of a 35-year-old, incredibly strong and technically brilliant in the scrum, and can offer value at the breakdown. Kenny however is more likely to be seen around the park - both in terms of impressive carries, and a tendency to give away some penalties. 19-year-old O'Donnell already has eight caps for the Connacht senior team. Rodney Ah You's departure to Ulster is sure to benefit both O'Donnell and Kenny. Munster's Ben Betts is unlucky to miss out, but would be the next choice up should there be any injuries.

There aren't too many hookers who play two years of U-20 rugby for Ireland. In fact, Ireland are so bad at producing hookers, that we have yet to produce a single international hooker from U-20 rugby. The last international hooker to come through the age-grades was the sub hooker on Ireland's U-21 side in 2006 - Sean Cronin. The best hookers that have played underage rugby for Ireland since - George McGuigan, Zach McCall, and Niall Annett don't even play their rugby in any of the four provinces anymore. Of the 20 U-20 hookers that Ireland have had, only five still play with the provinces - Sean McNulty (2015, Leinster), Shane Delahunt (2014, Connacht), Niall Scannell (2012, Munster), Duncan Casey (2010, Munster), and Jason Harris-Wright (2008, Connacht). Ulster's Adam McBurney and Munster's Shane Fenton have a lot to live up to. In fact, starter McBurney seems to have come from nowhere to be a two-time U-20 international, surplanting Shane Fenton who has been with this team since the U-18s, and has already  made appearances for Munster A.

See Also: 6 Irish Players Who Impressed In The 2015 World Rugby U20 Championship 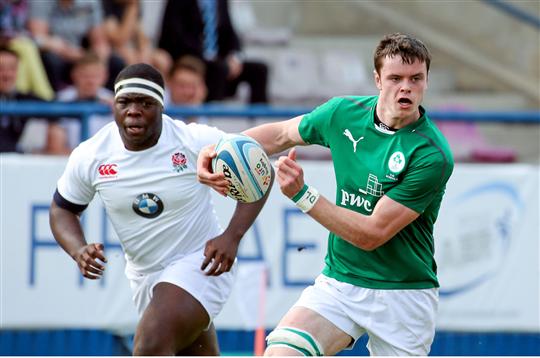 The brightest talent in the squad could well be James Ryan. The lock is the fourth captain of the U-20's in a row from St. Michael's College after Luke McGrath, Dan Leavy, and Nick McCarthy - and he possibly has the highest potential of them all.

Ryan is so highly thought of, that he was included in a XV to watch in 2014 that included the likes of already professional CJ Stander and Stuart Olding - despite still being in school.

There are two similar second rows to watch out for this February and March - because England's Maro Itoje is blazing the trail for Ryan to follow.

He's likely to be joined in the second row by Munster's Sean O'Connor, with Connacht pair Peter Claffey and Cillian Gallagher fighting for the bench spot. U-19 Gallagher is a lineout technican, while Claffey has the ability and versatility to play at blindside flanker if needed.

Both Ulster's Hugh Sloan, and 7s star Michael Melia would be next in line if there were any injuries. 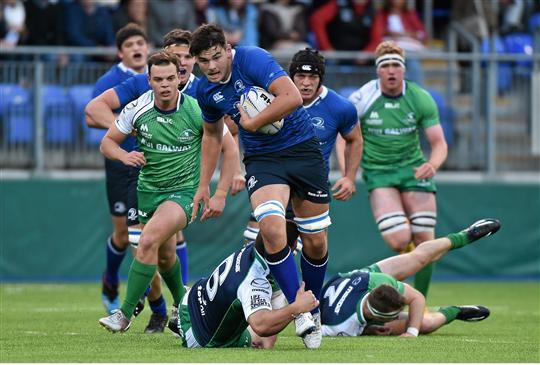 It's quite a competitive back-row yet again for Ireland, such that the likes of Sligo's Mathew Cosgrove, Neil Reilly, and Conall Boomer weren't included.

The third and final St. Michael's representative, No. 8 Max Deegan beats out last year's Leinster schools cup star Dan Trayers to the squad, and Deegan will be joined in the squad by three Munster backrowers. It's a positive change at this level for Munster. It's hard to pick out the starters from this bunch apart from Deegan.

Will Connors is an impressive groundhog from Clongowes and is comfortable at both 6 and 7; U-19 No.8 John Foley has the chemistry with flanker/ No.8 Kelvin Browne from playing together with Shannon; Greg Jones was part of St. Andrew's best schools team in a long long time. Daniel Walsh will be competing with Connors for a spot on the openside. 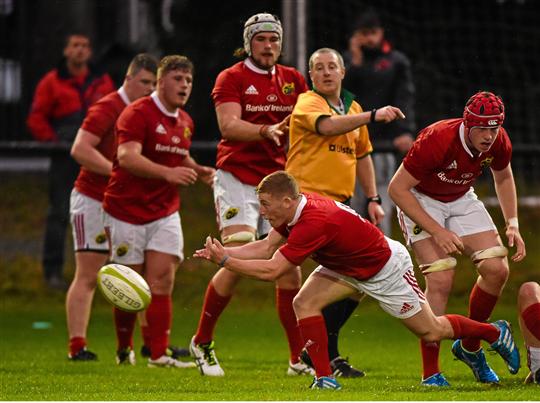 Both Connacht's Stephen Kerins and Munster's John Poland are above average height and weight for a scrumhalf. Poland in particular is more a Conor Murray type, than a Peter Stringer. My hunch is that Poland will begin the tournament with the start, but Kerins isn't one to dismiss. Kerins is one of three Sligo RFC representatives in the squad, which is the most from any one club.

Probably the most exciting outhalf from this year's age-group won't make his debut until the World Cup. Munster academy flyhalf Bill Johnston is already making waves as an 18-year-old, and one for Munster fans to pin their hopes on. Unfortunately he's injured at the moment. The U-19 outhalf from last year, Matthew Gilsenan isn't included, which means that Ulster's U-19 Johnny McPhillips is the leading candidates to start over centre/outhalf Jimmy O'Brien and fullback/outhalf Brett Connon. McPhillips was a special mention in Rugby World's Schools Team of the Year in 2014, which also featured injured U-20 centre Sam Arnold and Gilsenan. McPhillips is another who starred at full-back in schools in England but seems to be being converted to outhalf in the Ulster academy.

Connon comes from the Newcastle Falcons, and judging by this video, is capable of breaking the line from both 10 or 15, has a big cultured boot and is not afraid to show off his breakdown abilities:

The other standout centre from last year - Ulster's Sam Arnold is both injured and needed by his province this season with the likes of Luke Marshall, Stuart McCloskey, and Jared Payne being called up internationally. Hopefully we will see Arnold later in the tournament, but there is some talent behind him.

Paul Kiernan is the latest in a long line of exciting Munster prospects. 'Chippy' is one player in the squad I haven't seen, but have probably heard the most about. He joins O'Gara, Earls, Hanrahan, and Stephen Fitzgerald as well-hyped Munster back prospects. Kiernan should be the starting 12, but can play at 13 too. He's got quick hands, and almost ducks under the line when he makes a break. He's been the standout for UCC all year, will be one I will be eagerly watching.

He could be joined by promising utility back Jacob Stockdale - who was a winger for the 20's last year, or tricky back Jack Power - who is also comfortable as a full-back. Both Ulster academy back Stockdale and Power are two players that will start - the only question is where. Both are special talents, with Stockdale's finishing in particular an asset to this side.

Jimmy O'Brien, fellow Leinster outside centre/outhalf Conor O'Brien, and Munster's Shane Daly are the other centre options to watch. 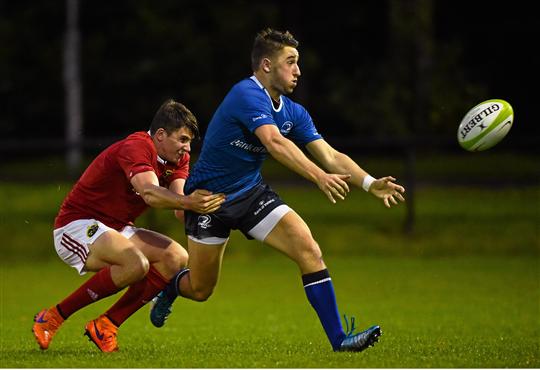 Jack Power is most likely to be used at full-back, where he could have competition from Connon. The players versatility makes predicting the backs much more difficult.

Power was part of the U19s 7s team along with speedster Terry Kennedy. It's those sort of experiences that suggest how much skill and pace a player has, and by all accounts Kennedy is an absolute flier. He has Terenure's Matthew Byrne and Hugo Keenan as competition for a wing spot with the exciting Ulster U-19 back Rob Lyttle.

Rugby
6 hours ago
By Luke Delaney
Quiz: Can You Name Every Leinster Player To Score A European Cup Final Try?
Rugby
1 day ago
By Eoin Harrington
Ronan O'Gara Says Lions Rejection Has Pushed Johnny Sexton
Rugby
2 days ago
By Colman Stanley
The Lowdown On An Incredible Few Days For Irish 7s Rugby
Previous Next