It was always going to be tough going for Ireland U20s at the World Rugby U20 Championship this year.

Last year's difficulties, which saw them finish 11th out of 12 teams, meant Noel McNamara's side were drawn into a pool alongside Australia, England and Italy.

The boys in green started off the tournament by coming from ten points down to record a 16-point victory over England to reassert their position as the premier team in Europe at U20 level but the second game was not so kind.

Ryan Baird was shown a red card just 20 minutes into their clash with Australia, leaving Ireland U20s to fight with 14 men for most of the game on their way to a 45-17 defeat at the hands of the Junior Wallabies.

That result leaves this young Irish side needing a good deal of good luck in the final round of games on Wednesday if they are to make it to the top tier of the knockout stages.

How do the playoffs work?

With 12 teams split into three groups of four, the second round of the tournament see the competition broken down into three separate playoff series to determine every team's final position.

Teams are ranked according to how many points they take in the pool stages, with three separate knockout stages determining each team's final position.

The three pool winners are joined by the best second-placed team in the final playoffs, with a chance to be crowned world champions at the end of it all.

The two remaining runners up and the two best third-placed teams will head into the 5th-8th place playoff deciders, while the worst-ranked third place team will face off against the three bottom sides to see who finishes 9th-12th, with the bottom team relegated down to next year's World Rugby U20 Trophy.

So how can Ireland U20s qualify for the final?

At the moment, this is how things stand: 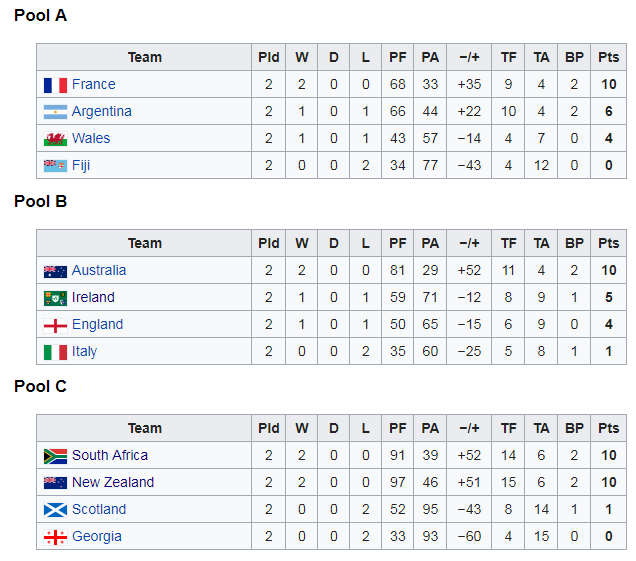 With the defeat to Australia giving the Junior Wallabies the advantage in the head-to-head should the two sides be level on points at the end of the pool, Ireland U20s can only reach the final four as the best runner-up.

First and foremost, they need to beat Italy in their final group game and run up the score as much as they can. Anything other than a comfortable win in which they pick up a try bonus point makes qualification for the final playoff impossible.

But even with a big win over Italy, Ireland U20s need a lot of help. At the moment, they are ranked third out of the three second-placed teams. 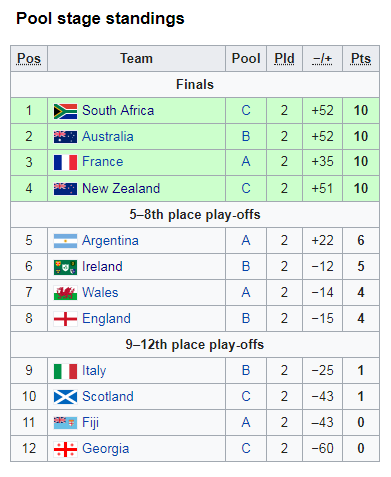 Defending champions France look likely to do Ireland U20s a favour in the final round by beating hosts Argentina, which would eliminate the South Americans from the hunt for a top four spot.

But it's in the battle for Pool C where Ireland's prospects grow grim.

New Zealand and South Africa will face off to determine who tops the final pool. With both teams already taking a maximum 10 points from their opening two games, Ireland U20s need whoever wins that game to do so convincingly, denying the loser a bonus point of any kind - either a losing one or a four-try bonus - as even one extra point would take them out of Ireland's reach.

Ireland U20s would need a huge points swing in their favour should they manage to tie either of two southern hemisphere giants on ten points.

South Africa's points difference is superior to Ireland's by 64 points, with New Zealand 63 points better off than Noel McNamara's side heading into the final round.

So can it be done?

There's a slim chance but it seems unlikely. While France are favoured to stop Argentina in their tracks and Ireland U20s have already proven this year they can pick up a try bonus point while beating Italy, they still need New Zealand or South Africa to lose by more than seven points, score fewer than four tries in the process and suffer a hefty defeat.

All hope is not lost though. Australia laid the template for such a result earlier this year when they thrashed New Zealand 24-0 in the Oceania Cup last month.

A similar result would still require Ireland to run up the score by 40 points against a tricky Italian side. Ireland U20s beat the Italians by 20 points on their own soil during this year's Six Nations but they would have to hit new heights to double that score.

With the Junior All-Blacks and Baby Boks amassing 29 tries between them at the tournament so far, there is the potential for one side to run up the score on Wednesday. But equally, it seems unlikely either side will leave the game without at least one bonus point in their pocket.

As it stands, all signs point to Pool C's top dogs finishing in the top four at the end of the day, with Ireland left to battle it out in the 5th-8th place playoffs.

But this Irish side have overturned the odds before.

The Rewind
13 hours ago
By Gary Connaughton
Watch: Piers Morgan And Rudy Giuliani Tear Strips Off Each Other On Live TV