Ireland vs Japan: Match Preview And How To Watch

Ireland kick off their autumn test series this weekend when they host Japan at the Aviva Stadium. The two nations faced each other only in the summer with Ireland winning 39-31 in an exciting encounter. However Japan's 19-12 victory at the 2019 World Cup looms large in the memories of this fixture. Japan are an exciting team to watch and pose a tough challenge for Ireland. Here's a match preview and information on how to watch Ireland vs Japan.

When is Ireland vs Japan

Ireland vs Japan is on Saturday, 6th November. Kick-off at the Aviva Stadium is at 1pm.

How to watch Ireland vs Japan

The match is live on RTÉ 2 with coverage starting from 12pm.

Ireland vs Japan is also live on Channel 4 with their coverage starting at 12:30pm.

As mentioned above, Ireland won the last meeting between these sides in the summer. It was a fairly good day for Andy Farrell's men but they still got caught out defensively on a few occasions. Japan thrived off of Ireland's mistakes and their high-tempo, offload heavy attack cut Ireland open on a couple of occasions. All in all, however it was a decent outing for Ireland. They scored five tries and took the win with a fairly inexperienced side. Many of the players that day hadn't played with each other before. This Ireland squad are aware of the dangers when facing Japan.

Jonathan Sexton is in line to make his 100th cap for Ireland as he's starting at 10. James Lowe gets the start on the wing along with Andrew Conway while Keith Earls starts on the bench. Tadhg Beirne slots into second row beside James Ryan as Iain Henderson dropped to the subs. Lastly, Dan Sheehan could be in line for a debut as the Leinster hooker starts on the bench.

Japan come into this match after losing 32-21 to Australia on October 23rd in Oita, Japan. The result may have gone against them but they looked quite impressive in defeat. Their line speed and intensity in defence restricted the Wallabies at times while their attack was good as well but not consistently enough. They showed yet again that they could hang with the big boys in the top tier of international rugby.

Introducing our members for Saturday's clash against Ireland ☘️🇯🇵

There's a few familiar names in this starting line-up from the 2019 World Cup as Pieter Labuschagne captains the Brave Blossoms. Yu Tamura returns to start at 10 after being a sub last time out against Australia. Lastly, Clermont's Kotaro Matsushima starts at fullback for this match and will be looking to show off some of his blistering pace that caught the eye of many fans two years ago.

This match-up has provided some memorable moments in recent time but let's hope this time it will be another Irish win to remember. 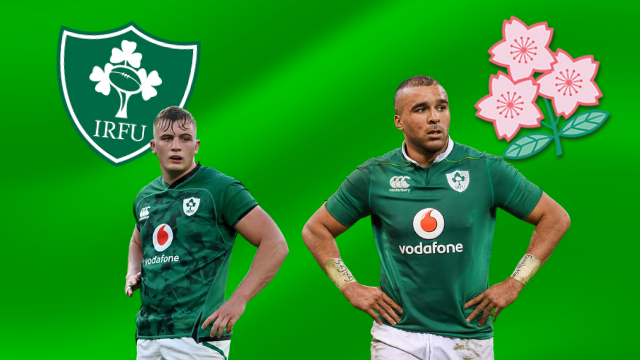