Come the end of the 2016 Six Nations the Irish rugby team was lampooned as one in disarray, especially given the 2015 Rugby World Cup quarter-final exit at the hands of Argentina. What a difference a year can make: in that period Joe Schmidt’s team have accumulated a first-ever Tri-Nations Grand Slam with wins over South Africa, New Zealand and Australia.

The starting team is also radically altered from the one that finished on the losing end to the Pumas in Cardiff last October - with only seven starters from that day featuring on Saturday in the first XV against the Wallabies - as Schmidt oversees a full World Cup cycle for the first time, having only taken over halfway through the last cycle in 2013.

Since that World Cup exit, we’ve seen a significant number of players removed from the immediate competition for places due to injury: notably Dave Kearney, Fergus McFadden, Jordi Murphy and Mike Ross. This is not to mention the retirement of legend and stalwart Paul O’Connell at second row vacating a huge vacuum, which Devin Toner has ably stepped into. And likewise the retirement of Luke Fitzgerald on the wing, which has solidified who are the first-choice options on the flank and also shown a chink of light to those coming through the ranks.

At tighthead, Nathan White’s retirement, alongside Mike Ross’ injury lay-off, and Marty Moore's move to Wasps and apparent exclusion from the Ireland setup, has directly led to the burgeoning of Tadhg Furlong’s career this November.

Ian Madigan is the most unfortunate absentee on the list. From second-choice out-half at RWC 2015, his big money move to Bordeaux has seen the former Leinster playmaker disappear from view in terms of selection; had he stayed in Ireland he would surely have started against both Canada and the Wallabies. It's worth noting that Madigan has been sidelined with a groin injury since the end of October; however, he was omitted from the squad prior to confirmation of his injury lay-off. 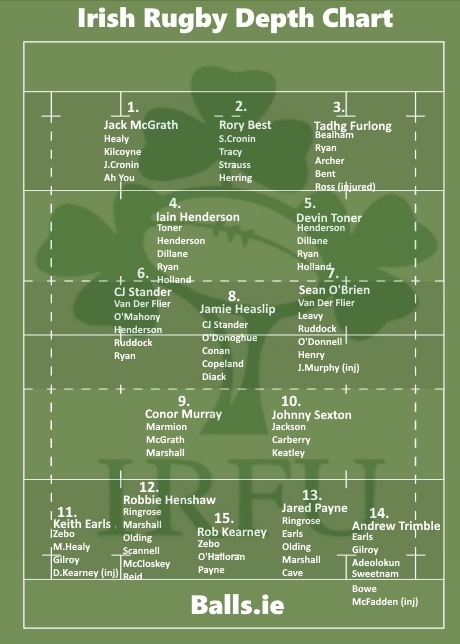 The most defined part of the team. Jack McGrath, Rory Best and Tadhg Furlong are nailed on as the front row. Cian Healy may have something to say about that come springtime though.

Devin Toner and his lineout ability is the rock around which the second-row unit is built. Iain Henderson at this moment has the nudge on both Ultan Dillane and Donnacha Ryan to start as his partner.

Jamie Heaslip at No 8 and CJ Stander at No 6 are nailed on. Openside has been fluid with Sean O’Brien first choice when fit but Josh van der Flier looking a very able deputy. Peter O’Mahony is the other man in the mix, he was superb in a cameo role against Australia but where can he force his way into the side?

An area of a real lack of depth for Ireland. Conor Murray is first choice, and with Johnny Sexton in and out of the team due to injury, the chances to rest Murray have been avoided, Kieran Marmion and Luke McGrath need more game time – likely on the summer tour next June – to gain valuable experience. Behind Sexton at 10, Paddy Jackson has stepped into the void left by Ian Madigan’s Leinster exit to Bordeaux and subsequent exclusion from the Irish setup, with Joey Carberry looking like the long-term successor.

Joe Schmidt has his preferred back line: Rob Kearney, Andrew Trimble, Jared Payne, Robbie Henshaw, Keith Earls, Johnny Sexton, Conor Murray. However, question marks surround the long-term viability of Kearney and Trimble - there are a shedload of options come into their slots should either player drop down the pecking order.