'It Was So Unhealthy, I Had Screenshots Of What This Person Said On My Phone'

Jack Carty remembers a time in his rugby career when he looked for validation not from his coaches or teammates but random people online.

"I have to hold my hands up, I would have done it after every game," the Connacht and Ireland out-half, an ambassador for the Tackle Your Feelings campaign, said on Wednesday.

"I'd have waited until after the coach spoke. Where it was after a loss where you don't want to be seen on the phone, you'd kind of turn into the corner of your locker and type your name into Twitter. The first five or six things you would have read would have dictated how the game went, that's how I saw it back in the day.

"Some of it wasn't even particularly that harsh. It was just, 'Jack Carty was shite today' or 'Why is he our out-half, can we not get someone else?' It could be something as small as that and it would linger for days and days.

"But then there would be other situations. Facebook of all things, there was a certain individual who was mentioned in the video that, over a period of time, had written stuff. I remember it was so unhealthy for me, I had screenshots of what this person had said on my phone. I was using it as a thing for motivation.

"I was on my holidays in Greece and I was looking at what this person had said to try and motivate myself to get better. There was a function I was at and I saw this fella. He said, 'Howiya Jack' and I was thinking, 'Will I say something to this person because I've obviously had this at the forefront of my thinking for such a long time?'

"I eventually said it, 'Look, some of the stuff you said... you're not really writing anything about me anymore,' this was last season and he goes, 'That's because you're playing well'.

"When I look back on it now, the fact that I had spent so much time thinking about what I'd say to this person, it was such a liberating experience because I realised, 'Why did I put so much thought and anxiety into what that person was saying?'"

The 27-year-old believes that drinking in that negativity after a game adversely affected his training in the week which followed.

When it came around to the following game, it would be out of my head but for that Monday, Tuesday, Wednesday, it would have been at the forefront of my thinking coming into training - thinking that I'd played a bad game and building up these cortisol levels about making a mistake or thinking things would be brought up in a meeting but they were literally nothing, just some person's opinion online.

I remember with my girlfriend at the time, say after a Friday game, my weekend would have been ruined because I would be thinking about what a certain person would have said.

Carty eventually found a route out of that cycle by visiting Niamh Fitzpatrick, a psychologist who works with the Irish Olympic team.

"I spoke to her about my application in training," he said.

"I talked a good bit about mental health in terms of that and I just tried to find fun in playing and training again.

"Then in terms of how I kept my mood, I used the Tackle Your Feelings app, which I use extensively still and used a good bit over in Japan.

"That kind of kept me in equilibrium and I tried to get some level of consistency in my performance and that was done through preparing my week, having goals every week, and motivating myself to get better.

"It was just being aware of my thoughts and trying to focus on the immediate, not thinking about the past or the future, just trying to stay in the present." 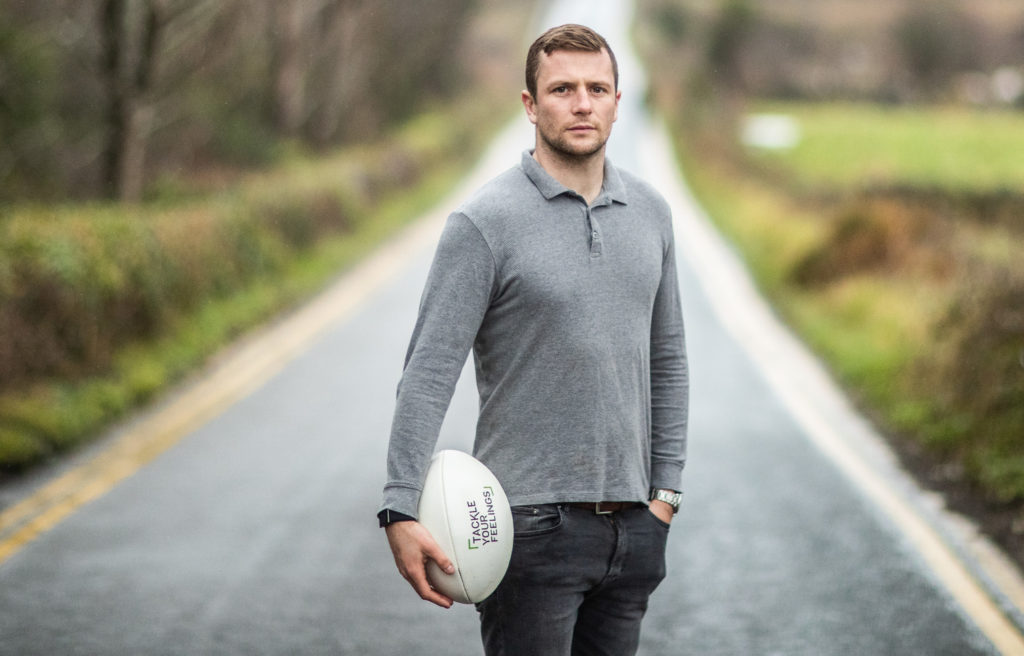 Carty believes that change in his thought process set him on the path he walked last year, one which led to his first Ireland cap and being a member of Ireland's World Cup squad.

"I'd love to say it was like flicking a switch and it happened overnight," he said.

"I think you probably would have seen the product last year over the whole season but it was something that there was incremental steps for a period of 18 months before that. All the things I had done stacked up on top of each other.

"People think success looks like that [sharply rising graph], but it's really like [ups and downs] and you manage to get to where you are. Since that, I've went down and dipped again but fortunately enough, I've bounced back again.

Jack Carty was on hand to lend his support to the #ImTakingControl campaign which encourages people to ‘Take Control’ of their mental wellbeing using principles from both sport and positive psychology. Research commissioned by Zurich & Rugby Players Ireland and conducted by iReach across the island of Ireland, prior to the Covid-19 pandemic, revealed one in every ten adults have been victims of online bullying.

See Also: How Connacht Players Are Training During The Covid-19 Emergency

Rugby
2 months ago
By Gary Connaughton
Where To Watch Connacht Vs Toulouse? TV Details For Champions Cup Clash
1