Ireland suffered yet again last eight exit last month, this time at the hands of New Zealand. It ensures the record of never reaching a semi-final continues and for Schmidt, this was particularly dispiriting for the fans. 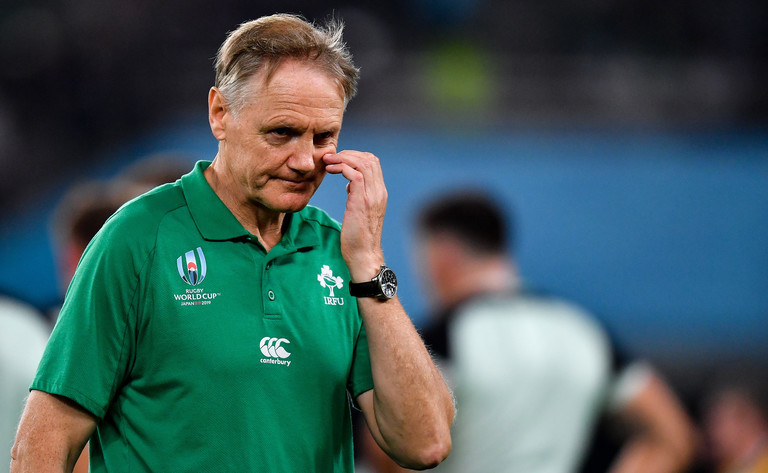 "I am probably my own worst critic. I can see why people are upset or disappointed particularly by that last performance in the World Cup because I was every bit as disappointed as were the players. It has been hard to get over but time marches on.

When asked does he give himself a hard time over Japan, he replied "Yes. I think so."

"I don't know if any of the audience were there but just before the game when the All Blacks were doing the Haka, the Fields of Athenry was unbelievable.

"You could not hear the Haka and they had microphones out for the Haka. The Fields of Athenry was incredible.

We had fantastic support. You are disappointed for yourself, but all those people have travelled over to support you. You are totally disappointed for them. I know a number of them had tickets for semi-finals as well.

The former Ireland coach was also surprised by Brian O'Driscoll during the interview, who paid tribute to the legacy.

"Of course there is disappointment around the World Cup. We all want to get to that elusive semi-final and we will get there at some point. But let's not lose sight of what went on before that. Beating the All Blacks for the first time.

"We waited 61 years for a Grand Slam in 2009. We only had to wait another nine or ten thanks to that group of players and Joe. There has been so much great stuff."

Rugby
1 day ago
By Gary Connaughton
Matt Williams Calls Out 'Ignorance' Towards Leo Cullen's Leinster Achievements
Rugby
3 days ago
By Gary Connaughton
Williams & Quinlan Worried By Ireland's Fly-Half Options Ahead Of Six Nations
Rugby
4 days ago
By Colman Stanley
Heaslip And Quinlan Say Tadhg Beirne Has To Start For Ireland
Popular on Balls
The Rewind
1 day ago
By Gary Connaughton
Quiz: From Which Irish County Did This Company/Product Originate?
GAA
8 hours ago
By PJ Browne
Insane Drama As Late TJ Reid Goal Sends Ballyhale Into All-Ireland Final
The Rewind
2 days ago
By Jonathan Byrne
The Story Of Meat Loaf's Tour In Ireland During The Troubles Is Remarkable
Football
6 hours ago
By Jonathan Byrne
Roy Keane Enjoyed Dig At Harry Kane For Referee Bias Being 'England Captain'