Johnny Sexton was one of Ireland's best players in the Six Nations, as he marshaled them towards a historic Grand Slam. While he endured mixed results off the tee, Sexton was superb in open play and a key operator both offensively and defensively.

Going into the tournament Sexton's last concern was a failed head injury assessment which threatened his involvement in the St. Stephen's Day intro-pro against Munster. Ross Byrne started that game. Leo Cullen proceeded by managing his game time, with Sexton returning and scoring a try during their Champions Cup tie with Glasgow before Byrne started the next game against Montpellier.

The 32-year-old started every Ireland game, despite suffering several knocks and bruises along the way. He sat out part of the captain's run before the Wales game to receive some additional attention to his lower back. Per the Irish Independent, he then suffered a gluteal muscle injury during that Welsh victory. The Irish out-half did miss the opening conversion as well as two penalties during that game but was outstanding nevertheless, particularly in his relentless first-up tackling. 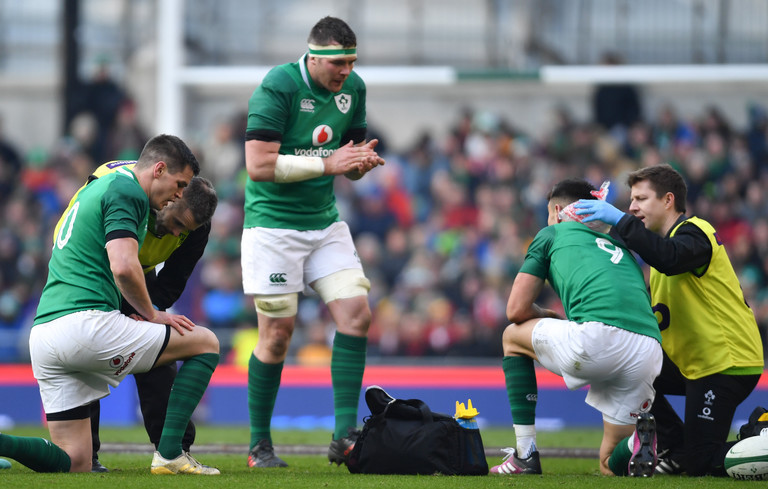 Yesterday in Twickenham Sexton was removed from play for a HIA after bloodening his nose. He passed and returned to command Ireland's efficient attacking unit and claim the Grand Slam he so desperately craved.

After the game Joe Schmidt referenced Sexton as someone he was delighted for and the Irish Independent reported Schmidt understands where Sexton's bumps and bruises come from: "He actually felt really good today, going into the game. Johnny attracts a fair bit of attention, and he's perfectly happy with that."

Some of the attention he brings on himself, trying to smash people back when he's standing on the tryline, making sure they don't get over it. That's how he bloodied his nose in the first place. Then he was fine, he was totally coherent, but he was starting to fatigue, for sure, just because of the workload, his confrontational tackle ability, his commitment and general insanity.

There is no doubt the Leinster man is more aggressive than many first five-eighths in terms of his willingness to contribute to in all areas of the game. It is part of the reason he is one of the best in the world. Next up for Sexton is a Champions Cup run, with Saracens on the horizon.