It took three weeks to transform Leinster from a disheartening low to a dazzling high. "The lowest point of all our careers," is how captain Johnny Sexton described the Champions Cup final loss to Saracens. Saturday's end of season silverware was the ideal tonic.

There are lessons in hardship. The teachings from Newcastle were applied in Glasgow. It was never more apparent than before half-time during the Pro14 final, a situation strikingly similar to the European final unfolded. Leinster under pressure with the clock in the red, an overlap out wide, Jordan Larmour scrambling to cover. The read was bad and the result brutal.

Saracens hit back with a bang! ?

A superb try finished off by Sean Maitland and we're level heading into half-time!#ChampionsCup pic.twitter.com/t8QjYNHG8k

This time, Larmour and his team were not going to be beaten. When the ball went wide, he lined DTH van der Merwe up and launched him into touch. The significance of that moment wasn't lost on Sexton, who immediately confronted the young winger to celebrate with him.

Speaking after the game, Sexton was defiant about marking that moment: "I was in Jordan's face because it was a great tackle. A huge play." 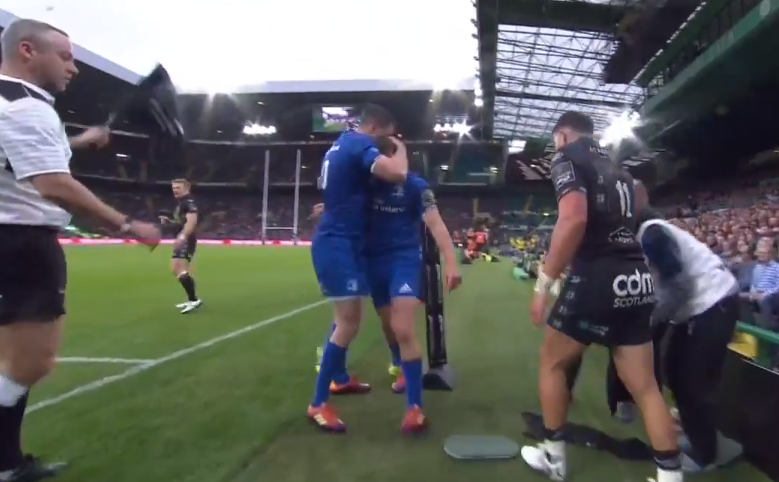 The starting back three in Celtic Park was exactly the same as last year's final but Larmour looked a level above throughout this campaign, particularly in defence. What was once a tad raw is becoming more reliable and Sexton is quick to hail the winger's performance.

He was huge, he came up with some big plays. But it's the learnings. We conceded on that side of the pitch against Saracens just before half-time. Jordan would say himself that he could've dealt with that situation better if he had it back again. We'd all do things differently in the Saracens game if we could have it back again.

He learnt his lessons and he came up with a huge play. That's why I was so happy for him. It was a great tackle. Van der Merwe is a serious player, very strong, very elusive. He broke so many tackles.

Jordo' made that one count.

GAA
3 weeks ago
By PJ Browne
A Kilkenny Company Is Revolutionising Hamstring Training
Rugby
1 month ago
By PJ Browne
Seven Years After Leaving Munster, Danny Barnes Is Happier Than Ever
Football
2 months ago
By Balls Team
5 Of The Worst Sporting Movie Scenes Of All Time
Popular on Balls
Football
11 hours ago
By Paul Moore
Bohemians Apologise For Listing Danny Mandroiu As 'Gargled' In Team News Gaffe
9