When the advent of professionalism in rugby came back in 1995, Scotland was unsure of which route it would go. The first season of the Heineken Cup in 1995–96 was run without any Scottish teams. The Scottish Rugby Union held successive meetings and EGMs in a bid to come to an agreement.

Scotland was left behind by fast-embracing Ireland and eagerly attempted to make up the gap ever since. After an enthralling affair in a rain-soaked Celtic Park, the evidence suggests the gap is closing. The country's top two sides, both of whom boast the bulk of international representatives who will do battle in 120 days time for the opening World Cup game, produced an exceedingly entertaining Pro14 final in Glasgow.

Prior to this game, Leo Cullen spent a lot of time talking about width, the Saracens result still ringing in his ears. There was never any doubt Glasgow would bring exactly that and they did so from the off with Tommy Seymour threatening early on.

It was the home side who struck first through the force of Fagerson. The defending champions immediately responded with a score conjured out of nothing, Luke McGrath's block down and Ringrose's pace presenting a fortunate try. Soon after Cian Healy was presented with an opportunity within yards of the line, the result was never in doubt.

A second-half penalty was Leinster's only second-half scoreboard activity but that's not to see on-field matters were anything sort of engrossing. A late Glasgow blow with Grant Stewart touching down in the corner made for a frantic finish.

Despite dwindling at times, Leinster got it done.

As assured as ever. Two lovely offloads and plenty of attacking activity, a showing that certainly proved he has plenty left to offer. Extremely lucky to avoid red after crashing into an airborne Stuart Hogg. 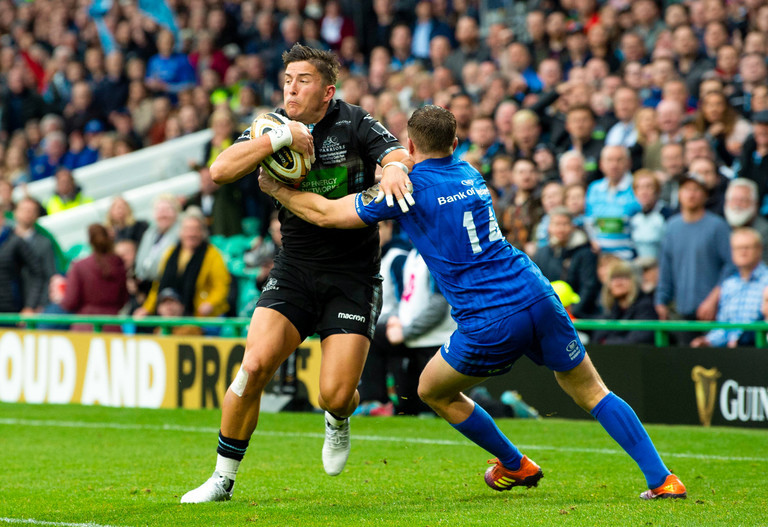 His breakaways were promising but more impressive was his work on the other side of the ball. Great scramble to avoid what looked a certain try before Hastings' penalty. Finished the first half with a booming tackle into touch. 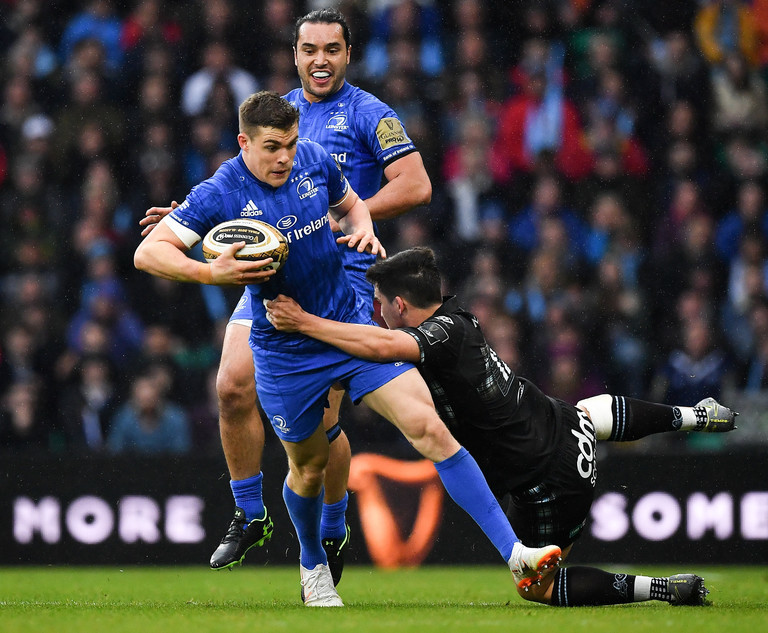 Took the try well thanks to great endeavour but his contribution to Leinster's second was all class. Carried twice, ping-ponging his way within a yard of the line before the forwards took over with a pick and go over the line.

Heavily involved in the second half move which saw both in terms of his running and his demonstrations with referee Nigel Owens. The most line-breaks of anyone on the field. Exceptional team-work with his partner to perform a perfect choke tackle near the end.

An awesome athlete. That hit behind the try line just after the hour mark epitomised so much of what he is about. Finished with three defenders beaten. Skill and steel in equal measure.

Kicked well and finished with a huge 55 metres gained. A bundle of energy.

Returning to the starting team after Ross Byrne played the majority of the semi-final but an early hit seemed to take its toll. His kicking from the tee was wayward early on, missing both a penalty and a conversion. An overcooked line-out landed in his lap and he fumbled it. Glasgow's break into Leinster's half just prior to the break came directly off Sexton misjudging a shoot out of the line.

Despite those blots on the copybook, he still did a lot right. A return to world-class form is not that far away.

His first box-kick was spot on and Leinster regained possession thanks to it. It was the scrum-half's charge down that led to Garry Ringrose's try. Hastings looked to catch him out when he kicked into the backfield but McGrath recovered remarkably well to collect and find touch in Glasgow's half. 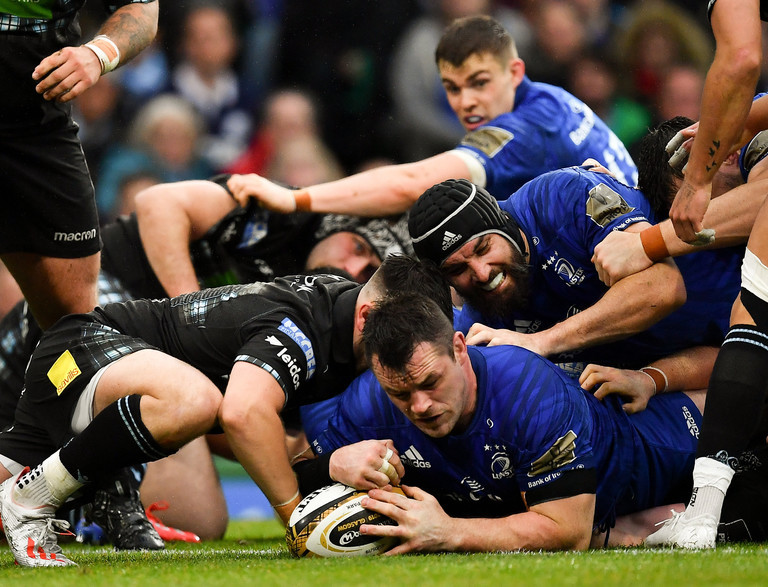 Fresh from signing a new contract, Healy showed why with a dominant display in the set-piece and the loose. A superb scrum just before half-time directly led to Leinster extending their lead by five before the break.

During the warm-up, Leo Cullen finished up watching over the line-out. It took three throws to find the jumper. It was a line-out malfunction early in the game that also allowed Glasgow go over for their first try.

As he often does, made up for it in the loose. So close to the complete product.

One of the real areas of dominance was the scrum and Furlong was naturally crucial to that. For all the deserved praise his skill-set get, the Wexford man has the bread and butter stuff down.

Replaced by Andrew Porter midway through the second half, who maintained standards.

A really intelligent rugby player who commanded the maul well and got through plenty of defensive work early on, reaching double digits in his tackle count by half-time.

21 tackles, 12 carries. In the face of another crucial clash with a massive foe in the form of Jonny Gray, he didn't flinch. 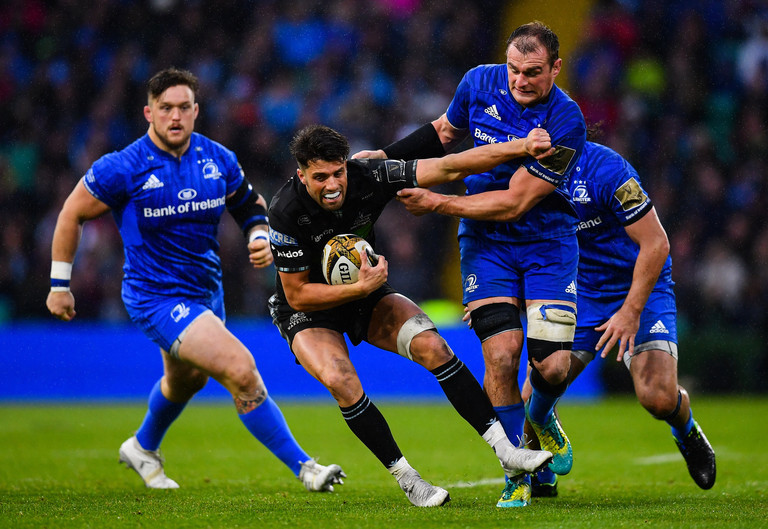 Where to start? You could take a frankly ridiculous tackle count, which exceeded 20 after just 45 minutes. You could take that jolting hit as Glasgow grew towards the line only to be turned over and marched 90 yards back down the other end.

Or you could take the fact that despite every time he is called upon, whether it be from the bench or starting, Ruddock delivers his usual consistent contribution. It's performances like his last two which explains why Leinster were willing to let Sean O'Brien go.

It is astonishing how fit van der Flier looks despite coming back from a lengthy layoff. From the second week in a row, his tackle count was monstrous and his mileage considerable. But the numbers only tell part of the tale. Even if his jackals are not successful, they are often effective in slowing down a sweeping attack and stealing significant seconds for Leinster to realign.

On the other side of the ball, was hit hard when attempting a carry in a promising position which resulted in a knock-on. Hard to fault him for attacking inaccuracies when his defence as it was.

Replaced by Max Deegan in the final minutes.

Carried well, his footwork continues to impress. A brilliant body of work this season.

For the second time this decade, Leinster have done a Pro14 double. Equally as exciting is the fact that the final competitive game of the season was a thriller, and we'll see the bulk of participants go at it again in September for next season's opener.

SEE ALSO: 'I Was Just Completely Sick Of It. At The Time It Was Like The World Had Ended'