Reporting from the RDS Arena.

A suffocating blue wave that left little room to breathe. Munster were met with an almighty hometown embrace and sent packing in a 24-9 defeat.

"It will be weird being in the other dressing room," explained Joey Carbery midweek. "Some of them would be really good mates of mine, but at the end of the day I’ve got to go out and do my job and I’m doing it for the side I want to be doing it for."

There were welcomes aplenty. Jack Conan and Garry Ringrose were both overcome with enthusiasm that they raced to greet the former Leinster man with exuberant force early on.

Ross Byrne got the home side off to a positive start with a penalty from the 40, Joey Carbery returned the favour minutes later. The two young challengers, competing with each other still. This time it was at centre stage. 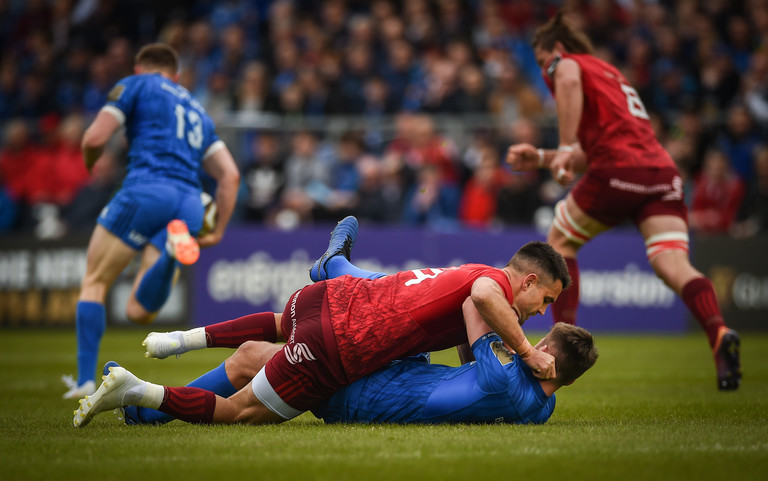 The real joy in the inter-pros is their ability to produce tussle and needle despite the bulk of participants being team-mates at international level. United in green yet maintaining a deep divide between blue and red. The team of us fractured to become an 'us against them.'

One of the most common tropes in pop culture is that very phenonium, the 'we used to be friends'. A transformation from a once-tight bond to a battle in different competition against each other. Think Captain America vs Iron Man, Elliot and JD from Scrubs, Eddie Guerrero and Rey Mysterio in WWE.

And so it continued this way. Team-mates turned rivals. After Munster forced a scrum penalty Chris Farrell come storming down the inside channel off the line-out and barrelled into Robbie Henshaw. Garry Ringrose responded by dancing through Munster's centre partnership and penetrating deep into the other half.

CJ Stander nearly created a crater in the turf such was the force he sat down Rhys Ruddock with.

James Lowe was sentenced to the sin bin for an intercept attempt deemed deliberate but Johann Van Graan's outfit failed to make it count. Come his return it was six all, by half-time Leinster led by three. A Byrne penalty on the stroke of the whistle edging them ahead.

Niall Scannell lost his race to get back into the defensive line and Munster were again punished with a yellow card and converted penalty. A classy Carbery kick to the corner and subsequent turnover cut the gap to three but the telling blow landed. 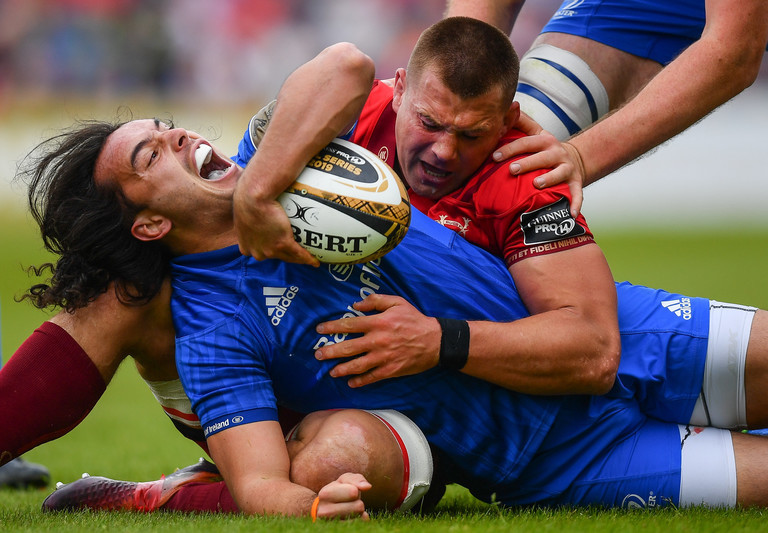 Leinster's luxury was never more apparent than in the second half. Consider the case of CJ Stander. Uber-consistent, a constant carrier and epitomises relentless work-rate. Yet his bid to improve a dip in recent standards came with a shift to openside flanker. Structural adjustment.

In contrast, Leinster have fixated on skill-set adjustment. Under the stewardship of Stuart Lancaster, the shift has been stark. It was soft hands and smart lines from the front-row union of Cian Healy, Tadhg Furlong and Sean Cronin which set the hooker free in the corner to make it 19 - 9.

Sexton was introduced and immediately slit through a fractured defence with a special dummy. The first man at his shoulder running a typical support line was Jack Conan. A phase later, Furlong was in at scrum-half. It's a level of sophistication reserved for Europe's elite and the future direction for rugby as a whole. The only caveat comes in that it was the same speciality lacking in Newcastle.

Stander, like most of his team-mates, was out-thought and out-fought by his chief rival, Jack Conan. He finished with more tackles, more yards and had much more of an impact. The Ireland number eight spot is now no certainty.

Equally as crucial was the contribution of Josh van der Flier, who will have down his own World Cup aspirations no harm either. The value of a traditional openside was obvious for the entire RDS to see. He finished with fifteen tackles, none missed and eight carries for good measure.

Consider this, since Leo Cullen's arrival in 2015 the only new signing who started today was the outstanding James Lowe. The icing on top of a considerable cake.

For Munster, recent signings in the form of Joey Carbery, Tadhg Beirne, Mike Haley, Arno Botha and Alby Mathewson all played. Yet 12 months on, it's four semi-finals, four losses. Fixation on personnel does little to hide the fact that there is something more intrinsic lacking.

The red army now know their level. Today's lesson showed what they need to do next to improve it.

Rugby
10 months ago
By Maurice Brosnan
The Ireland Team We Want To See Start Against France
Rugby
4 years ago
By Sam Moore
Joe Schmidt's 'Rabbits' Will See Us Past France According To Gordon D'Arcy
Popular on Balls
Football
9 hours ago
By Gary Connaughton
McCarthy Stresses Form, But Will He Practice What He Preaches In Irish Midfield?
4