Ulster coach Dan McFarland spoke pre-game about the fullback describing him as "a point of difference", and he was proved right.

The jinky and electric Lowry put in another exciting shift that would have been greatly pleasing to Andy Farrell, who rewarded Lowry's recent form by selecting him in the Irish squad earlier in the week.

Lowry repaid Farrell with another excellent performance that included a try, 57 metres off ten carries, and involvements in both Vermeulen's and Balacoune's tries.

Ulster controlled the early stages of the match, and got the game’s first try when captain Rob Herring went over from a driving maul.

Lowry’s try came after 32 minutes with the Clermont defence standing no chance after giving him too much space too close to the line.

The quality of rugby dipped from Ulster, and Clermont were able to keep gain the lead through the boot of veteran Morgan Parra who knocked over four penalties.

Herring then got his second try, a carbon copy of the first, right on the stroke of halftime, and Nathan Doak was able knock over the extras.

Wait for it... BANG! 💥@UlsterRugby's Rob Herring is difficult to stop from that sort of range! 💪#HeinekenChampionsCup pic.twitter.com/GKEDWl4bN8

Herring, who has also been named in Farrell’s squad, will give the Irish coach food for thought over who to select on the bench between himself and Leinster’s Dan Sheehan.

Ulster began to pull away in the second half and it was Lowry again who helped set up a try for Duane Vermeulen just after the break, after nearly goin over himself after a run down the touchline.

Ulster's lead was 34-12 after a 65th minute Robert Balacoune try, but Clermont began to play unstoppable rugby seemingly out of nowhere. The French side came back and scored three tries in six minutes to get within three points. Ulster, however, managed to hold on.

See Also: Jimmy O'Brien Announced His Arrival On The Biggest Stage This Afternoon 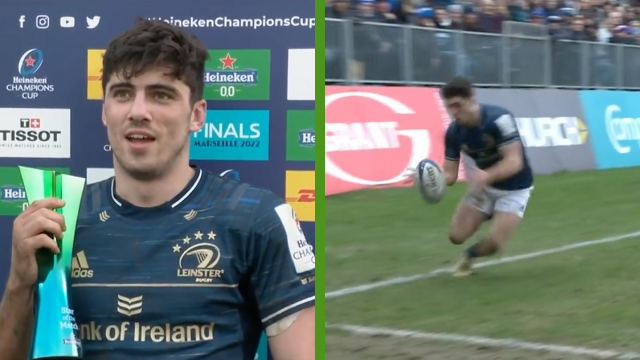 Rugby
1 week ago
By Colman Stanley
Predictions And Permutations For The Provinces In Final Weekend Of The URC
Rugby
1 month ago
By Michael Bolton
How To Watch Ulster v Munster In The URC
Rugby
1 month ago
By Michael Bolton
Stephen Ferris Is Confident Ulster Can Finish The Job Against Toulouse
Popular on Balls
Motorsport
2 days ago
By Eoin Harrington
F1: New Team Radio Clips Show Sergio Perez Frustration With Team Orders In Barcelona
Football
1 day ago
By PJ Browne
Five Things Learned From Stephen Kenny's Nations League Press Conference
Football
9 hours ago
By Gary Connaughton
Gary Neville Was Not Happy With Jamie Carragher's Comments About Marcus Rashford
35