Where To Watch Connacht Vs Toulouse? TV Details For Champions Cup Clash

The Irish side face a decisive Champions Cup game this afternoon, we have all the details on where to watch Connacht vs Toulouse.

Where to watch Connacht Vs Toulouse?

Connacht vs Toulouse kicks off at 3.15pm this afternoon, with the game being broadcast live on BT Sport 3. Coverage gets underway at 3pm.

Both Jack Carty and Bundee Aki return to the Connacht team after sitting out the last couple of games, with other Irish internationals Finlay Bealham, Ultan Dillane and Matt Healy also being drafted into the starting XV.

Elsewhere, Jarrad Butler and Colby Fainga’a have recovered from injury to take their place in the side. 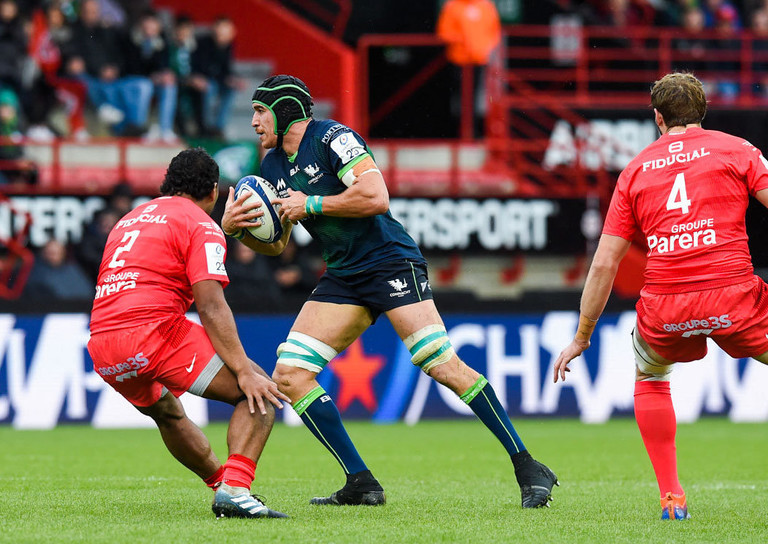 The Toulouse side features a number of well-known names, including World Cup winning winger Cheslin Kolbe.

This game is a must win for Connacht in order to keep alive their hopes of reaching the quarter finals. That will be no easy task, with Toulouse having won all four of their games in the competition up to this point.

Connacht have won two of their contest thus far, but actually sit in third place in the group. Despite Gloucester winning only one match, their tally of five bonus points leaves them ahead of the Irish province in the standings.

Connacht travel to Montpellier in their final pool game, where another victory will be required.

With the Six Nations only a matter of weeks away these two games will act as a final chance to impress Ireland coach Andy Farrell. Jack Carty will have his eye on a place in the squad after injuries to Jonathan Sexton and Joey Carbery, while Bundee Aki will be hoping to hold off the competition to retain his place in the starting XV.

SEE ALSO: 'Donncha Has Been Getting A Hard Time From Some of the Munster Guys For Being Honest'

Rugby
1 week ago
By Gary Connaughton
Watch: O'Driscoll And Dallaglio Speak Nothing But Sense On Saracens Mess
2

Rugby
1 week ago
By Gary Connaughton
Stunning Will Addison Offload The Highlight As Ulster Secure Quarter Final Spot
Rugby
1 week ago
By Aonghus Ó Maicín
Where To Watch Ulster Vs Bath? TV Details For Champions Cup Clash
Previous Next