How To Watch Ireland At The U20 Rugby World Cup

While we wait for the senior tournament in September, the U20 Rugby World Cup is set to kick off in Argentina on Tuesday.

Ireland head into the tournament looking to make up for last year's disappointment which almost saw them relegated from the top tier of competition after finishing 11th out of the 12 competing teams.

This season has been far more kind to Noel McNamara's men as they sealed just the second U20 Grand Slam in Irish history during the Six Nations, averaging 30 points a game on their way to the title.

We've already taken a look at the forwards in the Irish pack to keep an eye on in Argentina, so let us take you through how to actually watch all the games as Ireland look to go one step further than they did in 2016 and finally lift the trophy for the first time.

The U20 Rugby World Cup kicks off on Tuesday, June 4 with the pool stages running for eight days. Unlike the senior tournament where fixtures are staggered, each team will play on the same days with matches taking place on June 4, June 8 and June 12.

The knockout stages, which will feature all 12 teams, will then kick off on Monday, June 17 before finishing on Saturday, June 22.

What channel is it on?

All the games will be shown live in Eir Sport, with ITV4 showing a highlights package each night during the pool stages at 11pm and broadcasting the knockout rounds live.

World Rugby will also be streaming each game live on their website. Though these streams will be available to viewers in Northern Ireland, they won't be made available in the Republic of Ireland because of World Rugby's deal with Eir Sport.

Who are Ireland playing?

Ireland's punishment for finishing 11th in the U20 Rugby World Cup last year is being paired in a group with England, Australia and Italy.

Four days later, Ireland will learn their fate for the knockout stages when they face Italy at 2.30pm on Wednesday, June 12.

While it's not clear yet who will be the opponents in the next round, Ireland will play their final two knockout games on Monday, June 17 and Saturday, June 22. 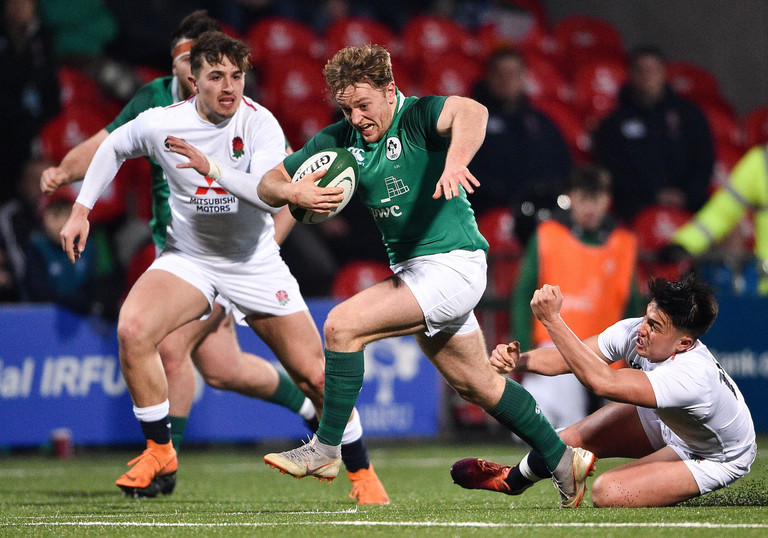 How do the knockout stages work?

With three groups of four teams, the knockout rounds of the U20 Rugby World Cup are a little complicated. Each team is guaranteed to play five games at the tournament - three pool games and two knockout matches.

Essentially, the tournament breaks off into three sections at the end of the pool stages, with the three group winners advancing to the final playoffs alongside the best pool runner up.

The 12th-ranked team at the end of the tournament will then be relegated ahead of next year's competition, to be replaced by the winner of the World Rugby U20 Trophy, which will be contested in Brazil in July.

Read More: Four Irish Backs To Watch At The U20 Rugby World Cup In Argentina

U20 World Cup u20 rugby world rugby u20 championship