Ronnie O'Sullivan has come out and explained his "lack of atmosphere" comments at the Northern Ireland Open, insisting he wasn't having a go at the Belfast snooker fans.

After the 'Rocket' won his first round match against Andy Hicks, he spoke to Eurosport bemoaning the lack of atmosphere at the Belfast venue, while also admitting he got "bored" during his victory.

"I struggled with the atmosphere. There was really no atmosphere out there. I'm playing alright, so normally I can generate the atmosphere but, I don't know," O'Sullivan told Eurosport on Monday evening.

O'Sullivan came out to clarify his comments - after completing his 4-1 second-round win over Alfie Burden - explaining that he was having a go at the venue and not the fans.

"When I came here last time I said the atmosphere was flat – it’s never got anything to do with the crowd, the Belfast crowd and every crowd all over the world are so enthusiastic," O'Sullivan said on Eurosport.

"It’s just that the set-up out there means you can’t get a good atmosphere because you can’t get anyone down the sides, so you feel like you’re playing to an empty auditorium. Every snooker fan is like family to me, so I’d never criticise any snooker fans."

O'Sullivan often makes headlines for the wrong reasons such as when he was left dumfounded by a ref call at the Champions League Snooker earlier this year. However, the 45-year-old jumped into the conversation again to smile and say he didn't "want any more enemies" before reiterating that he would never have a go at proper snooker fans.

"There's two sides of the fence. I'm more of a people's person, I wouldn't be seen on the establishment's side. So I always respect the fans and the crowd.. I think the venue, the setup, doesn't allow there to be a very good atmosphere." O'Sullivan added.

O’Sullivan will face Yan Bingtao, who defeated 4-0 Oli Lines 4-0, in the next round of the Northern Ireland Open and he remains one of the favourites to win the title.

SEE MORE: 'It's Paid Practice For Me': Ronnie O'Sullivan Beats Boredom To Win In Belfast 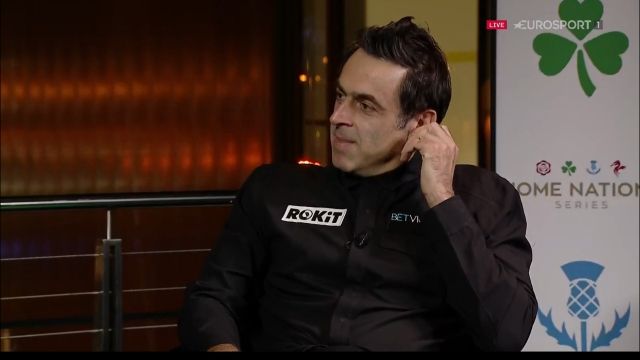 Snooker
3 months ago
By Daniel Hussey
'It's Paid Practice For Me': Ronnie O'Sullivan Beats Boredom To Win In Belfast
Snooker
3 years ago
By Balls Team
Watch: Ronnie O'Sullivan Pulls Off Audacious Pot With Four-Ball Plant
Snooker
4 years ago
By PJ Browne
'He Is A Tool' - Mark King Blasts Ronnie O'Sullivan For Disrespectful Comments
Popular on Balls
Football
2 days ago
By Jonathan Byrne
Report: Festy Ebosele Attracting Interest From Bundesliga And Serie A
Football
9 hours ago
By PJ Browne
'If He Continues With Performances And Goals Like That, Stephen Kenny Will See It'
GAA
2 days ago
By PJ Browne
Army Gave Sue Ramsbottom No Time To Drown Sorrows After Laois All-Ireland Loss
Football
1 day ago
By Jonathan Byrne
Peter Crouch's Stories of Being David Ginola's Bootboy Are Comedy Gold