11 Of The Best Football References In Music History

Football and music have always been intertwined.

From FA Cup final songs to anthems that ingrain themselves into popular culture, the connection between the two outlets cannot be understated.

That's before you delve into the world of footballers trying their hand at the recording arts. Who could forget the halcyon days of Glenn Hoddle and Chris Waddle linking up in the studio to record 'Diamond Lights'? Chris Waddle tried to repeat the trick with Marseille teammate Basile Boli too, the man with the mullet had stars in his eyes.

The modern footballer isn't averse to getting into the recording studio either. Netherlands and Lyon star Memphis Depay has forged a fairly decent rap career, spitting in both English and Dutch. In one of the stranger turns, legendary grime platform Lord of the Mics used their sixth iteration to welcome a clash between two heavyweight battle rappers, Bradley Wright-Phillips and Yannick Bolasie.

Instead, we're looking at lyricists over the years who have used their pen to craft beautiful metaphor and simile around the beautiful game. (As an aside, Yannick Bolasie saying "you will get left in the Park like Ji-Sung" is exactly the kind of lyrics we're looking for).

So, without further ado, here are 11 of the best football references in music history:

Pat Lagoon - Smooth With It

Who's out next? Olé, Olé

Pat Lagoon, a rapper from Waterford, puts on for his hometown with this ode to one of the greatest moments in modern Irish history.

John O'Shea sticking the ball through Luis Figo's legs has replay value beyond any Netflix series or critically-acclaimed movie. The skill is, in itself, a musical number, with O'Shea the composer of a symphony to last generations.

Not satisfied with referencing a hometown hero, Lagoon doubles down on the football reference with a nod to Ireland's national anthem, 'Put 'Em Under Pressure'. Textbook stuff.

Half Man Half Biscuit - This One's For Now

Half Man Half Biscuit are a post-punk act that are probably most well-known for their song about wanting a Dukla Prague away kit for Christmas, but the band from the Wirral have plenty more football references in their discography.

'This One's For Now' remarks that former Aston Villa manager Dr Josef Vengloš is set to take over at Tranmere Rovers. Also in this song is the perfect expression of football fandom, in all its futility.

And I cheer for a corner

I don't know why

They rarely lead to a goal

The band also refused to perform live on Channel 4 because their beloved Tranmere Rovers had a night fixture. A band with conviction, you can't beat it.

Around the same times I used to check Chelsea

I had to tell Chelsea I'm a Hazard

All these fake rappers all need an Oscar

'Cause she begs she wants to go to a nice restaurant

But I'mma buy her a coffee at Costa

This list would be much more scarce if it wasn't for the grime scene. Yungen utilises a double-entendre on the name Chelsea, spinning yarns about a girl he used to know all while checking the names of three former Chelsea players, Eden Hazard, Oscar and Diego Costa. The reference rate is off the scales.

The Pogues - Down All The Days

I have often had to depend on the kindness of strangers

But I've never asked and I never replied

If I supported the Glasgow Rangers

An ode to Christy Brown from The Pogues, which contains a cryptic lyric about neither asking nor telling someone of your footballing allegiance.

The team in question, Rangers, of course are one half of the Old Firm, so no doubt Shane MacGowan was referencing the sectarian bile which was rife between the two sides throughout the 1980s.

'Toaster' is one of the softer cuts off Slowthai's debut album, Nothing Great About Britain, but contains one of the lyrical highpoints.

Who would have thought Ryan Shawcross would have a part to play in an album which was nominated for a Mercury Prize? And all the while, the reference was a positive spin on Shawcross' defensive capabilities? Madness.

On the same album, there's a lovely story of Slowthai's dad trying to get tickets for a Liverpool match, having mixed up his dates and bought tickets for the wrong fixture.

I had an uncle who once played

You can guess what this song is about from the title, but the lyric in question is a non-sequitur, possibly used to impress a young lady.

This tune is from 1991, the same year Red Star won the European Cup, so they were the hip team of the era. Did Billy Bragg's uncle, or the uncle of co-writer Johnny Marr, play for Red Star? Well, strange things happen...

I'll spray whenever you ready

It doesn't look like a standard football reference, but say it back.

JME's lyrics are rarely straightforward, but these football similes are some of the best in the grime scene. Imagine referencing Teddy Sheringham on a song in 2012? Then, imagine it being one of the best lyrics of that year?

Los Campesinos! - All Your Kayfabe Friends

You asked me if I'd be anyone from history

Fact or fiction, dead or alive

Los Campesinos!'s discography is littered with football references, mentioning the curse of Bela Guttman on Benfica, striking it off with someone like Tony Yeboah and likening Middleborough's former striker Joseph-Desire Job to a god.

Therefore, it was tough to whittle it down to just one reference, but we had to go with one referencing former Ireland international Tony Cascarino. The 88-times capped striker had just moved to France to join Marseille and was experiencing a career renaissance in the south of France. Not the worst person to choose when asked that question, by any means.

The entire discographies of Dave and AJ Tracey

Two emcees at the fore of contemporary English music, both Dave and AJ Tracey litter their tracks with football references. The shining example of this is 'Thiago Silva', the song which gave us that glorious 'Alex from Glastonbury' moment from last summer.

Separately, Dave's dexterity with football  lyrics is exemplified best on '100ms'. Here, he threatens people with references to Marcus Rashford and Luke Shaw, with another line talking about taking someone from their dons like Dele Alli. Mad.

AJ Tracey's modus operandi is laid out in 'False 9'. See if you can keep up with all of the references within the track, it's a near impossibility.

It's no surprise that Big Zuu and AJ Tracey are cousins, with their lyrical references all revolving around football.

Here, Zuu makes a very out-there shoutout to Bayern Munich's right-back/centre-mid Joshua Kimmich, but all football references are equal in our world.

Also, it's astounding that there aren't many lyrics citing Nemanja Vidic. The man was a goliath.

If you enjoy elongated metaphors about the Saipan incident and references to the Irish team for the 2002 World Cup, look no further than 'Saipan' by FYNCH.

(It is to be stated now that this song was not created, nor has anything to do with the author of this piece. Anything on the contrary will be perceived as criminal).

See Also: The True Story Behind The Incredible Song That Mick McCarthy Made With Linda Martin 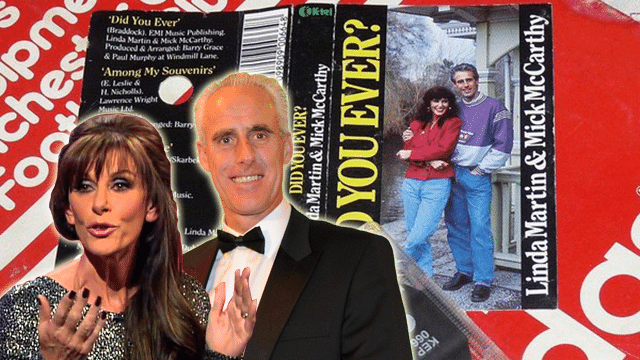 The Rewind
3 days ago
By Jonathan Byrne
5 Brilliant Tommy Tiernan Routines Just Uploaded To YouTube
The Rewind
4 days ago
By Balls Team
Quiz: Can You Get 100% In This Ultimate Test Of Sports Films?
The Rewind
4 days ago
By Gary Connaughton
Watch: Joe Rogan's Vaccine Claims Were Beautifully Dismissed On His Podcast
Popular on Balls
Golf
1 day ago
By PJ Browne
Seamus Power Into World's Top 50 Golfers After Another Great Weekend
Football
22 hours ago
By Gary Connaughton
Some Pundits Are Revelling In Rafael Benitez's Everton Sacking
32