Episodes five and six of Season 15 aired on Thursday in the US ('The Gang Goes To Ireland' and 'The Gang Is Still In Ireland'), and as the episode titles suggest, the gang is navigating the joys and dangers of Ireland.

The trip begins with Mac and Charlie competing to see which of the Irish-Americans is 'most Irish'. One thing that Charlie feels guarantees his Irishness is his bond with his penpal Shelly, his possible brother who he hopes to meet on this holiday.

Do YOU have a shamrock tattoo somewhere on your body? #ireland #mac #SunnyFXX #alwayssunny pic.twitter.com/Hm7yZudAmg

By the end of these episodes, it's patently obvious that Charlie wins the 'most Irish' award. During his journey to the Emerald Isle, Charlie discovers that the language he has been using to write to Shelly is not an imaginary language, as his dear friends told. No, it turns out Charlie can read Irish.

And not only that, it turns out Charlie's pen pal Shelly Kelly is not actually his brother but his father, a cheesemonger played by Colm Meaney. When he encounters his father at his cheesemongers, Charlie learns that he actually possesses the power to speak the cupla focal.

It made for the best example of an American speaking Irish since Obama uttered 'Is feidir linn' on Dame Street.

This does not seem like the end of the gang's sojourn through Ireland. The next two episodes of the programme air next week and are entitled 'Dee Gets Stuck in a Bog' and 'The Gang Carries a Corpse Up a Mountain' so get for more Irish vibes.

The reviews of the Irish episodes of 'It's Always Sunny' are generally positive. According to the AV Club's recapper:

But while an eventful overseas jaunt might smack of the late-run desperation of 80s sitcoms like The Facts Of Life or Family Ties, where creators try to brush off the gathering moss by plunging their aging characters into some disposable, colorful comic intrigue, this two-parter (written by Rob McElhenney, Charlie Day, and Glenn Howerton and directed by Megan Ganz) hits the ground in deliriously confident stride.

SEE ALSO: Here's Our First Look At The 'It's Always Sunny' Gang's Trip To Ireland 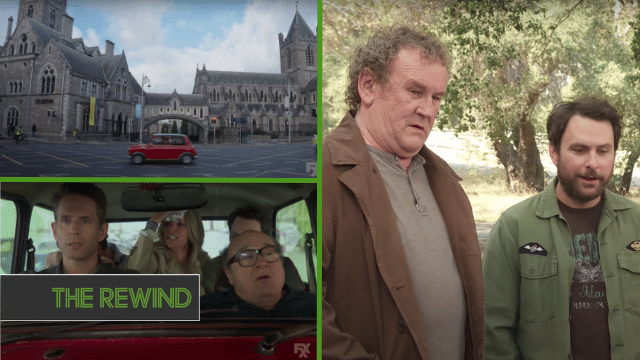