If HBO's and Sky Atlantic's Chernobyl passed you by when it came out in 2019, we understand why. There are few darker subjects we can imagine delving into for five hours. We didn't know enough about the Chernobyl disaster before the series started, but what we did know was grim and upsetting. It was death and mutilation and cancer and Soviet and tragic. What joy could come from learning more?

And yet, if you decided against a trip to the darker side of history, you missed out on the kind of television that is so rarely attempted and even more rarely achieved. Craig Mazin, the creator, writer and producer of the mini-series got so much right, from his accurate depiction of Soviet life in the mid-80s to the casting, especially in Jared Harris, Stellan Skjarsgaard, and Emily Watson.

Over five episodes, Mazin refused to simplify a complicated story, and yet allowed us to understand it. That alone was a masterclass in balance. Not only that, but he, incredibly, got his audience to be emotionally invested in the somehow credible relationship between a bureaucratic Soviet minster and self described "career Party man," and a nuclear physician. If you haven't seen the show, I'm not sure you'd believe that was possible.

Two years ago today, the series culminated with an almost startling level of brilliance. The show paid off the emotional journey of the three main characters, while bringing home the story of exactly how the tragedy occurred with all the drama of a Moscow show trial. The series ended with a heartbreaking reminder of just how real this all was, from the victims to the heroes to the cover-up.

Needless to say, the world was buzzing after a close to perfect hour of television.

Man, Chernobyl is one of those periodic booster shots that inoculate us from the morbid self-loathing that accompanies a career in television. What fine, careful work from HBO and all who labored on it.

#Chernobyl is peerless television on every level. Riveting storytelling, incredible production values and acting of the highest quality. Congratulations to all involved. A masterwork that pays homage to the lives that were tragically lost. @sisterpicstv @skyatlantic @HBO pic.twitter.com/lPOYJUewHs

watched the last of #Chernobyl last night ... captivating & stunning piece of television, easily one of the best things I’ve ever seen ... pic.twitter.com/lZsDQYAr2e

I just finished watching Chernobyl. If you heard about this show and thought "I can't," I get it... but you can and you should. It is five hours of riveting, superbly made television with a deep sense of history and of moral responsibility.

Chernobyl, possibly the greatest TV mini series ever made, is a timely, frightening reminder of the consequences of ignoring/dismissing scientists and scientific evidence.

“Every lie we tell incurs a debt to the truth. Sooner or later, that debt is paid.”
-Valery Legasov

Started watching Chernobyl for some light relief after Liverpool won the European Cup, and saw the finale tonight.

What a stunning piece of work. Absolutely beautifully constructed.

And the acting - quietly devastating.

#Chernobyl episode 5, quite simply wow, one of the most powerful and thought provoking series ever put to television, pulled no punches right from the start and shown in great detail the truth of what happened. One if not the greatest and important TV series ever made!!

Just got done watching the final episode of #ChernobylHBO and all I can say is, this will be long remembered and might just go down in history as one of the greatest feats of television ever. Award worthy doesn’t even touch the tip! Smashing series & congrats to all involved! ⭐️

If you haven't brought yourself to watch Chernobyl yet, we think you've left it long enough. You owe it to yourself to seek it out. The whole series is available to watch on Now TV.

While you're watching, HBO also released an accompanying podcast for each episode with creator Craig Mazin and Peter Sagal that is well worth a listen. 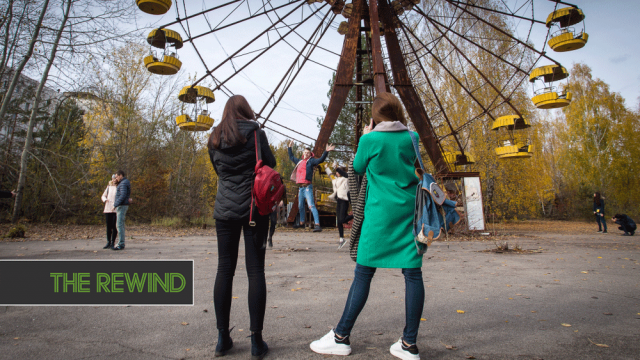