If there's one thing that Irish socialists and far-right, xenophobic, Icke-following, Leave-voting Brits have in common, it's a shared belief that an end to Leo Varadkar's tenure as Irish Taioseach will be for the betterment of Ireland, and maybe even the world.

Today's long-awaited publication of a Programme for Government between Fianna Fail, Fine Gael and the Green Party does that, in a way. If ratified, Micheal Martin will become taoiseach until 2022. After that, the Fine Gael leader will take back the Taoiseach's office. At the moment, we can only presume that person will be Mr Varadkar.

One group that was decidedly pleased with the news that Leo won't be Ireland's prime minister for the foreseeable future was the old bastion of Brexiteering, the Daily Express. Varadkar was Vote Leave's bete noir during the Brexit negotiations and the Express today issued quite a chirpy cheerio to Leo on their website after the news broke from Government buildings. 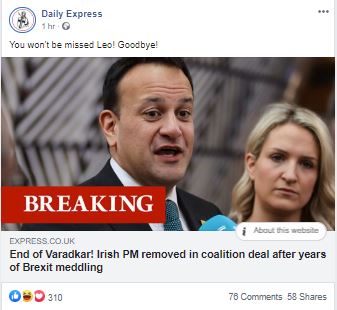 Some readers on the Express's facebook page did stand up for Ireland's former leader.

Sheila Deegan wrote: "This is so inaccurate. Can't believe any journalist could be so careless in reporting this story. This is a historic day in Ireland, two of our biggest political parties have come together willingly with the Green party to form a coalition to bring the country safely out of the Pandemic and get the economy back to the healthy state it was in before."

While Dómhnall McIlfan added: "Standing up for the interests of your country isn't meddling, it's doing your job. I'm increasingly convinced this country would do so better without 17.4 million of its inhabitants but I'd start with the owner and editors of the Express newspaper."

We can't imagine that Leave voters will be massively thrilled with Michéal Martin as taoiseach, but only time will tell.

The Rewind
2 weeks ago
By Gary Connaughton
From Titans To Minnows: How Have Ireland Become So Bad At Eurovision?
69

The Rewind
2 weeks ago
By Balls Team
"Guy Was An Interior Decorator!": 21 Years On From One Of The Best Sopranos Episodes
30

The Rewind
2 weeks ago
By Gary Connaughton
From Titans To Minnows: How Have Ireland Become So Bad At Eurovision?
The Rewind
2 weeks ago
By Balls Team
"Guy Was An Interior Decorator!": 21 Years On From One Of The Best Sopranos Episodes
The Rewind
1 month ago
By Gary Connaughton
Cillian Murphy Moved His Kids Back To Ireland Due To Their 'Posh' English Accents
Popular on Balls
Football
17 hours ago
By Colman Stanley
Valverde Insulted By Salah Comments Ahead Of Champions League Final
Football
19 hours ago
By Gary Connaughton
Report: Cristiano Ronaldo 'Blocked' Manchester United's Antonio Conte Pursuit
Football
22 hours ago
By PJ Browne
McGeady Questions Why He Got So Much Abuse For Choosing Ireland
Football
2 days ago
By Eoin Harrington
Juan Mata Questions Manchester United Management After Dire Season