A Beginner's Guide On How To Speak Like A Cavan Person

In many ways the English language - indeed language itself - is insufficient in its ability to allow a Cavan person express their full range of emotions.

A passionate being, those from the Breffni county have had to come up with their own lexicon in order to fully communicate with each other. Given that Saturday 26 September is #CavanDay, here are just a few of phrases you need to know if you want to understand the Cavan accent:

Another term for 'hello' or when you're asking someone how they got on at a task.

Example: And how long was he out beyont?

No it's not anything to do with drugs. A yoke is a person, place or object.

Example: Hand me over that yoke till I ring mammy to tell her to have the dinner ready.

A more well known term for 'the internet.'

Example: I was on rip.ie earlier and you'll never guess who's dead!

When something happens unbeknownst to you.

Example: Bejaysis you came home aknownt of me last night.

The state of being really really busy.

Pretty much another word for 'that'. Used when referencing things and people mostly.

Example: I was talkin to yon lad the other night and he told me he'll be down with the slurry tank next Monday.

When something is broken beyond repair.

Example: "How's your back after the match yesterday?" "It's in shite."

It's kind of a substitute for 'very' but can also be used as a stand alone adjective.

An expression of excitement when something is about to kick-off. Be it a twist in a great story or a row in a chipper.

Not to be confused with "whisht," "howld your whisht" means to please wait a moment.

Can mean both very bad and very good.

Example: Last night was bedamndible craic but by-jaysis I've a bedamndible head on me this morning.

Another way of saying 'beyont'

Example: Sure his mother doesn't know the last time she's seen sight nor light of him. He's without in America this 12 months.

Used to describe someone who has either just come up with some sort of ingenious plan or is someone who's not to be trusted.

You wouldn't turn a sweet in your mouth

The place was full of people.

Example: "Much craic in The Imperial last night?" "Jays lad you wouldn't turn a sweet in your mouth!"

Example: And you the priest never mentioned that old Mrs Brady was out of the hospital? Jays that's a fret.

This is a phrase used when someone from Cavan needs to vent their frustration at a person or an inanimate object.

Example: Dublin? Well cursed fuckin Jaysis on ye, I needed the car for goin' to look at the cattle!

An appropriate response to any question ever asked in the history of mankind.

Example: "Do you Peter take Paula to be your lawfully wedded wife?" "Sure look."

Used to describe weather that is quite mild.

A proper word but you rarely hear it used elsewhere. Used to describe something that is untidy, unappealing or hugely clumsy.

Example: Don't be gettin' paint all over the skirtin' boards, ye clatty hoor!

How to pronounce various names in Cavan speak:

Eugene is pronounced 'You-Jane' or, for the really hardcore, 'Q-Jane.'

Cillian Sheridan to many, Cillian 'Shurdan' to those from Cavan.

Cavan has the opposite habit to most of the country in that they're well capable of making a 'th' sound. For example, you'll never hear a Cavan person pronouncing the word 'three' as 'tree.' However, they choose to rub this talent in people's faces by insisting to add a 'h' any time a 't' makes an appearance in a word. Butter is pronounced 'butther,' water is 'wather,' tractor is 'thracthor,' and so forth.

Never ever pronounce the 'g' in a word that ends in 'ing.'

For the most part, words that have an 'o' in them warrant the pronunciation 'ow.' 'Cowld,' 'bowld,' 'owld,' etc. However, and this is difficult to write in legible fashion, words that end in the letters 'ow' - which would ironically be pronounced 'o' by general society - are pronounced 'ah.' Barrow changes to 'barrah,' hollow changes to 'hollah,' etc.

In general, you need to be over-dramatic, have at least 45 different ways to describe the weather and, if you're ever in doubt, just say "Aw sure," turn slightly away from the person you're talking to and toss your head up, like you're trying to lightly volley a football with your chin.

Oh, and the C-word is used as term of endearment, so don't be alarmed.

See Also: Cavan Player Explains How He Got One Of The Best Nicknames In GAA 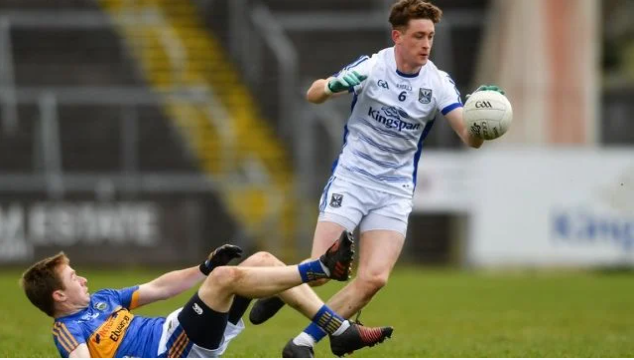 The Rewind
22 minutes ago
By Michael McCarthy
Quiz: How Well Do You Remember The Career Of Troy McClure?
7

The Rewind
23 hours ago
By Mark Farrelly
Quiz: Can You Identify The Sports Movie From The Screenshot?
13

The Rewind
22 minutes ago
By Michael McCarthy
Quiz: How Well Do You Remember The Career Of Troy McClure?
The Rewind
23 hours ago
By Mark Farrelly
Quiz: Can You Identify The Sports Movie From The Screenshot?
GAA
1 day ago
By Balls Team
The Definitive Ranking Of Micheal Ó Muircheartaigh's Greatest Internet Moments
Popular on Balls
Premier League
17 hours ago
By Gary Connaughton
Gary Pallister Reveals Feguson's Dressing Room Reaction To Cantona Kung-Fu Kick
3